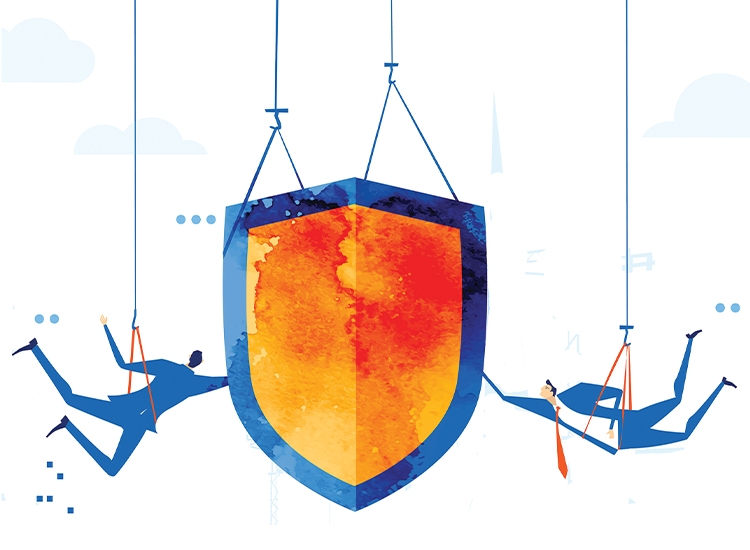 Security teams step up during the pandemic

Looking back over the past eighteen months, it is impressive just how much was taken on by security teams and how roles quickly evolved as so many buildings sadly emptied of people as lockdowns came and went.

Throughout the whole pandemic, the presence of security, be it officers, supervisors or managers has been a constant. The trust and respect for the competence and willingness to help displayed allowed others to follow the government line of ‘work from home if you can’ knowing the day-to-day running of many aspects of premises’ life would be in safe hands with those teams.

In the early stages, employers and anyone managing facilities had the task of unpicking the frequently updated government steers. Everyone learnt to manage a developing situation which they had no experience of.  Those initial responses saw security teams working with facilities colleagues asked to lock down a particular floor pending a deep clean as a result of someone having symptoms or testing positive; and account managers sharing best practices as they evolved.

The role of security rapidly expanded from the familiar and traditional in the weeks that followed as officers became the social distancing monitors to help keep those at work safe. Prior to the pandemic, would it ever have been thought that security would be screening the temperature of those entering a building or sanitising visitor badges before issue?

The comprehensive ‘Working Safely’ guidance and the need for COVID-specific risk assessments required good cooperation and willing compliance essential for such measures to succeed. Here a sound understanding and appreciation of the task in hand was essential for the teams on the ground to be at the forefront of explaining and reassuring those who still needed to be in at work.

As this emphasis became one of how to implement ‘Social Distancing’ for those who could not work from home it was the adaptability of the security team and their workplace colleagues that shone through. With great collaboration, systems were quickly devised, with a particular focus on signage, limiting numbers in lifts, encouraging use of sanitiser dispensers, face coverings, discouraging close contacts and complying with one-way systems.

Watching first hand to see people being redirected away from a door they had habitually used to leave a building, as an example, was interesting – thankfully, most accepted cheerfully and with the good grace that would have been hoped for.

It wasn’t just the new roles around social distancing that were embraced; the Chancellor’s work retention scheme saw many front-of-house and reception staff understandably furloughed as footfall and external visiting largely ceased. This again was an area outside the norm where security personnel stepped up and undertook those functions where needed pending re-occupation.

In May 2020 a new matter to brief the teams on had arisen. The phenomenon of queues forming to gain entry to various premises as they adhered to the social distancing measures was unsurprisingly flagged as risk by CPNI. Genuine concern existed over terrorists using vehicles as weapons to exploit the lines of pedestrians waiting their turn to gain access. Thankfully, this risk was never realised.

As the pandemic continued over the following months the severity of the restrictions fluctuated meaning the likelihood of a return to the workplace for those with alternative options evaporated. To compensate for this, there was not so much a change of role, but a far greater emphasis on an important one rose to the fore. With no natural surveillance from those at workstations, facility issues such a minor leaks, lighting failures or health and safety concerns would not be getting reported as usual. To address this, patrol patterns were adjusted and, where agreed, ventured into areas never previously directed.

The reliance on security for coordination and reporting on the day-to-day facility functions which had become physically delegated to those remaining on sites progressed into other areas in many instances. This became increasingly the case as the opportunities for refurbishments or works held off due to their disruptive nature were understandably seized. Briefing security teams on the risks that construction work could present and checking their understanding on ensuring such works did not impact on the integrity of wider building security measures was again mostly taken in people’s stride.

All the above happened, but at the same time the emphasis on the more traditional functions of security could not be allowed to diminish. The reduced natural surveillance already mentioned brought enhanced risks of unauthorised access or crime, and vigilance for hostile reconnaissance never went away. In respect of the latter, we were regularly reminded of the risk that lockdown would lead to some being influenced and radicalised through the internet, a risk that would increase with crowded places returning as restrictions eased.

As we finally reached the deferred ‘freedom day’ and social distancing become a choice, a new period of transition began, with the role required of security teams once again being adjusted – but this time with significant variations depending on client decisions.

Hopefully, no further role changes will be required, and the more traditional functions will resume as buildings begin to see a return to greater day-to-day use as a workplace.

When the pandemic is finally over, the remarkable effort and resilience seen from so many truly dedicated security staff is one that should be remembered for a long to come.