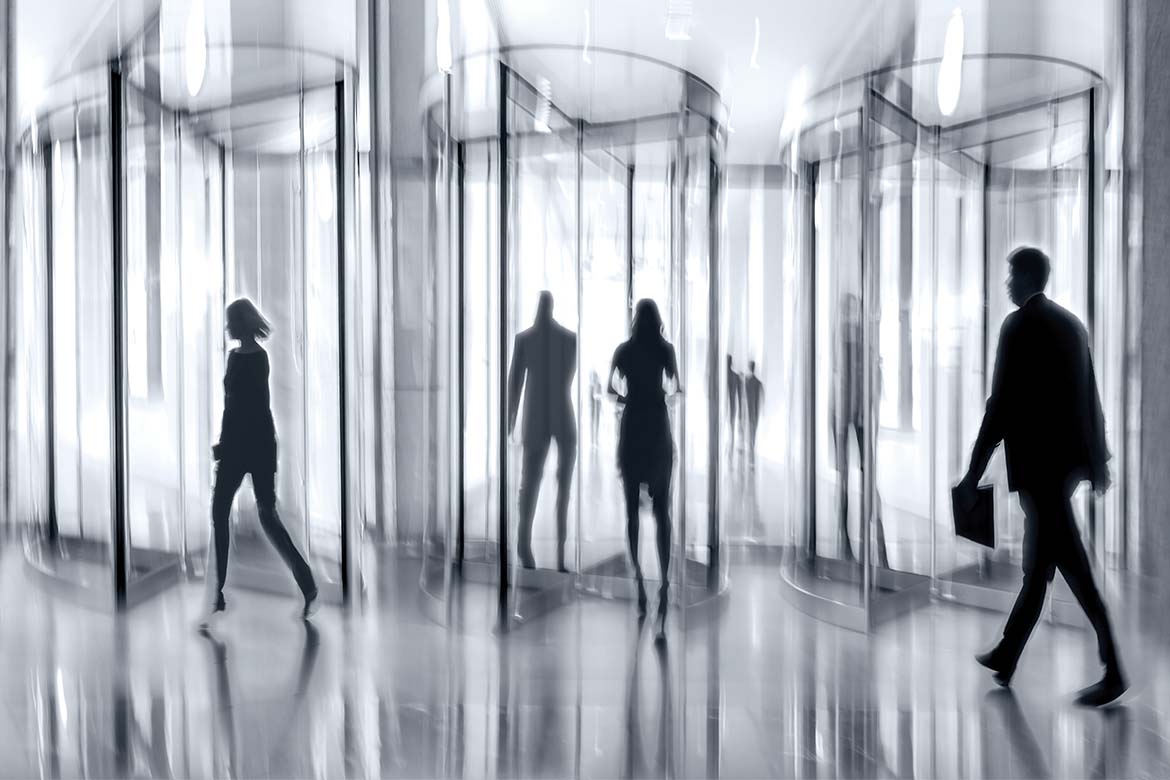 Not all security revolving doors are the same, with some requiring manual intervention to make them attack-resistant.

When specifying a security revolving door, it’s important to bear in mind that a forced attack can’t always be anticipated and therefore aesthetics shouldn’t be the only consideration, not least because not all revolving doors offer the expected resistance to attack.

The point of entrance is usually the most vulnerable part of a building when it comes to attack by criminals, protestors or terrorists.

As a result, larger premises have relied on a manned gatehouse at the perimeter and staffed reception or security team at the building entrance. However, as intruders become more willing to use force, or simply tailgate their way in by closely following the person in front, specifiers are looking for more robust ways of protecting people and assets, whilst still retaining architectural appeal.

Specifiers need to be aware that not all security revolving doors are the same. For instance, some models require manual intervention to make them attack-resistant. This is not ideal because attacks can happen quickly, with perpetrators relying on speed and surprise to force their way through a revolving door before additional physical layers of defence are manually deployed or intervention arrives.

One of the ways that you can be certain that a secure Revolving Door is able to withstand these kinds of unexpected, forced attacks is to specify one that meets LPS 1175: Issue 8 and Secured by Design (SBD). Any product that is LPS 1175 certified or is accredited by Secured by Design will also meet or exceed the requirements of Approved Document Q. Revolving Doors that are in a permanent state of attack-readiness, where no user intervention is required, avoid the risk and delay of activating a secondary layer of defence such as night security shutter.

LPS 1175: Issue 8 is an important entrance control security standard when it comes to specifying security portals and revolving doors, not least because it is now a requirement in many different sectors, including: education, finance, healthcare, manufacturing, the public sector, residential, retail and utilities.

Issue 8 of LPS 1175 is the latest version of the standard. It retains the same rigorous testing procedures as Issue 7 with the addition of several new tests to reflect a broader spectrum of threat scenarios. Important updates include changes to reflect the scope of tools now available, size of tools, access to tools, portability of tools, power and effectiveness.

The new ‘matrix’ style security ratings defined within the revised standard facilitates LPS 1175 being applied to a far wider scope of threat scenarios.

Several industry bodies are encouraging the uptake of LPS 1175; Richard Flint, LPCB’s Physical Security Certification Scheme Manager, said, “When assessing the overall level of risk, correctly specified security products are critical in protecting buildings and their users against crime. We encourage the use of LPS 1175-approved products wherever possible because it hardens premises against criminal attack. Specifiers should refer to the LPCB Red Book when looking for LPS 1175- approved physical security products. Security portals and revolving doors certified to these standards are able to resist experienced attempts by criminals at forced entry using a wide range of tools.”

He added, “LPCB’s LPS 1175 standard sets the bar in providing specifiers with confidence in specifying physical entrance security that is able to withstand forced attack. Specifying LPS 1175 products which have been independently third party tested provides confidence that the product will perform as claimed, whereas untested products may not perform as expected.”

For revolving doors to provide adequate levels of protection against criminal attack they need to achieve LPS 1175 and be in a permanent state of attack-readiness. Until relatively recently there were no revolving doors or security portals available to LPS 1175.

Historically, that meant compromises had to be made between security and aesthetics, resulting in some buildings ending up looking fortress-like with little architectural appeal or specifiers settling for a less secure façade solution in order to retain building aesthetics and requiring the expense of a secondary security rated night-barrier. However, that has now changed, with LPS 1175 approved revolving doors and security portals removing the need for multiple or secondary security barriers and also being aesthetically pleasing.