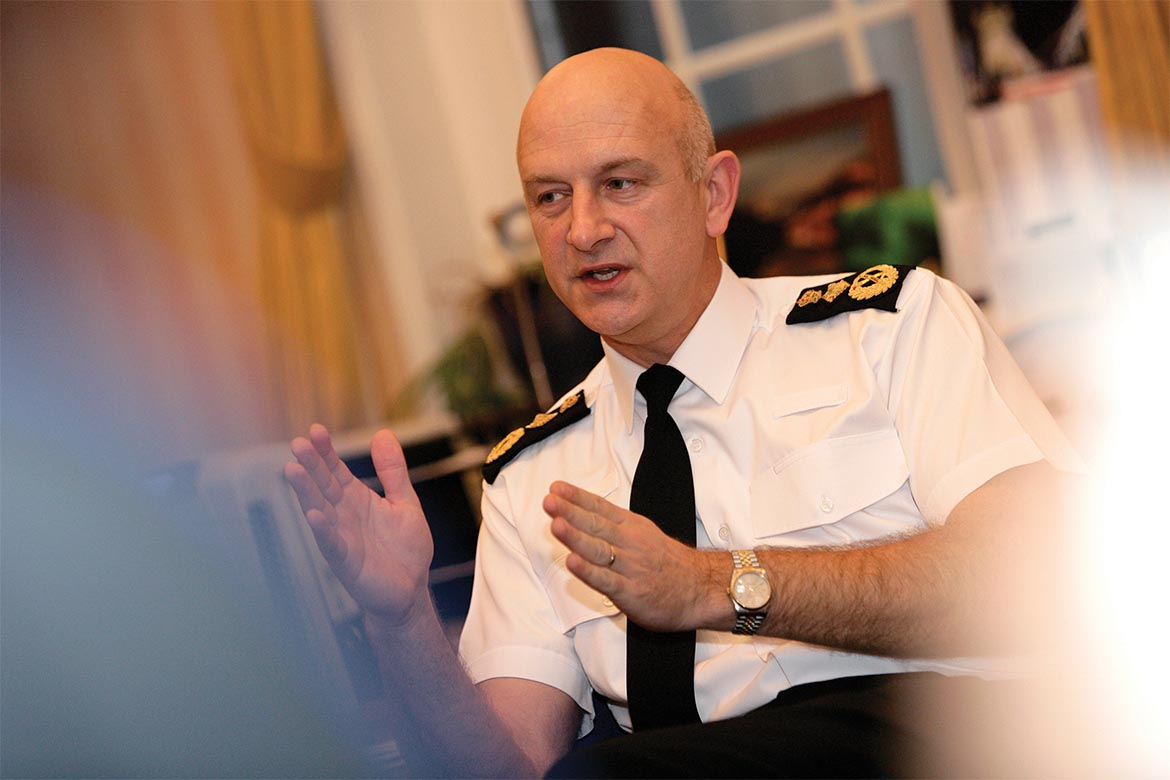 The challenges facing the City of London Police in Spring 2012

In the post of City of London Police Commissioner for just over 12 months and recently awarded the QPM, Adrian Leppard is tackling unprecedented challenges and the next 12 months are set to be equally testing.

The Commissioner’s lead role in devising a national economic crime capability, with regionally based units, is one of his highlights of the past year, “Policing needs to present a better capability for addressing this type of crime.” Chief Constables across the country are in agreement for this to move forward and funding negotiations have started with the Home Office. The City of London Police will continue to play a major role in developing this scheme.

Riding in the Lord Mayor’s Show was a different kind of highlight, “It is so unique, so different, such a massive spectacle.” It was quite a challenge for the Commissioner, not only did he learn to ride “the horse I trained on went lame – so I had to ride, a horse I had never ridden before, but the horse was really good and I thoroughly enjoyed it.”

Previously with both Kent and Surrey Police, the City of London must be quite a change, “It is obviously a much smaller force, but also funded in a very different way.” The other major difference is its national role. And it is this unique balance between modern and traditional that makes the role so special to Mr Leppard, “Cutting edge, modern policing, including economic cyber crime and protecting the traditional values of the City.”

The challenges currently facing the force are clearly linked to this year’s events. The early summer heralds the Queen’s Diamond Jubilee, closely followed by London 2012. The Commissioner sees these largely as business as usual, “These are actually normal policing events and we police lots of events in London.” Plans have been afoot for two years with a pan-London approach. The force has been working closely with British Transport Police, Ministry of Defence Police and the Metropolitan Police. “I am very comfortable with plans I have seen that we are ready – we will do a good job.” And as a keen sports person, “I am an Olympics optimist, it will be a great event for London and the country.”

Of course, the most difficult task this year is dealing with the budget. Every police force is facing a 20% cut between now and 2014 and “having to put in place a very big change programme,” the Commissioner told us. “We will do everything we can to keep officers on the ground and maintain security in the City and so will every chief constable in the country.” But it is inevitable that “there is going to be a reduction in service.” However, the outcomes are not all doom and gloom. It could present opportunities for the security industry, “It does not have to be a threat.” The Commissioner believes we are a position where “we have got to be prepared to shake the box, do things differently”. This could lead to “a much closer relationship between the police forces across the UK and the security industry.”

The Commissioner recognises that we are going though a very difficult period of austerity in this country. There is bound to be further concern around this from the public and he can anticipate there will be some form of protest. “We live in a democratic country where there is a right to protest. The challenge for the security industry and policing is to manage protest so that it is lawful and does not disrupt businesses and everyone else from getting on with their lives.”

In these difficult times, the Commissioner sees great benefit in the City of London Crime Prevention Association, “As a police officer, it is great to be able to engage straight away with the entire security industry in the City.” And the initiatives and campaigns the CPA has developed, including Griffin and Argus in particular, are “unique and phenomenal”. He is also a great supporter of partnership working,  “You need partnerships around you that work.” He thinks the campaigns of the local community safety partnership are great and points out that where partnerships work the result is “bigger than the sum of the parts”.

He is very open about his reasons for becoming a police officer “I wanted something exciting, simple as that. I loved the idea of chasing cars, riding motor bikes.”

And to relax,” I go and jump off mountains in a paraglider.”

You can see why Adrian is focussing the minds of the City of London Police. His top tips for success are simple: Focus on doing the job well and never forget the people around you. “I get frustrated if people don’t give 110%.” He is a Commissioner who wants the best people and for them to share his vision. In return he aims to create an environment where people are “excited about coming to work and know what they need to do”. All in all a recipe for success for the year ahead.