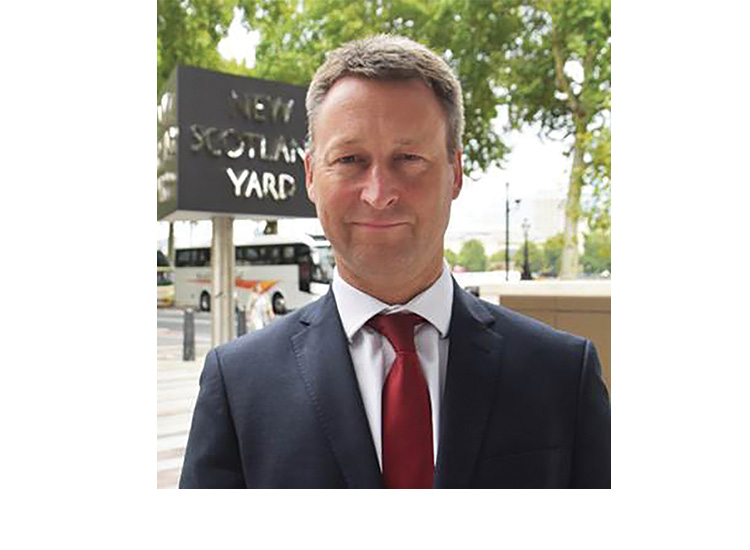 DAC Dean Haydon retired in July 2022 after 34 years in policing. Although his final role as the UK Head of Counter Terrorism involved a high degree of accountability, risk and being always on call, Dean calls it “the best job in policing”.

His role included lead operational responsibility for delivery of the counter terrorism strategy CONTEST; strategic lead for high threat and high-risk terrorist operations; and lead police advisor to government through COBR in times of crisis. During his leadership, 34 terrorist plots have been disrupted.

Dean said: “It is a huge role: you can mobilise a nationwide network of resources and assets from across the UK, from the police officers in London to those nationwide, with access to 8,000 CT officers. You can support other countries around the world with the resources available. It is a fascinating, challenging and hugely fulfilling job.”

An equivalent role does not exist in most countries. Dean says: “This role enabled me to take command and control of incidents across multiple force areas and this provided clear advantages when terrorists move across force boundaries.”

Throughout his career, counter terrorism has been his passion and Neil Basu (the previous SNC for Counter Terrorism) said: “Dean is one of, if not, the most experienced senior detectives in UK Counter Terrorism and major crime. He brings a wealth of operational and strategic wisdom to the role, which, from personal experience, I know is one of policing’s most demanding.”

Dean’s 34 years of police service have involved many of the most serious, challenging and well-known crimes and terrorist attacks in the UK and globally. For this article, this calm, resilient and popular leader reflected on some of the key moments in his career:

An early start at Hendon

Dean is the first and only police officer in his family. Thirty-four years ago, aged just 17, he arrived in London to attend Hendon as a police cadet, where he had “the best year of his life”, before becoming a police recruit a year later.

His career has spanned the length and breadth of London including his first two years at Wembley, trainee investigator in Harlesden and Kilburn, heading up the robbery and burglary team in Ealing, and roles in Lambeth and Brixton.

Dean always wanted to be a detective and has been in almost every conceivable detective role. He was a detective constable and detective sergeant for a dozen years before advancing his career.  “I wanted to secure a solid grounding and experience at these ranks before going for further promotion.”

Once he began climbing the promotion ladder, he progressed quickly, eventually reaching one of the top jobs in British policing. He says this is down to “a bit of luck, a bit of being at the right place at the right time, but also my own application and effectiveness”. Additionally, he says he always went for promotion when the timing was right for him and he had the experience and credibility to succeed.

There is a thread of counter terrorism involvement throughout Dean’s career. This began with him being the first officer on the scene at the Wembley High Street vehicle-borne bomb in May 1990 and two years later, responding to the massive car bomb at Staples Corner.

Alongside his other roles, he trained in Disaster Victim Identification and was part of the team that traced and repatriated the remains of the 67 British people killed in 9/11 – the terrorist attacks in September 2001 in the US.  He led the negotiations to bring home the remains of those who died when Malaysian Flight MH17 was shot down over Ukraine in July 2014.

Dean was appointed the Commander for SO15 (the Counter Terrorism command of the Metropolitan Police) in 2015. He maintained and led strategic oversight of the five terror attacks on the streets of the UK in 2017 in Westminster, Manchester Arena, London Bridge, Finsbury Park and Parsons Green.  “This was a watershed moment for us and marked a surge in demand on counter terrorism policing which persists today.“

Dean adds: “When an incident occurs and our counter terrorism policing response kicks in,  we see the best of people, everyone works really well together, it is a well-oiled machine and we are envy of the world for this capability.”

On 4 March 2018, he was appointed Senior National Coordinator for the UK’s Counter Terrorism Police network, coincidentally the same day as the  Salisbury attack – where Sergei Skripal and his daughter Yulia Skripal were poisoned with Novichok nerve agent.

Dean’s work has taken him all over the world, supporting the response to critical incidents and providing advice and guidance to others where he can. In recognition of this, he has won a number of international awards including the Spanish Police Medal of Honour,  the FBI Director’s Excellence Award and he was awarded the Queen’s Police Medal, presented by Her Majesty the Queen in 2018

Dean was President of LINCT – Leaders in Counter Terrorism – also known as the Five Eyes – a global network of counter terrorism leaders from Australia, Canada, New Zealand, UK, and the US. He became chair of the executive board on this retirement. And he has worked all round the world on terrorism and related projects.

Dean was Commander – Head of Homicide, Sexual Offences and Child Abuse, and worked on a number of highly difficult and sensitive long-running investigations including the murder of Stephen Lawrence, the murder of Milly Dowler by Levi Bellfield and the shooting of Mark Duggan. He was also Head of Trident, with pan-London responsibility for tackling gang violence, serious and organised crime, drugs trafficking, and shootings.

In the late nineties, Dean was asked to be part of the Ghost Squad – so called because everyone who was part it disappeared overnight from their normal roles – to investigate serious corruption across policing. The Ghost Squad has been the subject of books and in-depth newspaper articles, but at the time, it was highly secretive, involving undercover officers and working with retired military and MI5 personnel. He said: “Although it was a privilege to be asked, it was a shocking experience to uncover the levels of corruption and links to serious and organised crime.  It was uncomfortable at times investigating fellow officers, but in the end extremely satisfying to convict those involved.”

Dean’s approach to his role, career and leadership

Dean encapsulates his approach to his role and leadership into three golden rules: Firstly, work hard – Dean says: “It’s important to build a reputation based on hard work, wanting to be involved and gaining credible experience. This enables you to become resilient and knowledgeable.”

At the same time, Dean believes it’s important to have fun and enjoy what you do – his second golden rule. “Policing work involves some fascinating projects.” He is a demanding leader but wants to create teams and environment where people are happy and enjoy their work.

And, lastly, Dean’s third golden rule is to do it with humility: “Accept that things go wrong sometimes and learn from your mistakes and although you have your own expertise, you don’t know everything. Don’t hang people out to dry if they make mistakes.”

He describes his leadership style as calm, resilient, engaging and consultative, but in times of crisis, he is very comfortable stepping up into command and control mode.

He is collaborative, having regularly liaised with intelligence services, MI5 and MI6, with other forces around the country and with local and national stakeholders such as government, business, industry and local communities.

We discussed Dean’s views on the current threat from terrorism. He reflected on the most significant change being the shift away from large terror cells with deep roots, towards the self-initiated terrorist. These are individuals who move to violence alone, often inspired by what they see online. They are present across all ideologies, are unpredictable and more difficult to detect. Dean says: “Often, martyrdom is the desired outcome. They do not want to talk or negotiate.”

He went on to highlight that: “The police have over 800 live investigations running at any given time across the UK. The threat to our safety and security is very much real.”

Dean further explained that in response, and in addition to pursuing terrorists and preventing others from becoming violent extremists, the police service carries out daily activities to help increase the protection and security of our people and places.

He said: “This concerted effort, which includes highly visible, covert, armed or technical methods, is aimed at protecting the public from the threat of terrorism. It boosts the security of key sites, making the UK a hostile environment for terrorists to operate in and we can all go about our daily lives.”

The impact of COVID-19

Dean also expressed his concern about how the pandemic has created an environment in the UK in which extremists may find it easier to identify, target and potentially radicalise vulnerable people. “People were isolated during lockdown – some of the supporting organisations were unable to provide the same level of support to vulnerable people and those with mental health issues. It is important that everyone looks out for changes in family and friends, as outlined in the ACT campaign. This can be difficult, but your call will be handled sensitively and it might save lives.” (You can report in confidence at gov.uk/ACT or, in an emergency, dial 999).

Added to this has been an increase in protest and anti-government feeling and more unruly behaviour generally. All of these can fuel terrorism.”

The best job in the world

Dean Haydon’s career has included some of the most famous and infamous crimes and events from UK policing and crime from the past 34 years, most notably his role in leading the response to terrorism in the UK since 2018.

At the conclusion of our discussions, Dean said: “A lifetime career in policing is tough, challenging and not always an easy place to be with the public or politically. You do see the worst part of society, the vulnerable, death and destruction, but there are many experiences, challenges and fascinating work areas you just don’t get in other job. For me, it has been the best job in the world.”

For more profiles of senior officers in policing and across the security sector, see you category Security Career Profiles.

See our Counter Terrorism category for more information in this area, including our recent update Counter Terror Policing keeping us safe.