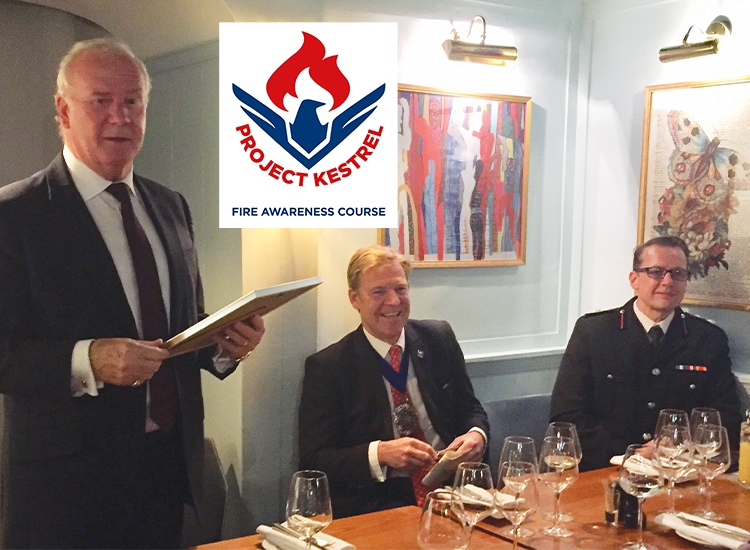 To book individual places, please use this link: https://projectkestrel.theskillsnetwork.com/

For all group bookings (more than one place) please email admin@cityoflondoncpa.org.uk

Launch of Project Kestrel in City of London

The initiative involves an online training package that enables security staff to learn all aspects of fire safety, including fire prevention and detection, awareness of local hazards and risks, whilst also gaining a better understanding of duties and responsibilities.  This will empower them to better support the blue light services in their response to any fire-related incidents, enabling both responders and those involved in emergency incidents to work effectively together.

Deputy Commissioner Mills from the LFB thanked Don Randall and the CoLCPA for driving Project Kestrel forward and Dr Tony Cash for his considerable expertise in producing the content for this training product. He said: “The culmination of many months of partnership work with the City of London Corporation, City of London Crime Prevention Association and London Fire Brigade, developed during the COVID pandemic lockdown, is testament to the energy, dedication and focus of the security sector in the City of London and our own commitment to making people, infrastructure and businesses even safer.”

Borough Commander City of London, Dave Bulbrook, added: “This project will further integrate the security sector into effective and efficient emergency response as well as fire safety protection and prevention. I think this is just the start of ever closer collaboration, integrating fire with security to improve how we serve the public.”

The Lord Mayor, William Russell, commended the partnership between the CoLCPA and the LFB, working alongside the CSC and CSSC in bringing Project Kestrel to fruition.

Don Randall thanked everyone involved for their support, energy and commitment, including Ashley Fernandes from ICTS UK & Ireland and Rajeev Pradhan from Bidvest Noonan for being the first security organisations to pledge to take a substantial number of courses for their frontline staff.

He thanked Peter Lavery, Chair of the Security Institute, who has confirmed that attendance on the programme earns 2 CPD points. Don also announced that any profits from Project Kestrel will be split between two charitable causes: The London Fire Brigade Museum and Cadets, and the CSSC.