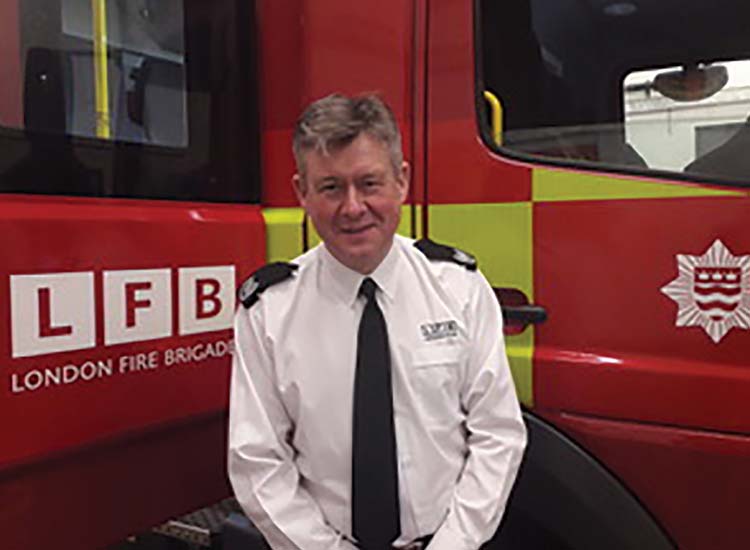 As part of our ongoing series of profiles of senior officers in the emergency services, we interviewed David Bulbrook, Borough Commander in the London Fire Brigade, to find more about his role and why he believes the fire and rescue service offers a great career.

He also gave us an insight into how the LFB are supporting the COVID-19 efforts.

Role of the Borough Commander

Each local area has a Fire and Rescue Service with the core functions around not just fire safety and firefighting, but also rescuing people from road traffic accidents and responding to other emergencies, such as flooding or terrorist incidents. In London, each borough has a Borough Commander, for the City of London this is David Bulbrook. The City is, of course, the location for the headquarters of many banks and financial institutions so is of importance both nationally and internationally. It is also an area that hosts many buildings of historical significance. David feels privileged and honoured to have this role, “the jewel in the crown” of the London Fire Brigade.

Why join the Fire Brigade?

David had a varied career path before joining the London Fire Brigade, including a stint as an actor, roles in banking and housing and working on a building site. While deciding on his next role, he saw an advertisement on London Bridge that appealed to him. “It involved a lot of areas I was interested in:  I love London, its history and its role and influence nationally and internationally and I wanted a job where I can help people. LFB brings it all together and I have it found it a genuinely honourable job: people call for help and we respond.”

David has worked across the London Fire Brigade, including early postings at Greenwich, Southwark and Erith. He became a Regulatory Enforcement Officer for some years and then moved onto the Channel Tunnel Rail Link Project. “This provided an important grounding in major incident management and planning and preparing a large organisation to mitigate incidents.”

A significant part of his career has been in transport and infrastructure, including Crossrail. He headed up the team that produced operational response documents for all major transport projects and their associated technical infrastructure, such as power supply and tunnels, including sensitive sites whose infrastructure is of particular importance. “We have people at all levels, developing plans and tactics, for major or minor incidents – anything that could befall London, we prepare and train for.”

In his last post before this one, he was Staff Officer for Commissioner Dany Cotton, for whom he has great respect and admiration. “Dany very quickly made positive changes to attitudes and culture in the London Fire Brigade.”

Role in the City of London

As well as his operational role in the City of London, David now has a National Fire Chief Council role working with HS2, operational planning and British standards for transport infrastructure. He must provide well informed answers on central policy around all transport. This includes the current work on the Thames Tideway: “This is a unique operational challenge, there is incredible engineering going on. It is a privilege to see.” He is also involved with the operational and emergency planning for Bank London Underground development. “You need people with knowledge on both sides, who understand the needs of the infrastructure and risks which must be managed reasonably and proportionately, with proper plans in place to prevent incidents where possible and mitigate when things go wrong.”

As well as the day-to-day role, David has been working to develop guidance on large public events, that will become a national guide. This includes advice on that partnership working. Much of his work is in partnership with local partners such as the City of London Corporation “linking together our resources and knowledge.”

One of David’s areas of focus is to promote the protection of historic sites in the City of London. “This is part of LFB’s London Safety Plan and recognises the importance of heritage to the nation and world and to play our part in protecting it. They are so vulnerable: they were built to look spectacular – prevent and protect is part of our operation.”

David explained how the LFB has supported the response to Covid-19:  “We have over six hundred volunteers who have stepped up and over three hundred have been used to drive ambulances and support health partners and the London Ambulance Service’s response. The LFB’s contribution has continued in the community by delivering medicines, care packages and food to vulnerable Londoners who are being shielded from COVID-19. We have helped to deliver over two million items of PPE to health workers.”

He continued: “Crews from across London have made over 17,000 facemasks to protect health professionals and we have maintained our fire and rescue cover standards across the whole of London during this time.”

Reasons to join the fire and rescue service

David wholeheartedly recommends the Fire and Rescue Service as a career for everyone.

“One of the best things about the fire brigade is that it is a melting pot: the people that you meet and work with come from every conceivable background. I have worked with firefighters who were previously captains in the British Army, a trader from the City, aircraft engineers. In fact, our first grandmother has just got through selection and training!  It is a really rewarding career that can take you to amazing places. You see some extraordinary stuff and genuinely do some good.”

Careers in the Fire Service

Everyone who joins starts as Firefighter and then has options to follow their career. There are specialisms such as regulatory, investigations, technical recue, water rescue, fire rescue. You can work your way through the ranks or continue as a professional firefighter honing your skills in search and rescue and the use of a raft of sophisticated, technical equipment. “The skill level required to use all our equipment and its complexity for all foreseeable situations is a significant undertaking.”

If you wish, you can specialise in areas such as leadership. “Junior Officers, such as Leading Firefighters, respond when incidents are at their most dynamic: information is uncertain, hazards are unknown, and it is challenging to quantify the risks people are being exposed to. This experience is useful in many roles going forward.”

David concludes, “You do have to care about people and care about London. It is a principled service, working for the community to keep them safe. It is a satisfying job, even turning out at 3am, protecting people’s lives, homes and businesses: making a bad situation better for someone.”

See the full range of articles about Careers in our Careers category in particular Profiles and Careers Advice. In addition, we feature articles on Fire Prevention.