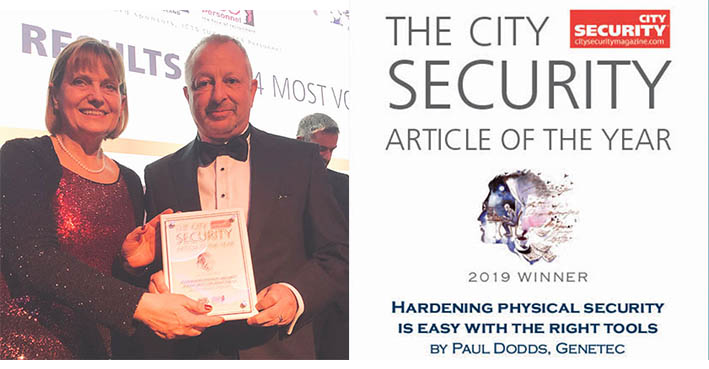 On the night, the WCoSP raised an impressive £40,000 for charity through attendance, volunteering, bidding, sponsoring, contributing items and buying raffle tickets.

The evening was great fun and a marvellous testimony to the generosity of the security industry.

The winner of the City Security magazine Article of the Year Award “Hardening physical security is easy with the right tools” by Paul Dodds of Genetec was presented by Peter French and Andrea Berkoff to David Petrook on Paul’s behalf.

Runners-up certificates were presented to: Commissioner Ian Dyson, City of London Police, Paul Rodriguez of Amulet Security and Gavin Wilson of Wilson James. A special mention to our other runners-up who were not available to collect their certificates: Javeria Malik of ActionAid International, Mike Hurst of ASIS UK Chapter,  Andrew Crowe-Spencer of Clearway Services and Richard Jenkins of NSI.

A special thank you to the sponsors of the Awards SSR Personnel and ICTS UK and Ireland.

Fundraising on the evening of the WCoSP Charity Spring Dance included a live auction, with exceptional items donated that ‘money simply can’t buy’. The ‘man with the golden tongue’ IPM Peter French, was supported by a glamorous team of board holding helpers, who all did a great job keeping the evening on track. The silent auction ramped up the fun with lots of bid action and some tactical playing exposed throughout the night. The popular raffle kept everyone involved and the chance to be a winner of some prizes that anywhere else would be auction items.

Charities that benefited included: The Magical Taxi tour and its convoy of licensed London taxis who annually take over 200 children, suffering from a range of chronic debilitating illnesses and life limiting conditions, on a three-day trip of a lifetime to Disney® Paris.

Phil Davies, Past Master of the The Worshipful Company of Hackney Carriage Drivers read a moving message from a parent that shows how supporting this amazing charity has such a positive impact on so many lives.

Another charity to benefit is the Security Benevolent Fund (SBF). This was set up by the Security Professionals to offer help for those that have been employed in the security sector. The SBF and Trustees deal with an increasing volume of requests, each meticulously reviewed to ensure your fundraising efforts are delivered where needed.

Singer Ire J serenaded the guests with his smooth tones and soul classics during dinner. And later in the evening, the Blues Brothers arrived and chaos erupted with dancing and dark shades were everywhere!  A successful evening of celebration!