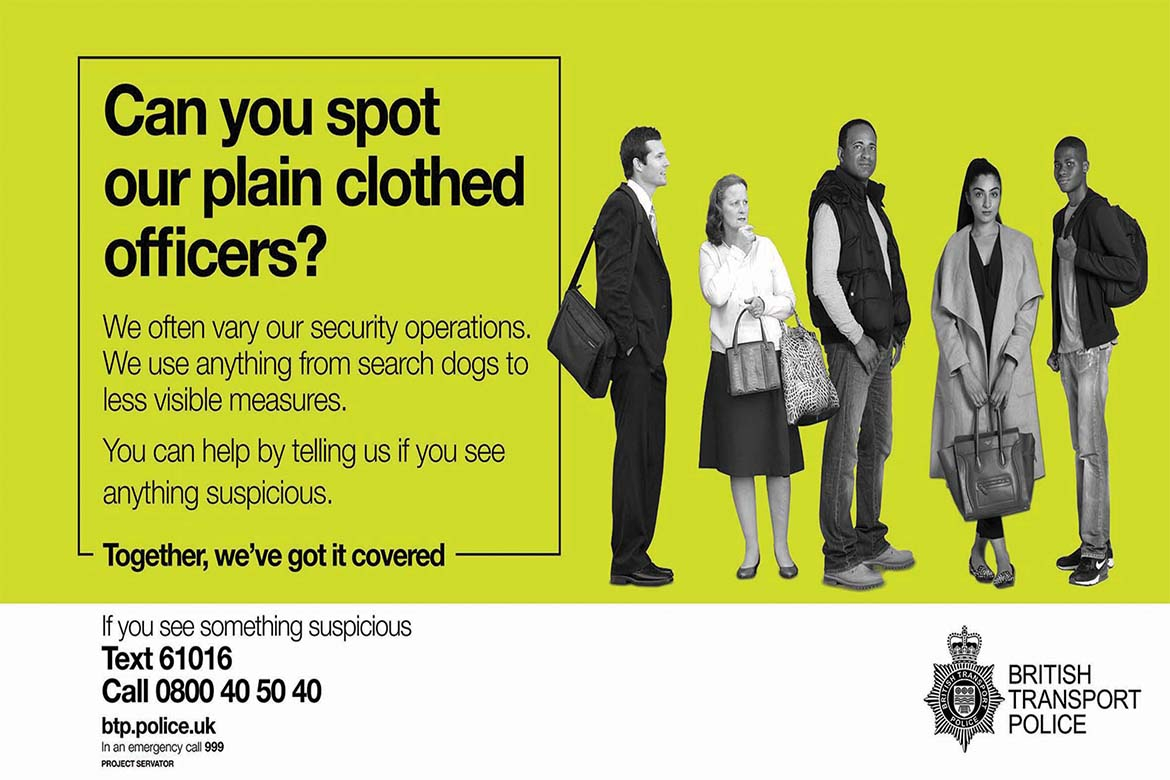 That’s the message from British Transport Police (BTP), which is using innovative tactics, labelled Project Servator, to deter, detect and disrupt crime on the rail network.

Project Servator deployments are highly visible police patrols designed to identify and prevent a range of criminal activity, from pickpocketing and theft to more serious crimes, including terrorism.

They involve both uniformed and plain-clothed officers trained to detect suspicious activity, supported by other resources, such as armed officers, police dogs, a network of CCTV cameras, and the thousands of rail and security staff and the community that BTP works alongside.

Officers work with rail and security staff and retailers based at railway stations to develop a network of vigilance. The aim is to empower them to support the police in keeping the railway safe and secure.

Temporary Assistant Chief Constable Alun Thomas said, “Working together to create a network of vigilance is the key to making Project Servator a success. Rail and security staff and people who work at stations are so crucial in the fight against crime because they are our eyes and ears on the network.

“They know their environment better than anybody, so they will know if something is out of place or doesn’t feel right.”

Rail staff and retailers also play an important role in helping to let the public know what is being done to make sure they get home safe, secure and on time every day. BTP officers carrying out Project Servator deployments also spend time talking to the travelling public. These officers inform and reassure the public about their activities and explain how they can help the police and become part of the network of vigilance, by reporting unattended items or suspicious behaviour.

Alongside this face-to-face engagement, BTP displays posters and leaflets in train stations and coffee bars and retailers at the stations, and audio announcements are made to help explain what they are doing.

The patrols were met with a positive response from members of the public who were surveyed during test deployments at Waterloo, Euston and Paddington stations in London in September 2015.

The research showed that the majority were reassured by Project Servator deployments and that they also appeared to be prepared to be part of a network of vigilance, with 64% and 66% saying they would be more likely to report unattended items and suspicious behaviour respectively.

Project Servator was first introduced by City of London Police, which adopted the collaborative community approach in early 2014, aimed at further protecting the City and reinforcing the existing “ring of steel”. It was also used during the XX Commonwealth Games in Glasgow by Police Scotland and partners in the summer of 2014, to build on and complement the Games’ safety and security plans.

BTP has worked with both forces and their partners to carry out joint deployments covering railway stations and city centres and continues to do so.

Temporary Assistant Chief Constable Alun Thomas explains what people can expect to see at stations “This could mean you see a highly visible presence of officers at your station more often.

“We will turn up unannounced to carry out patrols. They could happen at any time, last for different amounts of time and involve varying numbers of officers and resources. The key to deterring, detecting and disrupting crime on the network is making our deployments unpredictable.

“Don’t be surprised or alarmed if you see a Project Servator deployment being carried out at a station you are using. Our officers are there to keep you and the public safe.

“You can play a vital role by being vigilant when you are travelling on the network and reporting anything that doesn’t feel right – for example, an unattended item or someone acting suspiciously. Don’t leave it to someone else to report it.”

How you can help

People working in security roles in businesses operating near or around the railway can help make a real difference. As well as being vigilant and reporting anything suspicious, demonstrating a commitment to your security protocol, by ensuring sign-in processes are followed and security passes are displayed at all times for example, help to reinforce and promote a culture of vigilance around the network.

You can also help us to tell the public what Project Servator is all about. Providing information will help support our operations by reinforcing the message that the railway is not an easy target and those intent on carrying out criminal activity are not welcome, as well as also helping to address any concerns the public may have.

You can help by: