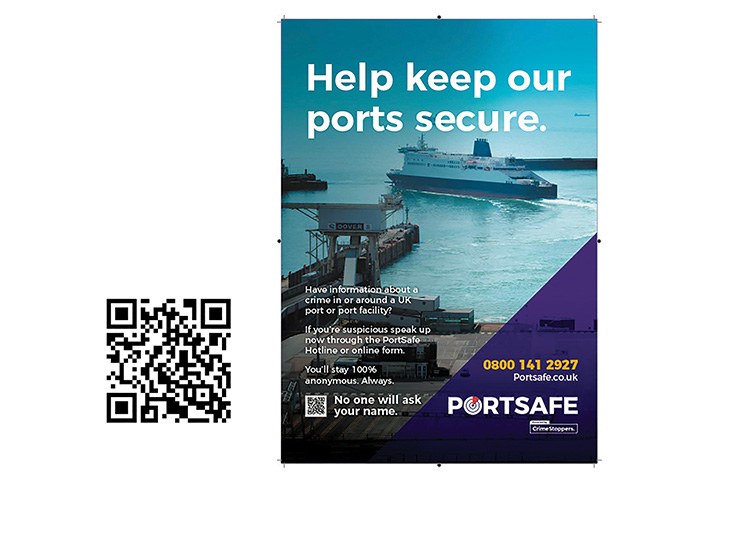 The PortSafe initiative, run by the National Counter Terrorism Security Office (NaCTSO) in partnership with Crimestoppers, Mitie Security and the Joint Maritime Security Centre, is currently being rolled out across UK ports to help reduce the impact of crime.

Responsible for moving 95 per cent of UK imports and exports of goods, UK ports are the gateway to the UK and our trading partners, handling almost 500 million tonnes of freight and contributing £23 billion in business turnover and directly employing some 118,000 people. As one of Europe’s largest industries, and due to the sheer scale of the operation, the UK ports industry is a particularly attractive target for criminals and organised crime groups (OCGs). Therefore, it is crucial that we implement methods and procedures that not only secure this infrastructure, but empower people to come forward and report suspicious activity and criminal behaviour safely and anonymously.

PortSafe is an initiative run by the National Counter Terrorism Security Office (NaCTSO) and powered by a dedicated Crimestoppers reporting line, with the purpose of providing a totally anonymous reporting line for people in port environments to report their concerns of criminal activity.

PortSafe currently has 87 members across the ten police portal regions throughout the UK.

Associated British Ports (ABP) is also actively rolling out PortSafe across all of its ports, to create a safer environment for everyone that frequents ABP’s ports. Furthermore, in partnership with NACTSO, Crimestoppers and the Joint Maritime Security Centre, we’ve helped to develop an action plan that will target focused initiatives across ten initial UK ports as a pilot.

PortSafe is the first initiative of its kind, demonstrating the power and possibilities of a working collaboration across policing and law enforcement, British ports, organisations that operate out of these facilities as port tenants (fuel companies, cargo companies, and more), and the private security sector, with the purpose of enhancing security awareness within commercial ports, and providing a safe environment for anyone to report criminal behaviour with a guaranteed 100 percent anonymity.

Four of the key focus areas for PortSafe include the ability to report varying crime types, such as insider threats (individuals that work in ports with the intention of conducting criminal activity), terrorist concerns, general criminal activity, and serious and organised crime (such as OCGs, motor vehicle theft, and cargo theft).

This NaCTSO-led initiative also drives engagement with other stakeholders, all of whom have a keen interest in reducing the impact of crime and ensuring our port facilities have the relevant support in their endeavours to combat crime at all levels. These broader stakeholders include insurance companies, regional police forces, and national police units such as NaVCIS – National Vehicle Crime Intelligence Service, in which Mitie Security is a strategic partner through its Freight Membership scheme.

ABP Ports and Humberside Police hosted an initial stakeholder meeting at Immingham Port earlier this year which has enabled further focused engagement of the initiative, targeted action development and wider stakeholder engagement across the ports environments.

PortSafe is another great example of where security organisations are able to provide a focused collaborative approach to enable the successful implementation of police-led initiatives.

For further information on PortSafe and to access the PortSafe reporting line, please use the QR code.

Further information can be requested via portsafe@hampshire.police.uk

Read articles in our Security Management category for more articles on crime prevention.