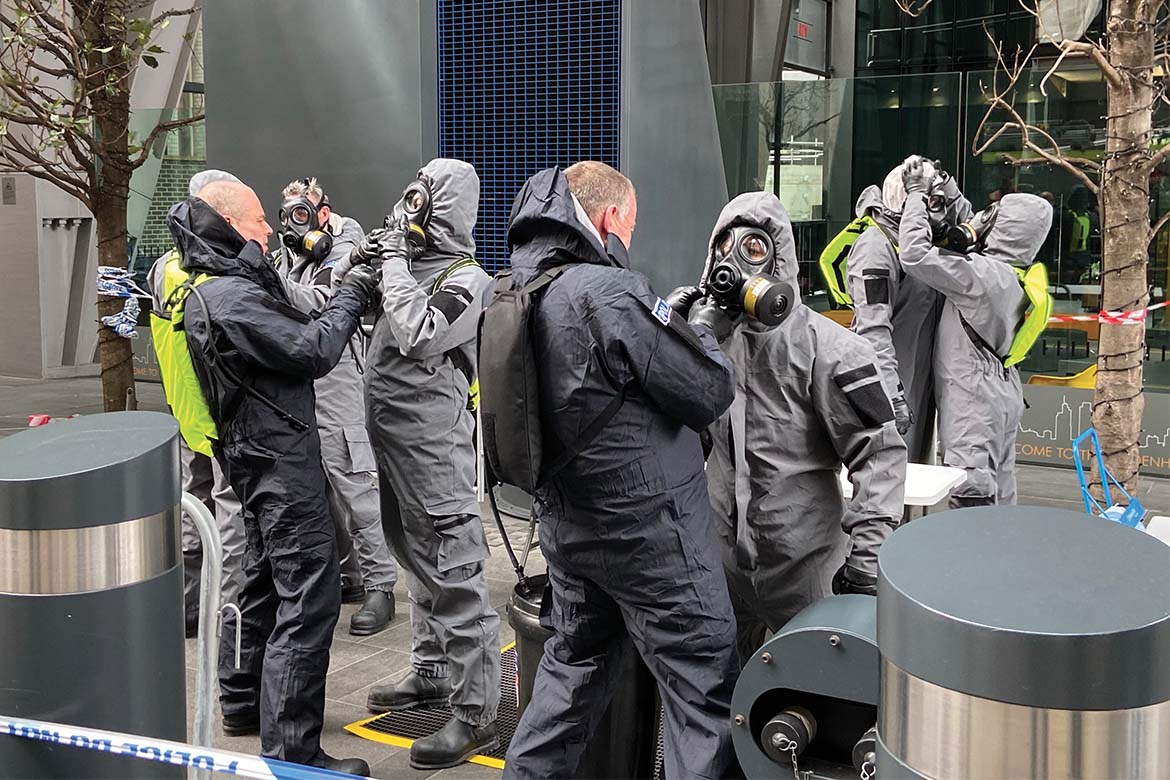 On Saturday 22 February 2020, a multi-agency exercise took place in the City of London. The aim was to practise the response from a wide-ranging number of organisations to a complex incident.

The City Security Council (CSC), a collective of security companies in the City of London, instigated the exercise that brought together the London Fire Brigade, City of London Police, London Ambulance Service and City of London Corporation.

The scenario was an unusual and complicated sequence of events. It began with a call to the emergency services about a gas leak at 30, St Mary Axe, otherwise known as the Gherkin, further complicated by a group of children visiting the building (actually City of London Police and London Fire Brigade cadets playing the role) and a large group of visitors (played by the First Aid Nursing Yeomanry). It transpired that an intruder, a disgruntled fomer employee, had invaded the building and released potentially noxious gas. The intruder escaped from the Gherkin and carried out a further attack with a corrosive substance outside the Leadenhall Building, before invading that building and then being quickly apprehended by the City of London Police.

T/Commander Dai Evans from the City of London Police commented: “This exercise in the Leadenhall Street area helped to test our shared response to a range of incidents, including a chemical substance attack, and identify any areas for development. It is absolutely vital that when major incidents happen, we are agile, coordinated and well-rehearsed in our response.  Exercises like these give us the chance to learn valuable lessons on how we can further improve our responses.”

The possible consequences of the event meant the response included twelve pumps, a Command and Control Unit, specialist fire officers, including scientific officers from the London Fire Brigade, City of London Police teams, including those responsible for responding to CBRN and Corrosive Substance incidents, and London Ambulances. The Salvation Army were in support with refreshments for all taking part. Security officers from the buildings involved were an integral part of the response, together with support from other CSC members, including representation from Allied Security, CIS Security, Corps Security, Mitie Security and Ward Security. Adrian Moore of Allied Security said: “This is interoperability at the highest level.”

With more than 200 members of the emergency services and security personnel and the high number of emergency vehicles, the scenario could have raised the alarm with passing members of the public. But a full social media plan was in place to advise people that an exercise was in progress. Plus, security officers from CSC companies surrounded the area to answer any questions and provide reassurance.

The City Security Council thanked everyone involved and Lorraine Mansfield and Jon Felix for putting it all together. David Ward, Chair of the City Security Council, said: “This has been an extremely insightful and successful exercise for all involved. The ability to test our collaborative approaches using simulated real-life scenarios is invaluable in our understanding and future preparedness to deal with major incidents.  Working alongside the emergency services has been hugely beneficial and I would like to thank everyone involved in making the training day possible, including the City of London Crime Prevention Association. We will now plan to develop further exercises to build upon this and our increasingly close working relationship across the City.”

For more information about the City Security Council and how to become a member, visit: