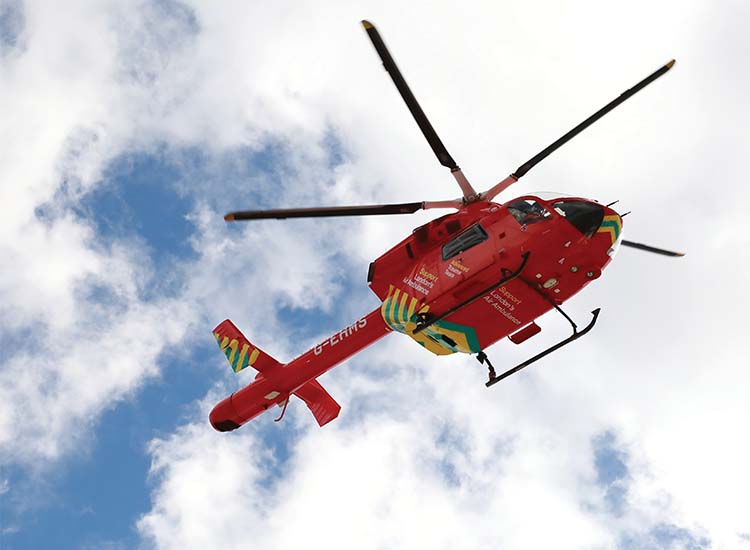 London’s Air Ambulance remains fully operational during the COVID-19 pandemic. How does this crucial service work in partnership with the security sector to save lives in the capital?

London’s Air Ambulance delivers rapid response and cutting-edge medical care to save lives in London, via helicopter or rapid response car. The team, which at all times includes an advanced trauma doctor and paramedic, perform advanced medical interventions normally only found in the hospital Emergency Department, in time- critical, life-threatening situations.

The charity was founded in 1989 and to date has treated over 40,000 critically injured people and attended most major incidents in London, including 7/7, the Grenfell Tower fire and recent London Bridge terror incident. It operates 24/7, 365 days a year, serving the 10 million people who live, work and travel within the M25. The service uses a helicopter from 08:00 to sunset and rapid response cars at night or in adverse weather conditions.

London’s Air Ambulance has been attending to the most critically injured people in the capital in need of immediate medical assistance throughout the COVID-19 pandemic. The service is also working closely with partners at the London Ambulance Service and Barts Health NHS Trust to offer assistance with the COVID-19 response, including assisting with patient transfers to the Nightingale Hospital.

Alongside the helicopter and rapid response cars, London’s Air Ambulance also operates the Physician Response Unit (PRU), a community care service that attends to patients in their own homes. The newly expanded PRU is working to relieve some of the severe pressure on the NHS, freeing up hospital beds and helping vulnerable patients avoid a trip to hospital.

Security officers are often on duty in the vicinity of the location of London’s Air Ambulance missions and are keen to assist the medical team getting to the patient as soon as possible. Security officers can assist with moving people out of the way for a safe landing, such as stopping pedestrians and vehicles from coming into a landing area. Pilots greatly value where a security officer brings something dangerous to their attention, such as a hazard in their pathway.

A quick reminder of some of the other ways the security community can help the London Air Ambulance team get to the patient quickly:

It costs around £10million each year to deliver the service, which involves considerable fundraising. CIS Security have been a corporate partner of the charity since 2014, providing support through fundraising. This included CIS Executive Chairman Carl Palmer taking part in the Clipper Round the World Yatch Race in 2017.

Carl explains his commitment to London Air Ambulance, particularly during this time: “The 2020 coronavirus pandemic has shown that superheroes walk amongst us, just like our own security professionals – they are ordinary people doing the extraordinary to safeguard our very lives. 24 hours a day, 7 days a week, doctors, medics, pilots and the whole of London’s Air Ambulance Team put their hearts and souls into saving lives.”

Carl concludes: “To say that we are honoured to support this charity would be an understatement. These superheroes represent the very best of our society and we are keen on supporting them for the years to come. THANKS to these amazing women and men!”

For more information and how you can support the London Air Ambulance, visit: