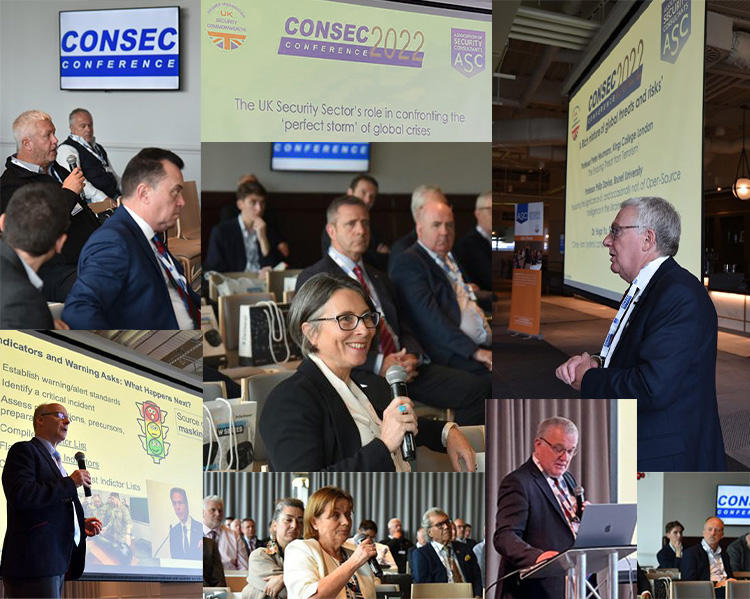 The 28th Annual Conference and Exhibition of the Association of Security Consultants – CONSEC – was held on 13 October 2022 at Twickenham Stadium with the theme: The UK security sector’s role in confronting the perfect storm of global crises.

Joe Connell, the ASC Co-chair, opened CONSEC 2022 and thanked the exhibitors and sponsors. He began the conference by saying: “At previous conferences, we have been  looking over horizon – at today’s conference, it feels like we are at the horizon.” He introduced Bill Butler LLB, CPFA, CSyP – the conference chair. Bill guided us through the day’s programme as follows.

PART 1 – A rich mixture of global threats and risks

The enduring threats from terrorism

Professor Neumann outlined the ending of the global threat from Jihadism as we understood it, and how in Europe we have now moved into the era of the lone attacker and the challenges this brings.  He explained how large Jihadist networks, outside Africa, are now rare, and in the UK this is, to an extent, credit to the successes of the Security Service Counter Terror policing. He showed statistics on how lone attackers now predominate across Europe.

Professor Neumann went on to question: how lonely are lone attackers? They are often not as isolated as media portrays them. He also emphasized the significant links with mental illness.

He summarised the emerging new challenges:

The recent influences on China/UK relations were considered, which was particularly relevant as the Chinese Communist Party 20th National Congress was taking place in October 2022 and was expected to bring major changes, including new members of the Politburo. There was a general consensus that the Congress would set economic and strategic visons, with continued tight control, assertive foreign policy and amendments to the constitution to further cement the authority of China’s President Xi Jinping.

The UK’s close allegiance with the US, its previous relationship with Hong Kong, and how the UK is now the chosen place of refuge and possible dissent for people leaving Hong Kong are likely to be irritants to the Chinese regime..

For the UK, bilateral trade continues with China a significant trading partner. The UK government and other commentators have highlighted concerns regarding cyber-crime and China’s interference campaign, but this is nothing new and has been going on for decades. China remains a vital market for UK education and now the most popular destination for Chinese students.

What this means for the UK security industry is that continued diligence is necessary on China-related procurement and supply chains. Chinese companies supplying to the West are unlikely to jeopardise their reputation, thereby losing potential revenue. But, at the same time, they are expected to support their highly centralised national government. Declining public sentiment in each country, boycotting of each other’s products and angry demonstrations are the most likely risks.

There is a view that OSINT is a game changer, but the Ukraine conflict has thrown this into sharp relief. Professor Davies described what currently constitutes OSINT, other kinds of intelligence such as indicators and warnings and ISR (intelligence, surveillance, reconnaissance).

OSINT has been around since the 19th century – but Professor Davies warned to be cautious with its use – it is open to denial and deception.  A major source is the internet, but the key emerging source is the imagery now available, via satellite and drones.

In terms of the Ukraine conflict, there were red-light warnings in November 2021, but these were not via OSINT. The imagery available has enabled checking of certain information, such as numbers of vehicles destroyed. The Russians seemed unprepared for the widely available images in some cases.

National security still holds edge with intelligence. OSINT is not a panacea. It can add to proprietary assets but is subject to significant limitations.

PART 2 – Conducting business in the face of crises

Enterprise Security: the value of security in a crisis

Paul outlined the value of security and how a strategic threat assessment is the key to its success. He explained his approach to risk assessment and development of related policies and procedures. He summarised that a successful  crisis response needs to be built on a long term strategy, a clear understanding of  threats and risks and the business context.

Andy summarised the results of the ISARR Aviation Insights half-yearly report  which concludes that aviation remains a terrorist target – airports are crowded places, with ongoing threats from organised crime, cybercrime and the insider threat.

He recommended an approach to security that incorporates people, processes, systems, and tools and to follow three key steps:

3 Learn from IT and focus on business value

A word from the sponsor

Jason was delighted that CONSEC is going from strength to strength with Dallmeier as the main sponsor since 2017. He briefly overviewed the latest in their evolution of cameras – the Domera 6000 which is used in 150 football stadiums across the world. He quoted from the Dallmeier blog: Made in Germany: a quality seal with values? and invited everyone to attend their experience centre near Bath.

PART 3 – Lessons learned and applied from the Manchester Arena Inquiry

Update on the findings of the Manchester Arena Inquiry

Paul summarised the events of 22nd May 2017 resulting in the murder of twenty-two people at the Manchester Arena and the resulting inquiry and report. He provided a summary of the Manchester Arena Inquiry, Volume 1: Security for the Arena and its eight parts, but said there is no substitute for reading the whole volume yourself.  He told the conference that Volume 2 will be published on 3rd November 2022.

On the basis of his learning from the evidence heard at the Inquiry, Paul highlighted the key actions and questions to ask about your event security:

Nick took us through the detailed planning for security for the 2022 Commonwealth Games in Birmingham, UK, the third largest sporting event in the world with 1.5 billion viewers worldwide.  He explained the additional complexity for this event due to Brexit and the Pandemic and the systematic approach they took to ensuring that all the recommendations from Volume 1 of the Manchester Arena Inquiry could be applied. He outlined the integrated security approach including the use of private contracted security .

The challenges faced in the application of lessons from the Manchester Arena Inquiry, Volume 1

Eric emphasized the need for a balanced, pragmatic response to the Protect Duty. He called for a reasonable and practical approach, encompassing three key elements: safety, security and service. There are many risks to take into account, not just the threat from terrorism, including extreme weather, drugs alcohol and crowd density. He highlighted some of the challenges faced, including staff shortages, public tolerance for a high security regime and ownership of the grey space. He also asked: do we really expect a security officer on low pay to tackle a suspected terrorist?

Superintendent Thomson discussed UK CT policing and how the new Protect Duty will enable an approach appropriate to the risks and threats of each location. He particularly encouraged the use of Protect UK app, ACT E-learning and asked that when the police circulate surveys – please respond and for business to tell us what you need.

Summarising the event, Joe Connell said: “We are pleased that CONSEC has again focussed minds on the major global and domestic issues directly and indirectly facing security in the UK today. Expert analysis and assessment by leading academic thinkers was complemented by practical and sound advice shared generously by prominent practitioners. The lessons learned directly from the Manchester Arena Inquiry were also considered in the light of their practical application in relation to the Birmingham 2022 Commonwealth Games and other international crowd management situations. This helped to steer the conversation towards the practicality of an ’All-threats, All-risks’ approach, taking account of all relevant public inquiry lessons as, regardless of any potential legislation, the lessons from such inquiries will be the yardsticks against which future security services will be measured. Finally, we were very grateful for the range of tools and resources being made available to consultants and other security professionals by NaCTSO in the best examples of public-private security collaboration”.