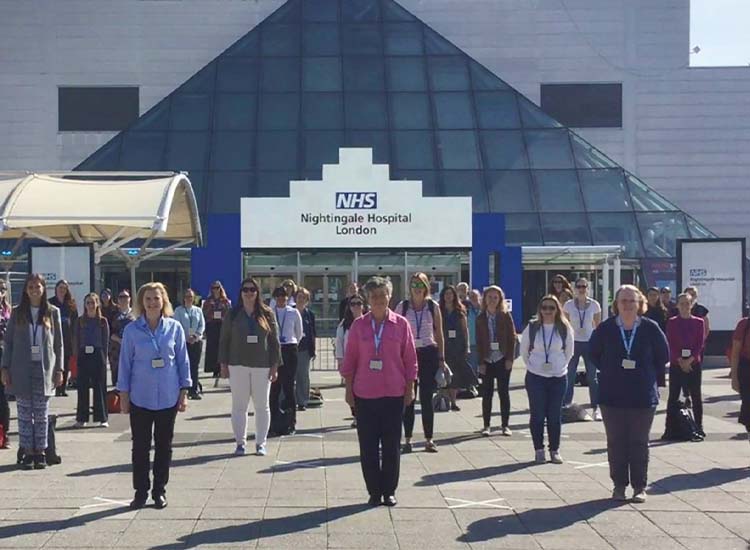 The First Aid Nursing Yeomanry (Princess Royal Volunteer Corps) [known as FANY (PRVC)] has been busy in recent weeks after being mobilised as part of the national response to COVID-19.

At the time of writing, our team of volunteers have been working shifts, providing the equivalent of 600 days’ support in just six weeks to six key projects: NHS Nightingale Hospital London, the North London and Westminster Coroners’ offices, the City of London Police, the Excess Deaths Management Group, Westminster and the National Emergencies Trust (NET) coronavirus appeal.

For those who have not heard of us before, the FANY (PRVC) is one of the longest established and most highly decorated all-female units in the UK. Originally formed in 1907, the FANY served with distinction in the First World War, assisting the British, Belgian and French Armies – including setting up the Lamarck Military Field Hospital in 1914 during the Battle of Ypres, and driving ambulances.

ln the Second World War, in addition to other roles, some 2,000 FANY served with the Special Operations Executive (SOE). Of the 50 female SOE agents who parachuted into occupied France, 39 were FANYs – including inspirational women such as Noor Inayat Khan, Odette Hallowes and Nancy Wake.

These days, members of the FANY are all trained first aiders although our role has been developing away from nursing during the past 100 years. The Corps now focuses on deploying specialist rapid response teams to support civil and military authorities at times of crisis. We train every week, all sign the Official Secrets Act and are on call 24/7 to help in times of national emergency.

Recent high-profile examples include support in the aftermath of the terrorist attack that started in Fishmongers’ Hall and went on to London Bridge last November, or indeed all the incidents in 2017. In fact, the Corps has assisted in the response to every major incident that has occurred in London (and some beyond, through mutual aid) for over 50 years.

As part of the response to COVID-19, FANYs have been involved in six projects

We have been assisting the London Pandemic Multi-Agency Response Teams (PMART) by providing daily loggist support for the City of London Police. This is one of the core skills that FANY volunteers specialise in. An essential part of crisis management, loggists support key management roles by recording information received, and when decisions were made and actions taken in real time. As readers of City Security Magazine will know, the Corps also has a long-standing role assisting the City of London Police Casualty Bureau.

In an unexpected return to our WWI role in setting up frontline hospitals, FANYs were deployed to NHS Nightingale during the setting-up phase and have been filling a number of ongoing roles. These include:

– as members of the Family Support and Liaison Team, providing invaluable patient updates to family members; and

Small groups of FANYs have also been providing daily surge support to both the North London and Westminster Coroners’ offices. Our work has provided the coroners with additional bandwidth through call handling, data management and administrative support.

Early into the crisis we also supported the National Emergencies Trust, a new charity established to distribute money at times of domestic disaster. FANYs provided remote support to their appeal tracker, fundraising, administration and communications teams.

As a global city, London can never afford to forget that it lives under constant threat from terrorism, natural disasters and unforeseen incidents – be that a rail crash or a pandemic. The FANY (PRVC) is ready to step forward to offer support in times of crisis. Inspired by the courageous women who have gone before us, it is what our volunteers are trained for. We are humbled and privileged to work with dedicated and professional teams in all the civil and military organisations we support.

Not long before going to print, the Prime Minister had just declared that the UK is ‘past the COVID-19 peak’ and we anticipate that our deployments will soon start to wind down. We are ever ready to ramp up our support again if further waves of COVID-19 occur. In the meantime, we continue a full, if ‘remote’, training calendar and look forward to celebrating, later in the year (COVID-19 permitting), the receipt of Privileged Status of City of London.

The FANY (PRVC) is a registered charity (No: 249360). Our members are volunteers and do not get paid for the work that they do. To help us continue our work – please visit our website to donate www.fany.org.uk.