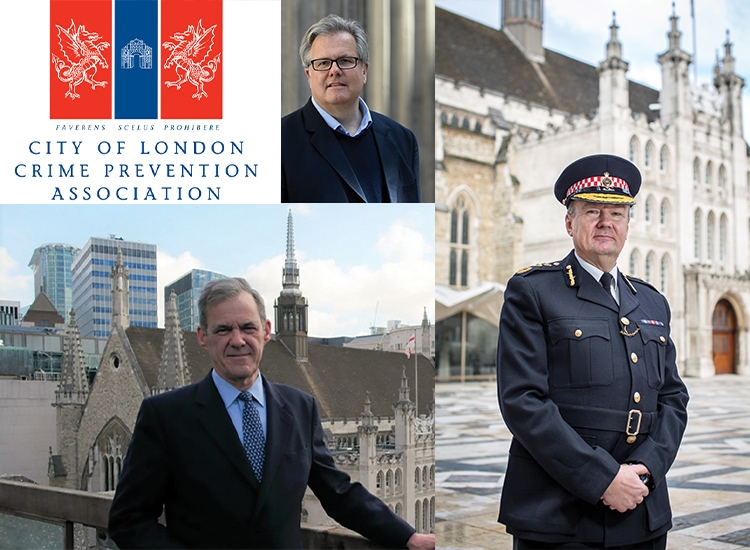 On May 14 2021, the City of London Crime Prevention Association (COLCPA) hosted its Annual General Meeting (AGM) in an online session with nearly one hundred attendees.

The AGM is normally hosted in the glorious Vintners’ Hall and we hope to be back there next year. We also hope to return to hosting our monthly meetings in the other magnificent Livery Halls later this year. At the AGM, we were privileged to have in attendance: Chair of City of London Police Authority and Patron of CoLCPA, James Thomson; Town Clerk and Chief Executive of the City of London Corporation, John Barradell OBE; and City of London Police Commissioner, Ian Dyson.

The AGM began with our Chairman Don Randall’s report on the year and the election of the Committee. This was followed by speeches from each of our eminent guests, summarised as follows:

The Commissioner highlighted the impact of the pandemic on policing this year with the inevitable decrease in violent crime linked to the night-time economy and an upsurge in online fraud – in particular, shopping, romance and investment fraud. This year has seen an increase in protest with a greater interest in the policing of protest. The Commissioner believes the force performed outstandingly, working with security staff to keep the City safe.  He noted that the City is beginning to look busier now. The City of London Police is benefitting from the national uplift programme bringing additional probationer officers into the force and the first direct entry detectives. Of significant note is that the City of London Police became the national lead force for cybercrime this year, which resulted in the creation of a new assistant commissioner role to oversee these greater responsibilities and the appointment of AC Angela McLaren.

The Town Clerk provided an insight into the role of the London Strategic Coordination group which is responsible for London’s response to COVID-19. He has witnessed first-hand the socio-economic consequences of the pandemic and worked hard with colleagues to provide appropriate support.  He thanked the members of the CoLCPA for their support to this group. Going forward, he highlighted the challenges associated with substantial numbers of workers moving to a more flexible model of working and how businesses are adapting.  He believes we will emerge better and stronger, focusing on our fundamental strengths to enhance the City’s global competitiveness and attractiveness for those who live, work and visit. This is explored further in his full article earlier in the magazine.

Chair of City of London Police Authority and Patron of CoLCPA, James Thomson

James Thomson paid tribute to the CoLCPA and its Chairman for the crucial role it plays, alongside other organisations, in keeping the Square Mile one of the safest cities in the world. He outlined the importance of the City of London Police as a specialist force for protective security and its national role in tackling economic and cybercrime: one of the key reasons that financial professional services and technology companies choose to locate in the City. He thanked the City of London Police for what they do in often very challenging circumstances and looked forward to working with the CoLCPA and other partners to achieve the Police Authority’s objectives over the coming months and years and to deliver the City’s policing plan.

The City of London Crime Prevention Association offers monthly meetings with the latest terrorism and crime updates, as well as information on other threats and risks and measures to mitigate them. If you are interested in the joining the CoLCPA, please email contact@cityoflondoncpa.org.uk.