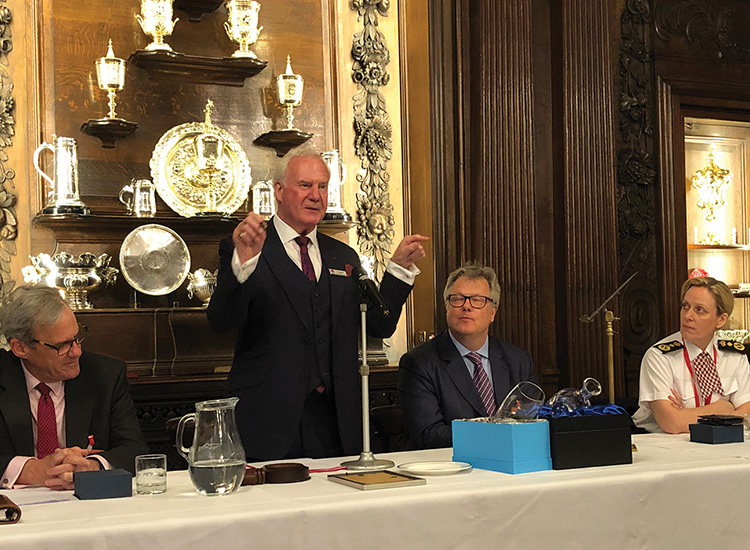 Don Randall opened the meeting by highlighting that crime prevention associations in the City go back over 30 years. He spotlighted some of the CoLCPA work of the past year, including how Project Kestrel – fire awareness training for security staff – was launched and more than 750 staff have now completed this programme. He also noted that security organisations, such as the CoLCPA, the Security Institute and the City Security Council (CSC) are continuing to develop stronger links with each other.

Don presented past Commissioner of the City of London Police, Ian Dyson QPM, with honorary membership of the CoLCPA. He also presented thank you gifts to Eugene O’Mahony for his 35 years’ service as secretary to the CoLCPA and Belinda Harding MBE for her long service as committee member.

This was followed by speeches from each of the guests, summarised below:

City of London Police Commissioner Angela McLaren explained how this year has brought a new chief officer team to the City of London and how this is an opportunity to refresh and set a way forward. She said: “Our policing style will be one of high visibility, approachable and responsive to the needs of the community.” She spoke about the work of City of London Police work in three areas:

As National Police Chiefs’ Council (NPCC) lead for business crime, the City of London Police runs the National Business Crime Centre (NBCC). The Commissioner said: “It is recognised as being a conduit of best practice and a centre of excellence supporting all businesses throughout the UK, enabling them to protect themselves from cyber, fraud and terrorism.”

Nationally the NBCC is working with the Home Office and the National Retail Crime Steering Group, chaired by the British Retail Consortium (BRC) and the Policing Minister, to deliver a range of products, including crime prevention advice.

Violence against Women and Girls (VAWG)

The Commissioner acknowledged that: “This is a very difficult period for policing. Trust, confidence, and legitimacy are very much in the spotlight and under the microscope.” In response, she has launched a dedicated Professionalism and Trust portfolio, which includes work on VAWG, alongside wider work on equality, diversity and inclusion. All VAWG offences are treated as a high priority.

The Commissioner spoke about the Safer Business Network (SBN), which has created the first formal Business Crime Reduction Partnership (BCRP) across the City, named Safer Square Mile: “It reaches over 2,000 businesses with key alerts and messages, amongst other measures.”

She also mentioned the recent Hi Vis day in the City – “working with our security partners incorporating joint mobile patrols and specialist teams” – and the recent major incident training to security staff.

John Barradell began by saying: “The City’s position as the world-leading centre of financial and professional services is founded in its reputation as a safe and secure location to do business,” and thanked the CoLCPA and other partner organisations that help keep the City a safe place.

John spoke about the City of London Corporation’s vision for the City after a period of unprecedented economic turbulence and political upheaval and the related campaigns – showcasing the City’s varied and vibrant attractions – to encourage people back to the City. He said: “We need our businesses to be welcoming back residents, workers, and visitors alike so that they can thrive.”

John welcomed the boost that the Elizabeth Line will bring to the Square Mile when it comes into operation on 24 May. He explained that the City of London Corporation is pushing ahead with its Transport Strategy and Climate Action Plan, giving examples of projects that aim to improve the experience of walking in the City and ultimately reduce casualties and improve air quality.

He moved onto to explain that the appeal of the City goes beyond the business and professional sphere. The new policy chairman Chris Hayward (the political lead in the City) has unveiled the direction for the City – Destination City – with plans to: “Revitalise our streets and reinvigorate our business, enhance the leisure offer, create a destination that is vibrant, fun, inclusive and remains anchored in the City’s unique identity.”

Chair of City of London Police Authority and Patron of CoLCPA, James Thomson

James Thomson noted that priorities of the City of London are to continue investing in policing and security, support a vibrant night-time economy that is safe for all, and cyber and economic crime.

He noted that partnership working is a cornerstone for success, highlighting, in particular, the Safer City Partnership. He thanked everyone, including CoLCPA, for the important part they play.

The City of London Crime Prevention Association offers monthly meetings with the latest terrorism and crime updates, as well as information on other threats and risks and measures to mitigate them.

If you are interested in joining the CoLCPA, please email contact@cityoflondoncpa.org.uk.