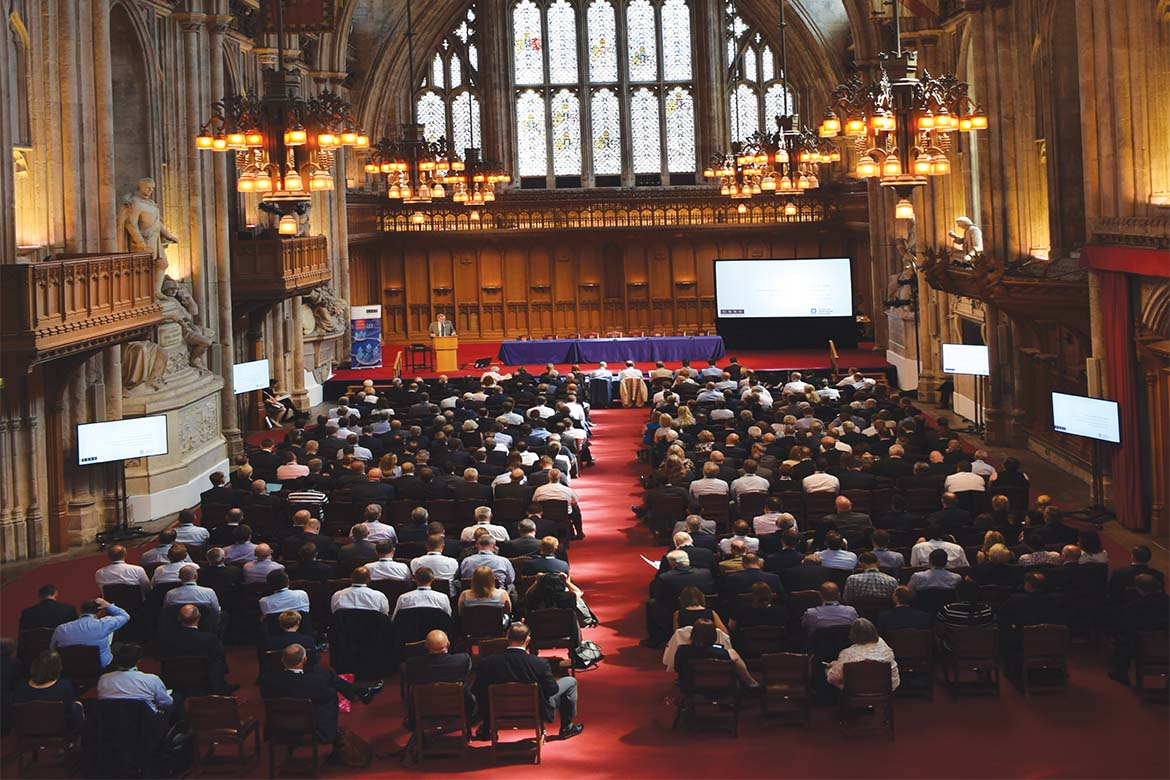 Hosted by the City of London Corporation in Guildhall and chaired by Sir David Veness, the purpose was to further develop the working relationship between police and communities and their response to all forms of incidents. Organised in just under a month, it was a testament to the event’s importance that more than 450 security professionals attended.

It was the first in a series of events, and a team of analysts and academics, led by Dr Alison Wakefield from the University of Portsmouth, was present to collate and analyse the presentations and formulate a follow-up programme, with the results and recommendations to be presented to Deputy Assistant Commissioner Specialist Operations (DACSO), Lucy D’Orsi.

The Rt Hon Ben Wallace MP, Minister of State for Security, opened the event, outlining how the four terrorist attacks since May and the high number of recently-foiled terrorist plots have brought security far higher up the agenda and how we must “keep one step ahead”. His view is that intelligence agencies and the police cannot do this alone: “We need to understand that security is not something that happens far away to someone else.” We must all take responsibility for personal safety, business safety and public space safety.

Assistant Commissioner Specialist Operations, Mark Rowley pictured left, who leads on Counter Terrorism for the National Police Chiefs’ Council in the UK (alongside Andrew Parker, Director General of MI5), explained why the event was called at such short notice.

“Since May, there have been four terrorist attacks, where 36 people have died and 200 people been injured. Additionally, five plots have been foiled. These are stark numbers. Is this is a blip or a short-term surge? The answer is clear, it is a step change.”

He went on to explain that the diversity of the threat is unprecedented, with large numbers of individuals under investigation or whom the police have concerns about.

“If we are to remain a country that is outstanding at dealing with terrorism, there must be a step change within policing, within business and crucially how we work together. We have to look afresh at our methods of tackling the threat, but we cannot do this alone.”

He outlined how resilience is critical for UK PLC: “There are 15,000 businesses in the City, a huge concentration of people. 98% are SMEs. How do we get information to these people, how do we work collaboratively with them? We need to find a different way. This is why CSSC is so important.”

John Barradell went on to highlight the importance of preparation, of exercising to identify gaps: “People get to know each other, their capacity, capability and trustworthiness.” He highlighted an example where, following the London Bridge attack, a Survivor Reception Centre was opened at a hotel in the City: “Plans prepared in advance could quickly and easily be mobilised.”

The Summit covered the nature of the challenge we face: the Westminster and London Bridge attacks were very short in duration, using simple attack methodologies to effectively create headline news. The Manchester attack showed how terrorists continue the targeting of women and children. It is clear that terrorists want to be noticed and seek high profile targets. They want to be successful, and in the case of those tasked or inspired by Al Qaida and ISIL, to kill as many people as possible and to be martyred in the process. And terrorists are learning from each other and from the recent incidents. They are working in small cells, planning low-tech plots using weapons easily available.

The Summit also covered the security advice and guidelines available already. In particular, the impressive range of security information on the CPNI and NACTSO websites www.cpni.gov.uk and www.gov.uk/government/organisations/national-counter-terrorism-security-office

The CPNI session graphically showed physical security countermeasures that can be adopted against both traditional and evolving terrorist threats, thus mitigating the effects of blast, ballistics, marauding attacks, and vehicle-borne threats (VBIEDs and Vehicles as Weapons). Further information is available at www.cpni.gov.uk/physical-security

The CPNI Personnel & People Security session showed that whilst the threat is dynamic and more difficult to detect and disrupt, there are still some fundamental, simple, low-cost ways that organisations can use to help deny terrorists information and safe operating spaces, detect and deter them and thus disrupt their ability to mount successful attacks. This is about using an organisation’s existing resources – corporate communications and, especially, people –  more effectively to disrupt attack planning and minimise impact of an attack. Much of the advice and guidance is readily available www.cpni.gov.uk/personnel-and-people-security and just needs organisations to be implementing within their sites and personnel.

All attendees were given a copy of the CPNI Passport to Good Security, a best practice guide for senior executives to help create an effective risk management strategy. It is also available on their website: www.cpni.gov.uk/leadership-security

Cautionary advice was given about security-mindedness when using Building Information Modelling (BIM), which brings tremendous capability to building and security planning, but also requires careful measures in its use, such as who has access and what information is included. Further information is available from the CPNI website: www.cpni.gov.uk/digital-built-assets-and-environments

Representatives from the private sector contributed to the event with a range of presentations from those working across the security sector.

Firstly, Matt Maer, Director Group Security at Canary Wharf, discussed how the public and private sectors work in partnership, outlining where this currently works well and making suggestions for improvements.

He put forward some easy wins for occasions when the private sector can help: “If you are making road closures or there are areas to avoid, tell us and we can tell our staff.” He gave the further examples of emergency accommodation requirements or the urgent need for blood supplies, both areas where private business can quickly mobilise to provide support.

He was supportive of the professional advice provided by CPNI and NACTSO and the simple mass messaging, such as the Run, Hide, Tell advice for tourists recently released by Counter Terror Police UK: www.youtube.com/watch?v=f_VrwYJawxc

An area where he called for improvement was post-incident information analysis, saying, “the private sector needs as much information as you can get to us”, although he recognised that in the early stages of large, complex and rapidly developing incidents, certainty of information and focus of attention meant that emergency services were unlikely to communicate with business, and recommended the monitoring of reputable news sources to provide situational awareness.

Melvin Benn from Live Nation described the challenges for the entertainment industry, explaining how they take security very seriously. They have recently completed a full review of counter terrorism plans and are producing both strategic and tactical plans. He discussed the challenges of securing festivals and areas where improvements could be made.

Don Randall, MBE, provided an update on CSSC. Don told the audience that CSSC can get fast-time, accurate and authorative information to millions of people in 20 minutes. Since its inception it has been supported by the private sector to the tune of £750k.

Supt. David Roney, Deputy National Coordinator, Protect & Prepare, described how the initiative is being rolled out across the UK (fully detailed in his later article in this magazine).

A panel session chaired by Sir David Veness and including DACSO Lucy D’Orsi; Mandy Haeburn-Little, CEO Scottish Resilience Centre; Ed Butler, Head of Risk Analysis Pool Reinsurance; Richard Horne, Cyber Security Partner PWC; and Carolyn Dunlop Chair of CPIE, discussed specific risks and responses. These included: the existing partnerships between police and industry that supported collaborative delivery, the potential terrorist exploitation of the internet and the possibility of a combined physical and cyber attack, the role of insurance in resilience, and the goodwill and need to share information, good practice and training.

DACSO Lucy D’Orsi was the final speaker with a call for greater partnership and “to dare to share”. She outlined how the recent incidents represent a game changer in the threat landscape and that existing collaboration and engagement needs to be extended. She shared examples of where the private sector can support the police, such as greater protective security measures, countering the insider threat and the visible security and customer service staff already in place at crowded places. She reiterated the availability of excellent advice from CPNI and NACTSO. She closed by emphasising these improvements are achievable but “the clock is ticking”.