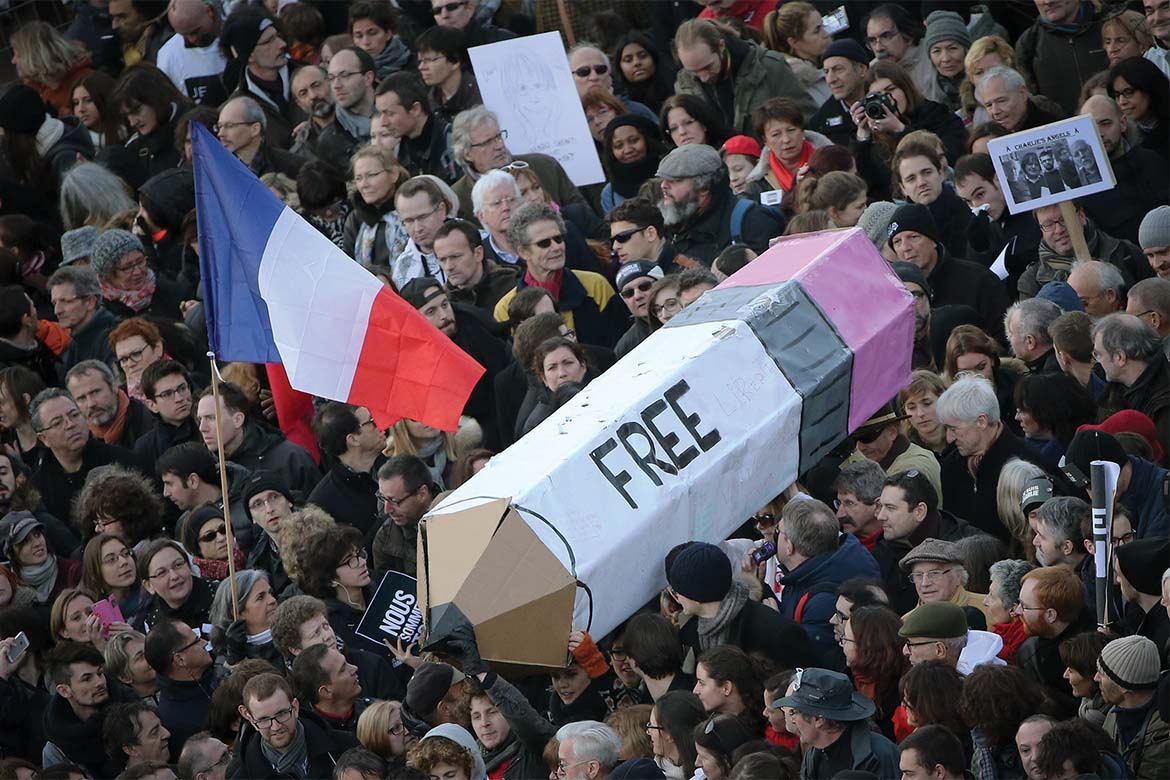 Without being too blasé, the attack in Paris in January was more than a murderous attack, it was an attack on freedom and an attack on democracy.

Whether we agreed with, liked or detested the Charlie Hebdo publications, the mere fact that they were able to publish controversial material represented freedom, and it is that freedom that was so widely supported across communities, countries and even battle lines. Freedom of expression is not just limited to the written word, it extends to being able to choose what to wear, what to say, how to say it, what to read, watch, eat and drink. It symbolises ‘freedom’ in its truest sense and is enshrined in the European Convention on Human Rights for a very good reason, it is at the heart of democracy.

Not only did this attack represent an attack on freedom, it also represented the new breed of terrorist, the insular group or lone actor. The attack involved the use of high powered munitions including assault rifles, explosives and, reportedly, a rocket launcher. Details of the attacks are still emerging, but what is now believed to have been a coordinated attack has resulted in police and military sharing responsibility for policing the streets of Paris and Brussels, with an increased armed presence on the streets of the UK.

Mobilising military resources to police the streets might be seen as a ‘show of force’ but are there underlying concerns? The role of intelligence and security agencies is to identify threats and prevent them from occurring; however, the deployment of troops on the streets would not ordinarily be considered a proactive measure. It may be that they are there to provide reassurance to the public following such a surprise attack, but it may be that it is because lone actor or insular groups are hard to identify, hard to monitor, and nigh on impossible to stop.

Media reports referred to the attacks as representing a ‘new’ threat from terrorism, but what is new about marauding attacks? These types of attacks are being seen on a regular basis in Nigeria and the attack in Mumbai is never far from our minds. So, whilst the attack style, or vector, is one that is known and has been planned for, the reason that this might rightly be considered a ‘new’ threat is that it seems to have become much easier to align with a terrorism group. When we consider joining any type of group, we think of introductions, initiations, admittance, training, etc. but it appears as though the current landscape is such that any disengaged person can attach themselves to an organisation such as Al Qaeda, ISIL, without any formal procedure. And it is this that presents some real issues for the security services, as there is no opportunity to identify when a person has ‘joined’ the cause.

It is accepted that purchasing high powered weapons and planning a co-ordinated attack will expose the actor(s) to the risk of identification; however, kept low key, lone actor or insular groups can plan and carry out attacks with maximum impact and minimal risk – and that is a very real concern. There are many online resources for ‘bedroom’ training, some of which will be being monitored, some not. Armed only with time, would be attackers can learn many skills that can be put to horrific use on the streets and, as the disengagement process continues, the likelihood of them carrying out an attack increases. This, some might argue, is the real challenge and also the only real solution.

Disengagement from society is sometimes seen as the catalyst for the radicalisation process. A search for acceptance, or a sense of community, can sometimes lead into the arms of a radical who will be only too happy to offer support, guidance and friendship. This can be where the radicalisation process starts and by the end, the actor may choose to fight abroad, become a recruiter themselves, or begin to plan an attack. But radicalisation does not need or rely on a grooming process. Sections of society are being made to feel disadvantaged, persecuted and angered without the need for a ‘groomer’. Some extreme far right groups  serve that purpose fairly well, so do older generations who feel disadvantaged as a result of immigration. Attacks, like that in Paris, serve to bridge some communities, but also served to increase the divide between others, owing to the support for the Charlie Hebdo satirical depiction of the Prophet Mohammad.

Networking sites and the media alike were calling for businesses, building owners and security groups to do more to protect against the threat of terrorism, but the question would be ‘what?’ We can make buildings more resilient to blast, we can protect stand-off distances and screen incoming packages to reduce the risk of explosion within the building. We can introduce measures to reduce the ability of a marauding attacker to gain access to a building, and increase the coverage provided to the police and security services in the event that an attack does take place, but this all costs and is hard to justify when resources are tight. The Government could consider offering financial incentives to increase security which would help justify upgrades at a business level; however, with a reduction being seen in the number of Counter Terrorism Security Advisors nationally, unless expert advice is sought, solutions may be disproportionate or ineffective.

The thing is, counter-terrorism is not a quick win strategy. Terrorism is here to stay for years and decades to come. It is extremely important to make our buildings and public spaces more resilient to crime generally, which will serve to mitigate the risk of terrorism; however, to have a meaningful effect on countering terrorism, more needs to be done to focus on community engagement, education, integration and protection. Extreme far right groups represent a real risk to community integration and only serve to increase disengagement and provide fuel for the propaganda machines that seek to persuade vulnerable people to engage in terrorist acts. Older generations, thinking that they are being negatively impacted by immigration, also represent a risk to engagement and integration and more needs to be done to justify, inter alia, housing decisions in an transparent way to reduce the negativity towards those who are perceived to be getting a ‘better deal’ because of their immigration status.

‘Holistic’ is a buzz word in security circles and never is a holistic approach more needed than in terms of counter-terrorism, but this is a two way process. As a security engineer, it is essential to understand how a threat will manifest itself against a particular target in order to design a solution that mitigates against that risk; however, without more up-to-date and accurate information it is difficult to fully understand the nature of the threat(s) faced. Strategies, processes and procedures need to be agreed at a local, regional, and national level between businesses and protective services to ensure an effective and co-ordinated response so as to ensure that the impact of a marauding attack is limited.

Head of Security Engineering, BB7 and a member of the Security Institute