The siege of Mecca: origin of contemporary terrorism 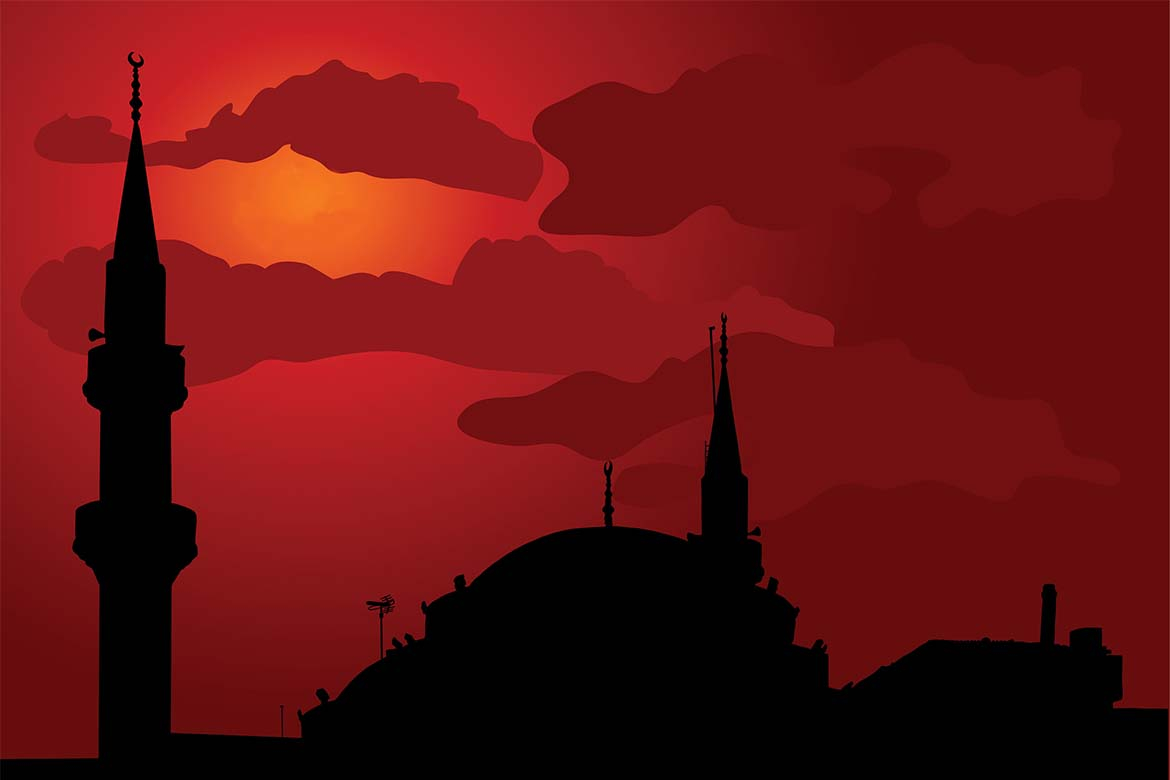 The origin of contemporary terrorism?

Contemporary acts of terrorism may take many forms. The phenomenon has transmogrified over the past 40 years from aircraft hijacks through to suicide bombing and now remotely detonated vehicle borne improvised explosive devices (IEDs). Terror tactics are even now developing. It is likely that the frequency of attacks may increase in the future but that these may be of a less complex or less sophisticated nature. There again, perhaps cavity bombers, swarm attacks and cyber threats may represent the next iterations of the terrorist armoury as we approach the next decade of the 21st century.

On Tuesday, 20th November 1979, the focus of the World’s media and diplomatic attention was very firmly centred upon the situation in Iran where the Tehran US Embassy hostage situation was about to enter its third week.

On that same morning, however, an event, arguably of even greater significance, took place in the holiest of all Islamic shrines, namely in the Grand Mosque in the city of Mecca, where the annual Hajj pilgrimage had just come to an end.

The date and timing of the event was even more significant as November 1979 was not only the start of the new year but also the new century of 1400 in the Islamic calendar.

This article will describe the events which began that day. The siege which took place during the following two weeks, and the bloodshed and carnage which followed as the situation was resolved, influenced the thinking of many, including one young man by the name of Osama Bin Laden.

Osama’s thinking had already been influenced by the teaching of the fundamentalist Muslim Brotherhood, which had been welcomed into Saudi by the King following their rebellious efforts in Egypt. The siege was the first ever large scale significant jihadist action and saw the lighting of a fuse which ultimately resulted in the 9/11 atrocity and other terror attacks in Europe. It could thus be said to have ultimately spawned the invasions of Iraq and Afghanistan where so many lives have now been lost.

Perhaps as many as 100,000 of the million or so pilgrims who had conducted their Hajj visit that year remained in Mecca after the end of the official pilgrimage period. These pilgrims wished to see in the New Year and indeed the new century.

As morning prayers began at the Grand Mosque at around 6 am it was noticed that some groups of pilgrims were carrying coffins. There was nothing unusual in this respect – many sought the blessings of the Imam for their dead relatives at this most holy of Islamic sites. What was not understood at the time was that these coffins in fact contained a variety of weapons, grenades and ammunition supplies which would fuel the bloody siege about to begin.

This was a terror event aimed at launching the jihad or holy war against the Saudi state. It was staged in response to Saudi governmental acceptance of Western, predominantly American, infidels who were being allowed into the Kingdom in response to the discovery of 25% of the world’s oil reserves sitting below the Saudi desert.

The nominal excuse given for the siege was in fact quite bizarre. It was widely believed that the Mahdi, the saviour and redeemer, would at some time return to earth on God’s orders to lead the Muslim world in triumph. The leader of this uprising, Juhayman al Uteybi was a 43-year-old ultraconservative Bedouin and a retired corporal in the National Guard who took violent objection to the western presence and preached venomously against the government.

Juhayman was known as a troublemaker by the religious authorities and intelligence services but they failed to act until it was too late despite having had him arrested, questioned but subsequently released. Juhayman used the prophesy of the return to earth of the Mahdi as the catalyst for his assault but the links were tenuous in the extreme.

A young student in Juhayman’s circle of followers named Mohammed Abdullah al Qahtani was born in a settlement in Asir from where many of the 9/11 hijackers originated. Al Qahtani wrote poetry, he was pale skinned, had a red mark on his head and held the same name as the Prophet. He also had reason to hate the Saudi state after having had his fingernails pulled out by the police when he was falsely arrested for a theft he did not commit whilst working in a hospital. Some of Juhayman’s group, now hundreds strong, suggested that al Qahtani resembled the Mahdi in name and looks.

Many followers claimed to have had strange dreams and to have seen al Qahtani standing proudly in the Grand Mosque worshipped by thousands as being the saviour sent by God Himself.

Meanwhile, they began to improve their shooting and combat skills as they prepared for a showdown with the Saudi State using weapons and bullets purloined by Juhayman from the National Guard armouries.

Just as prayers were finishing on the morning of 20th November, the rebels opened their coffins and produced their weapons. Shots were fired – a grave and unprecedented sacrilege in the confines of the Grand Mosque. Militants armed with handguns and rifles appeared amongst the crowd. Two security police officers who tried to intervene were rapidly despatched and the siege was underway – the first of many lives had been lost. Al Qahtani’s father was accidentally shot dead by a ricocheting round. The gates to the Mosque had been locked and chained and the thousands of peace-loving pilgrims realised that they were now captives in an unfolding nightmare. Rebel snipers had taken up positions in the seven minarets located around the site giving them unprecedented fields of fire to quickly dominate the ground both inside and around the perimeter. They held a strong and almost impregnable position and had all the advantages of the defence. Speeches were made proclaiming the Saudi government illegitimate and al Qahtani was proclaimed as the God-sent saviour. Some of the pilgrims even believed what was announced. Others tried to flee in panic.

The Mecca police eventually arrived at the scene at around 8 am, some two hours after the shooting began. The single patrol vehicle was greeted by a hail of bullets, losing one officer immediately. A second larger patrol arrived an hour later and this expedition resulted in 8 fatalities and 36 wounded within seconds. The rebels had by this time begun to release the majority of the hostages – it took a whole day for them all to file out to freedom. The Imam of the Grand Mosque himself slipped out in disguise and raised the alarm by telephoning the Saudi King directly in Riyadh. A few hundred others, mainly Saudis, were held captive.

Police and military reinforcements began to arrive and a command post was established in a nearby hotel. Two senior Princes, namely Sultan and Nayef, took charge of the operation. A total communications blackout was imposed and no overseas calls could be made out of the Kingdom. The US immediately despatched two aircraft-carrier battle groups to the region. The rebels meanwhile hardened their position in the basement level galleries of the Mosque where food supplies had already been hidden. A wave of shock ran through the Muslim world. Iran added to the confusion by blaming the USA and Israel for the siege. The American embassy in Pakistan was attacked and set on fire trapping 137 staff in the basement who nearly perished.

The first real attempt to relieve the siege took place on the Wednesday night with artillery shelling and a ground assault by Special Security Forces led by Major Suleyman al Shaaman. His 30-man unit took a number of early casualties and when he was shot dead the assault fell flat after a few minutes and many soldiers were lost.

The next assault was spearheaded by the Saudi Army’s 6th Parachute Battalion from Tabuk, led by Colonel Homaid. The Colonel died in the first wave of the daylight attack on the Thursday and the operation turned into a massacre. The Interior Ministry declared that control had been regained. However, when the traditional Friday prayers broadcast from Mecca did not appear, the world knew this to be a lie.

The third assault was based on the Abdelaziz Armoured Brigade led by General Dhaheri, mounted in armoured personnel carriers packing TOW anti-tank missiles and heavy cannons and supported by F-5 fighter-bombers. The battle raged over Saturday and Sunday and the new Mahdi died in the firefight. The surface area of the Mosque was eventually recaptured after heavy fighting. But the rebels simply went firm in the labyrinthine basement-level galleries known as the Qaboo network, knuckled down and the battle was far from won.

The Saudi military had by now taken substantial casualties and sought assistance from overseas. Commando groups were put on standby across the region including from Pakistan, Jordan and Morocco. Eventually a small French team from the GIGN counter-terrorist group was sent to Mecca. The team asked for a host of additional equipment including CB gas and this was delivered by air from France on 3rd December. Saudi troops using French equipment and tactics drilled into the basements and a fierce battle ensued.  The rebels fought hard but the stunning effect of the gas won the day. Two weeks after it began, the siege was finally over.

The Saudi authorities paraded the surviving rebels on state television and claimed relatively low casualties had been taken by the military. The official government figures quoted a death toll of 270. The French and other allies on the scene reported well over 1,000 had died and possibly many, many more. Following the debacle, much of the Saudi military hierarchy was removed and replaced.

In summary, this event was the first real jihadist incident and its location at the holiest shrine of a major global religion added extra significance. Its ramifications had a major effect on the Saudi people and leadership. The siege is not widely discussed in the Kingdom even today. The Bin Laden group were closely involved in construction work at the Mosque and Osama himself soon found himself in Afghanistan working for Saudi intelligence. One can only speculate as to the ramifications were such a siege to take place today with modern communications, social media and 24 hour news coverage. The global effects do not bear contemplation. For those wishing to know more about the incident, I can strongly recommend an excellent book entitled ‘The Siege of Mecca’ by Wall Street Times journalist Yaroslav Trifimov, published by Anchor Books. In addition, a visit to the website www.randomhouse.com to view a unique and fascinating set of declassified reports, signals and documents from pilots in the air and diplomats on the ground during the events reported. My interest in the incident comes from a visit to Riyadh when I met the very officer who masterminded the engineering efforts required to deliver the gas into the Qaboo and allow the assault teams to enter. He showed me the very plans and maps used for the assault.

Consultant Director at House of Consultants