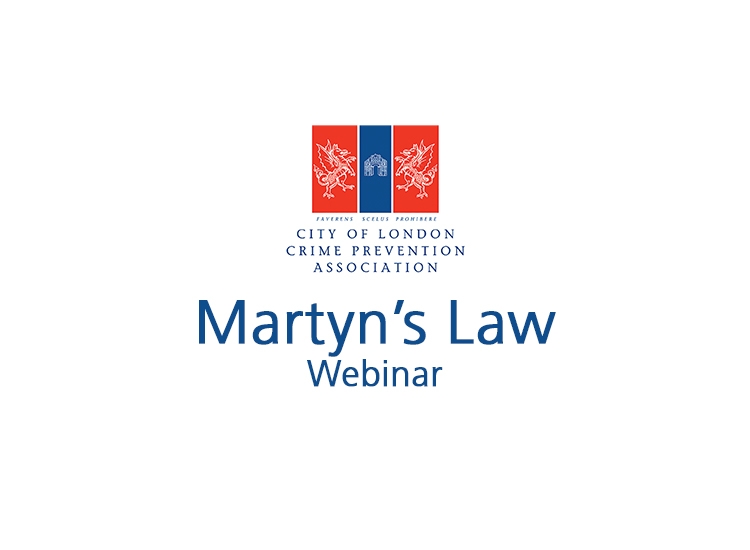 The consultation on the Protect Duty (Martyn’s Law) closed in the summer. It is predicted that this legislation will make it a legal requirement for venue operators to consider the risk of a terrorist attack and take steps to protect the public.

Given these imminent important changes, the City of London Crime Prevention Association (CoLCPA) recently held a webinar, hosted by Chairman Don Randall MBE, on what businesses can expect from the new Protect Duty (Martyn’s Law). The webinar was introduced by Figen Murray who spoke about the legacy she is creating in her son Martyn’s memory. She was followed by City of London Police Commissioner Ian Dyson with his insights and views, and two speakers on Emergency Trauma Packs.

Figen is now committed to her mission of promoting peace, kindness and tolerance in Martyn’s memory, while also working towards tangible changes that can help ensure no other family has to go through what hers did.

Figen commits her time to talking to young people in schools, colleges and universities, educating them about the dangers of radicalisation, and she is also the force behind Martyn’s Law.

At the webinar, Figen spoke about the tragic night when she lost Martyn: Martyn was 29 when he died. “On the night it happened, my daughter woke me saying that Martyn and his friends had been at a concert and an incident had happened. His friends managed to get out but as they tried to contact Martyn, they could not get any replies from him.”

Figen continued: “At around 11.15, I just knew he was dead – it was as if the connection had gone. His death was confirmed 24 hours later.” A week after the attack, she went to identify Martyn and is eternally grateful that this was done in a room set up similarly to a private hospital room and she was allowed to touch and hug him. A week later, she visited the exact spot where he died; a candle and rose had been placed there.

These were the worst two days of her life.

A year on, Figen went to a local theatre, believing security would be sorted. She was shocked when there were no checks whatsoever. This was the catalyst for beginning the campaign for Martyn’s Law. She acknowledges she couldn’t have done it without Brendan Cox (husband of the late Jo Cox and campaigner and activist focussed on counter terrorism and community cohesion) and Nick Aldworth, the former Detective Chief Superintendent of Counter Terror Policing.

Figen is delighted with the response to the public consultation and the huge number of responses and is aware the resulting analysis will take a few months.

She believes this moment provides an enormous opportunity to professionalise the security sector: make it attractive as a career with a good career path if done properly. She welcomes the recent changes to SIA licensing, which include first aid training, and recognises that it will take some years for all the changes she believes are needed.

Figen is currently in the process of studying for a Masters in Counter Terrorism. As part of her dissertation, she has interviewed a number of people. Her proposition is that people attending events would, for example, be prepared to spend an extra 50p for security – everyone she has interviewed has agreed.

Figen also discussed bleed control kits – which can be used in the first few minutes of serious bleeding when emergency services may not be there, and security officers may be the first on the scene. “I believe there is a strong case for these kits to be everywhere. Bleeding out could be reduced. I have one in my car. I might be first on scene at a road traffic accident, a stabbing or a shooting. They don’t expire and are a good investment.  Of course, there is a big debate about tourniquets and whether a lay person should apply these. But most people would agree with the notion: ‘doing nothing is not an option’, and may attempt to save people.”

The Commissioner began by saying: “We owe it to Martyn and all the others killed in terrorist attacks to get this right. My organisation does everything it can to prevent deaths from terrorism.”

He reviewed the background to the current consultation and proposed new legislation.    In 2005, he was policing night clubs in central London when the terrorist threat was against iconic buildings and military, and public figures and there were warnings before attacks. The threat then shifted to crowded places including clubs, and the incident in 2007 when two car bombs were left outside Tiger Tiger. “Considerable efforts were made with clubs to improve their safety and security measures, resulting in a 40% decrease in violent crime.”  This involved engagement with the industry, sometimes invoking the appropriate legislation and sanctions to make changes.

The Commissioner discussed how there is a public expectation to be safe in all areas: travelling on public transport, drinking water, at homes and in public spaces. But there is always a cost involved.

He said: “I am a strong supporter of the protect duty, it should be as broad as possible. It needs to acknowledge cost, potentially include no cost options. We don’t want to put people out of business – the cost has to be appropriate.”

My Dyson also outlined other questions to consider such as responsibility for compliance and inspecting: “What will happen where businesses don’t comply? Fines get bad publicity, but companies pay the fine and move on.”

He finished by highlighting how “the Protect duty is about partnership between law enforcement, public sector and private sector”.

Chief Inspector Chris Hay from the City of London Police

Inspector Hay and Simon Rogers presented on the importance of Emergency Trauma Packs (ETPs) and encouraged prominent buildings and business premises to keep ETPs on site. These should be stocked with specialist medical equipment to treat casualties with injuries such as stab wounds, blast injuries and major bleeds. Simon advocated that these should provide quick access and support the best sequence for responding to an injury, corresponding to the step-by-step approach provided in advanced first training.

Don Randall concluded that: “The CoLCPA will liaise with Figan, Inspector Hay and Simon Rogers on developing standards for Emergency Trauma Packs. This will ensure that first responders, businesses, and members of the public have the tools readily-available to respond in the event of an emergency.”