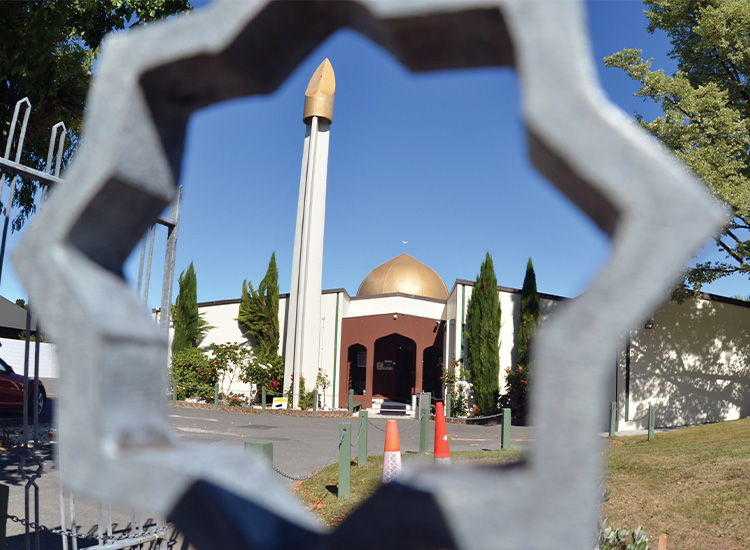 New Zealand-based Gareth Jones, a senior lecturer in leadership studies, a cultural literacy advisor and a security and intelligence commentator, examines the impact of the Christchurch Terror attack, in particular, on the Muslim community, the ongoing response, and emphasises the importance of tackling racism and Islamophobia.

The attack in Christchurch against citizens of Aotearoa (New Zealand) and of Islamic faith has left a deep wound not forgotten. The country stopped that day and was forced to reconsider so much about who we are, why and where we could possibly go from the horror of this event.

Many Kiwis contemplated the horror and huge aroha (love), and awhi (support) was extended to the victims, their families, and the Muslim community immediately after and the following months. Gun laws were changed and quickly. A Royal Commission of Inquiry into the attacks was established. From the horror of this catastrophe, Aotearoa would respond as one people, the saying in Maori ‘Ko tātou, tātou’ (‘We are one’) was the catch cry at the time and would serve as the basis for healing, working through the grief and dealing with immense sadness and loss. Muslims of Aotearoa would be reassured that they were our people and we were them and with them as citizens, ‘Ko tātou, tātou’.

Jacinda Ardern would represent Aotearoa with acclaim and a sincere warmth for those who needed to hear of hope or some sense. The police response at the time was exceptional, the capture of the attacker (far-right white extremist) was done with bravery and professionalism by law enforcement. The attacker (an Australian) is the first criminal in Aotearoa to be sentenced to life in prison with no eligibility for release, the most severe punishment ever given; he will die in prison without release.

Fast forward to 2022 and what is the scorecard on safety and inclusivity for the Muslim community? What do we know from the findings of the Royal Commission of Inquiry into the terrorist attack on Christchurch masjidain on 15 March 2019?

The Royal Commission of Inquiry into the Christchurch attack called for 44 recommendations. The aim of Government was the overarching vision for a diverse, inclusive and safe New Zealand. The work programme is organised across five themes agreed by Cabinet which reflect the response to the Royal Commission of Inquiry report. The five major themes:

Each of the recommendations is related or attached to one of the five themes. According to the Royal Commission of Inquiry Response – Progress Tracker January 2022, of the 44 recommendations, 6 have been completed, with the remaining status underway. The Federation of Islamic Associations (FIANZ), is largely satisfied at where things are three years on. They have also noted that the work the New Zealand Police are doing is ‘gold standard’.

There are some within the Muslim community who are not happy with the progress which is being made and that the measure should be how they feel in terms of a safe New Zealand. With only 6 of the 44 recommendations completed, there is some disquiet that the recommendations are not being addressed in a timely manner.

Recently, Meng Foon, the Race Relations Commissioner, criticised the government’s lack of action in passing legislation cracking down on hate speech and suggested they were lagging behind. He stated that the legislation needed to offer protection to three key areas –religion, gender, disabilities – and went on to say that these groups are not covered at all. Meng Foon then made reference to an attack on a Muslim student at Otago Girls’ High School which was racially driven this year.

Alongside this, a damming report into Islamophobia in Australia was released on the third anniversary of the attack this year. Abuse and violence against Muslims has quadrupled since 15 March 2019 either online or directly. Muslim women have been exposed to the most violence or abuse because of their high visibility and the perpetrators are generally white anglo males looking for easy weak targets. Although the report is addressing Islamophobia in Australia, the Islamic Women’s Council of New Zealand said it was mirrored here, where Islamophobia was also on the rise.

Life in New Zealand as a Muslim

One part of the Royal Commission report of inquiry examines life in New Zealand as a Muslim. It was noted that most of the affected families, survivors and witnesses that the Royal Commission interviewed were Muslims who had moved to Aotearoa as immigrants or refugees. Many of the victims and those impacted family members had experienced intergenerational trauma in the countries they had come from. They had limited support systems, extended family support systems to mitigate against the trauma caused by the March 15 attacks. Additionally, the Royal Commission interviewed some Muslim New Zealand-born affected whanau (family), survivors who were not exposed to trauma that many of the immigrants and refugees had experienced. Finally in the group of interviews, the commission spoke with people born in New Zealand who had converted to Islam. There was a general consensus by all groups that New Zealand is generally viewed positively, but widespread racism, discrimination and Islamophobia exists.

Aotearoa was a place where friendly hard- working people worked alongside each other with little fear of any type of attack of this nature. Feedback from the respondents to the interviews within the Commission’s report also indicated that workplaces were generally accommodating of people’s religious practices and needs. However, many indicated that they had at some point been exposed to some type of personal racist incident or discrimination or family or friends had experienced some type of negative racist incident.

Muslim women who wear hijab spoke of harassment and some people said they are worried about their whanau and friends who wear hijab. Since 15th March 2019, some woman feel more exposed and worried because of the hijab; the fact they are more recognisable is a greater concern today than it was prior to 15th March, 2019. Immediately after the attacks, many Muslim women avoided going to public places and doing activities they had done prior to the attacks, such as going to playgrounds with children or walking children to school.

Unfortunately, post 15 March 2019, there are some real concerns felt by the Muslim community and the families impacted by the attacks that they have not been heard and are still awaiting answers around the deaths of their loved ones. Some families have expressed disappointment at the attention they received shortly after the attacks by case workers in social services and then eventually being put into mainstream and not receiving the same type of support they received immediately after. There is a feeling by some that as time has moved on, they have been forgotten. It is fair to say that some of the those interviewed in the Royal Commission report said that they feel safer and closer to the wider communities that they are in.

However, many also said that they feel less safe than they were prior to the attacks. Suggestions around gated communities, CCTV, regular surveillance at people’s homes, workplaces and mosques have been put forward as potential responses to helping Muslims feel safer. A call for the New Zealand Police to be more active in building genuine relationships with Muslim communities is a common theme amongst those who participated in the commission enquiry. It was noted that since the terrorist attacks, some of the respondents felt that the New Zealand police had been more engaged with Muslim communities and that reported racist incidents had been taken seriously.

Recently I was involved in and supported the hiring of an Islamic female in a high-profile front-facing organisation. The person hired was the best qualified (more likely over- qualified), most suited to the job description advertised, and interviewed the best of all candidates, with very good references.

The fact that she was Islamic was irrelevant; however, when the offer of appointment was made and the organisation was notified, several congratulatory messages came through to myself on being brave, supporting diversity and the willingness to employ an Islamic woman into this organisation. I was a bit perplexed by these messages or positive affirmations, particularly as an indigenous person of mixed heritage, where I hope I am colour blind, creed blind, religious disposition blind and totally oblivious to the fact that this was or should be a significant accomplishment.

My world view of the hiring of this person, was that it is what it is and should not have been categorised or exemplified as something special or uncommon. The issue I had was the focus on hiring someone of the Islamic faith as opposed to hiring a really good candidate.

I followed a process where diversity, inclusivity and equity are key tenets of the organisation and are embedded, that these principles are taken for granted; therefore, for myself, I followed a process for the best candidate and the result was to hire the most suitable person, irrespective of her being a Muslim. I was naturally surprised by the attention or significance and this may allude to my naivety, or cultural literacy or personal world views, maybe all of them combined.

Aotearoa has some way to go to respond to safer, diverse and more inclusive societies for all. The work plan from the Royal Commission of Inquiry is certainly a very good start, but I suspect that this is only a start and there is a lot more we have to do in terms of changing attitudes. The experience shared in hiring someone of the Islamic faith emphasised an underlying tenent that some still consider Muslims different and not quite part of New Zealand society and pushes against ‘Ko tātou, tātou’ – ‘We are one’.

At the end of the day, it is those impacted or affected that should provide the litmus test of how well we are doing and at present the scorecard is under review.

Royal Commission of Inquiry into the terrorist attack on Christchurch masjidain: www.christchurchattack.royalcommission.nz

Senior lecturer in leadership studies, a cultural literacy advisor and a security and intelligence commentator.

See our Counter Terrorism category for more articles on this topic.