The impact of drones on security 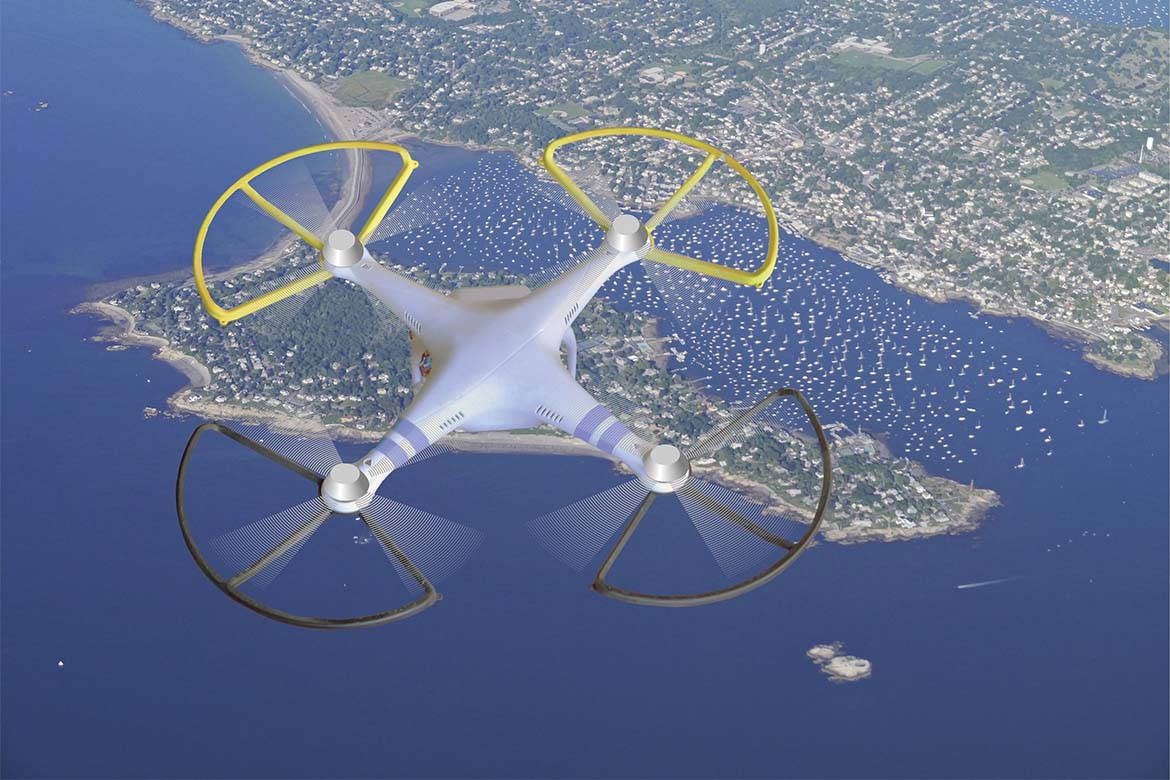 Drones – the impact on security

Your view on drones – or UAVs (Unmanned Aviation Vehicles) as they are more accurately known – may be coloured by your experience or your role, but there is no doubt they are currently making an impact on many aspects of modern life, including the world of security, with almost daily references to their increasing use.

The most recent application to hit the general media is the development of delivery drones by the world’s largest internet retailer Amazon, as reported in The Guardian in March 2015:

“The company wants to offer its customers the ability to have packages dropped on their doorstep by flying robots within 30 minutes of ordering goods online. With innovation in the drone sector reaching lightning speeds… the company’s formidable team of roboticists, software engineers, aeronautics experts and pioneers in remote sensing – including a former Nasa astronaut and the designer of the wingtip of the Boeing 787 – are now operating in British Columbia.”

It is easy to see why people want to use UAVs: they can be a lot cheaper and quieter than helicopters, decrease the risk of those involved and can stay up longer than the endurance of a person. This means their application spans many different commercial uses, such as documentary filming, wildlife photography, precision agriculture and aerial surveys. They can be particularly useful for hard-to-reach structures, such as flue stacks on oil rigs or remote locations.

The charity Mèdecins Sans Frontiere recently reported how it is using UAVs to provide medical support for people cut off by impassable roads and dangerous crocodile-filled rivers in Papua New Guinea, to provide quick diagnosis of TB. Operated from a smart phone, its UAVs can travel up to 37mph with a range of 20 miles to carry up to 10 TB test samples from patients.

So it looks like UAVs are here to stay. Their use certainly polarises views and this is explored in a current exhibition at the Victoria and Albert Museum on the near-future use of drones in a city landscape. This includes a disturbing Nightwatchman surveillance drone tracking its objects through the streets.

In reality, only a small number of police forces have begun to use UAVs, including Merseyside, West Midlands, Staffs and Essex. In March 2015, Sussex and Surrey Police reported that they have been awarded almost £250,000 to purchase five more UAVs as part of an ongoing trial.

This includes the use of a UAV at Gatwick Airport to see whether the equipment could provide a faster, safer and cheaper alternative to officer-led patrols in some circumstances.

Sussex and Surrey Police found that a UAV can cover a distance seven times quicker than officers on foot and can be used in conditions where it is unsafe for helicopters to fly or officers to go, such as smoky environments or when hazardous chemicals or materials have been spilled.

They believe that UAVs can be used to gather evidence from the air, such as at the scene of road, rail or air crashes, help with searches for missing or wanted people and to capture a broad picture of activities on the ground, such as the spread of flooding, the movement of people during public disorder or events at an armed incident.

Assistant Chief Constable Steve Barry, whose portfolio includes the joint Operations department for Sussex and Surrey Police, said “Some of the benefits of the UAV system have already been demonstrated during the relatively short period that we have had the equipment for.

“This is not about providing cut-price policing but about using technology to enhance the way we work. UAVs could prove extremely useful during a range of incidents.”

With such a wide variety of uses and range of capability, it’s no surprise some security technology providers are keen to explore the use of UAVs and a number of applications have been in place for some time. In particular, those responsible for large estates and areas can find drones useful for enhancing remote surveillance. Nigel Arkwright, CTO at the Unipart Group, says, “Companies with CCTV monitoring are in the second wave of those to profit from the use of this technology after photography and film making. Any device with a camera is bound to spark privacy and we have all seen the media scare stories. Having CCTV trained and certified operatives proves a level of capability and training required for drone operators.”

Indeed, the increasing range of new uses can mean that those using UAVS are not generally those involved or experienced in aviation previously.

Regulating the use of UAVs

The Civil Aviation Authority (CAA) is responsible for regulating the safety of UAVs, irrespective of your reason for them. Gerry Corbett from CAA wants to keep their use as safe as possible; he says, “Once you put something into air, it has to come down at some point – so it has the potential to fall and injure people.” For those wanting to use UAVs for commercial reasons, or “aerial work” as it is known in the CAA regulations, then under certain circumstances, they will require an operations manual, and a licence from the CAA which will include a range of conditions. These licences last up to a year. “Any commercial organisation offering this kind of aerial work as part of their service should be well aware of the licensing arrangements and their responsibilities in this area.”

What the regulations say about recreational use

The regulations for the flight of small, unmanned aircraft also apply to recreational model aircraft flyers. However, provided there is no aerial work taking place, and unmanned aircraft fitted with cameras are not flown close to people or property, then permission is not required from the CAA; the aircraft must, however, be flown within the visual line of sight of the pilot at all times in order that the operator is able to prevent collisions.

Enthusiasts in general can, and do, fly models away from buildings and passers by. They are familiar with their surroundings and their models and do not need special permission. The same can be said for the majority of individuals who buy small UAVs with cameras, who don’t invade anyone’s privacy or endanger anyone.

Responding to UAVs near your premises

If you are a security officer or a police officer and spot a UAV, there are a number of key questions to consider:

– Is the UAV within 50 metres of people?

If any of these are the case, you can ask the person in question, do you have CAA permission? Can I see it?

The CAA regulations do not cover matters relating directly to privacy and the Data Protection Act only really applies to organisations and does not cover private use. However, The Information Commissioner’s Office has recently updated its guidance on surveillance cameras to include guidance on UAVs.

Individuals being bothered by UAVS

So what happens when people don’t abide by the regulations? The best advice is the same as for any form of anti-social or criminal behaviour: gather as much evidence as you can, such as ID of the individual and where and when it happened, and go to the police.

– Over or within 150 metres of a  congested area

– Over or within 150 metres of organised open-air assembly of more than 1,000 persons

– Within 50 metres of vessel, vehicle or structure which is not under the control of the pilot

– Within 50 metres of any person (30 metres during take-off or landing). Does not apply to pilot or people under control of pilot

– A congested area in relation to a city, town or settlement.

August 2022 update: Our autumn edition brings a review of security and drones. Subscribe today for your free print or digital copy delivered direct to you:

Subscribe here for your free print copy (UK only)

Counter the threat from drones to business