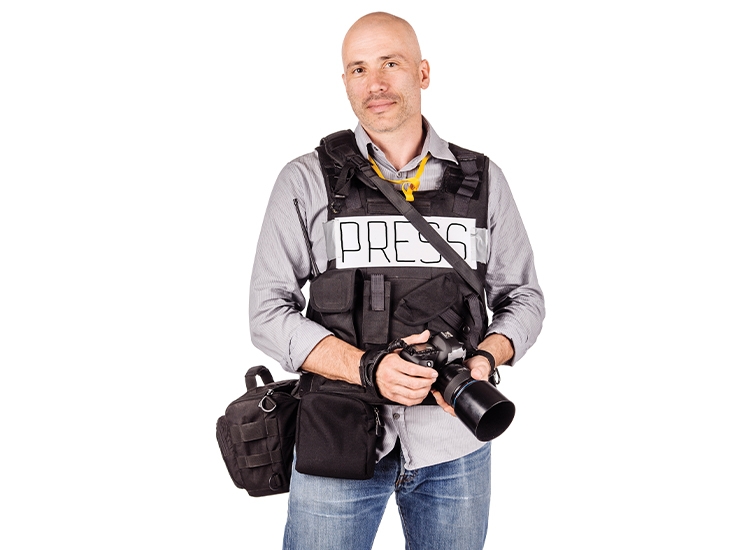 Security and news media organisations are exploring how they can collaborate to raise awareness amongst frontline security industry personnel and journalists about each other’s jobs and the roles they play in public spaces.

Journalists have reported a notable rise in incidents involving security personnel being “heavy-handed” in trying to prevent journalists from doing their job since the start of the COVID-19 pandemic.

In many instances journalists say that whilst they have been stopped, members of the public have been allowed to continue with their mobile phones.

Dominic Cooper from the Chartered Institute of Journalists (CIOJ) says they are concerned about the increasing difficulties between photographers and frontline security staff. Photographers attending events regularly find themselves challenged by guards tasked with restricting all media activity, and situations can often escalate to a point where confrontation becomes almost inevitable.

“We are seeing more incidents of assault on media staff. This is untenable and the problem needs to be addressed as a matter of urgency.  It is unacceptable that anyone should be stopped from doing a perfectly legal job, even more when they are assaulted for doing so,” he said. He explained that these difficulties often arise when security staff have been instructed to stop journalists, photographers in particular, from doing their job. Yet they don’t seem to know that it is not an offence in the UK for a journalist (or member of the public) to photograph or film in a public place.

The Metropolitan Police Website is clear: “Members of the public and the media do not need a permit to film or photograph in public places and police have no power to stop them filming or photographing incidents or police personnel.”

There are a number of reasons this is happening, including the rise of fake news, mistrust of journalism encouraged by certain political leaders and a general lack of knowledge about the role of journalism in a democratic society like the UK. Jason Parkinson, a freelance video journalist who has worked both internationally and in the UK believes it is getting increasingly difficult to separate the bona fide journalists from people who turn up at protests claiming to be members of the press. “Proper journalists abide by a clear code of ethics as to how to behave and what they can and can’t publish. These people call themselves journalists, start yelling they are press and then film the reaction of security and police officers. They then publish their material online without any context or knowledge of press law. Security and law enforcement see them and think we are all bad,” explains Jason.

Jason describes being confronted by security staff on numerous occasions – including at a photocall on London’s South Bank where he and others were poised to film the unfurling of a protest banner on Westminster Bridge. He is now actively campaigning to raise awareness about the problems journalists face when out reporting and welcomes initiatives to try to resolve the problem.

“When trouble kicks off, the press show up. However, so often we find the security teams are not trained enough and don’t know what the law allows. They are thinking they are doing the right thing – but they are not.”

Security staff, in turn, have on occasion had to deal with ill-mannered and aggressive journalists and photographers. Tempers can rise and increasingly security personnel are unwittingly finding themselves in the media spotlight – especially since the advent of social media.

Collaboration between the security and journalist organisations

International Professional Security Association (IPSA) Chair, Simon Pears, is fully supportive of creating collaboration within the security industry and with the wider media/ journalist organisations so that a beneficial relationship exists between all parties. They have already had talks with the CIOJ and the National Union of Journalists (NUJ).

He agrees that part of the problem is security officers are following what their clients have told them to do and is calling for contracts to have clear protocols in place from the start to ensure that journalists and the media are treated fairly and within the realms of the law.

“We are looking forward to highlighting the importance of both the security and media roles, the protocols that should be followed and working towards greater recognition to identify legitimate journalists as they go about their legal business, and at the same time guiding and coaching the frontline security teams to prevent misunderstanding and frustrations.”

The Security Institute Chief Executive, Rick Mounfield, says they are happy to support any initiatives that improve the relationship between security and the media and are offering ways of bringing stakeholders together to come to a consensus in the coming months. Likewise, the Security Industry Authority is also looking at how they can support improving relationships through training and raising awareness.

Journalists and the media organisations representing them believe one way of helping both sectors is the strengthening of the UK Press Card which is carried by most bona fide journalists. Whilst it is not a requirement for a journalist to hold a Press Card to carry out their work, it does help security personnel identify professional journalists who must adhere to a strict code of ethics.

Dominic Cooper says: “Security personnel need to be aware of the Press Card’s existence, what they look like, who carries one, and what the law is in terms of their limited powers. As with any sector, if a journalist IS behaving badly there are procedures and guidance as to what to look for if they do want to make a complaint about them.”

Dominic concludes: “There need to be clear guidelines as to what security staff are, and are not, allowed to do. If they are asked by an employer to stop journalists from doing their work, it should be pointed out that the request is illegal.

“We hope to work with the security industry at all levels to produce guidelines about what staff can and cannot do and encourage better working practices on both sides of this issue; it is in everyone’s interest to get it resolved.”

Each card has a UK Press Card Authority hologram, the logo of the employer or issuing gatekeeper, is Smart Card enabled and has a serial number matched by a pin or password known to the card holder. Cards can be verified by calling a special hotline number. The card is formally recognised by all UK police forces,  the Ministry of Justice, and de facto by other public bodies.