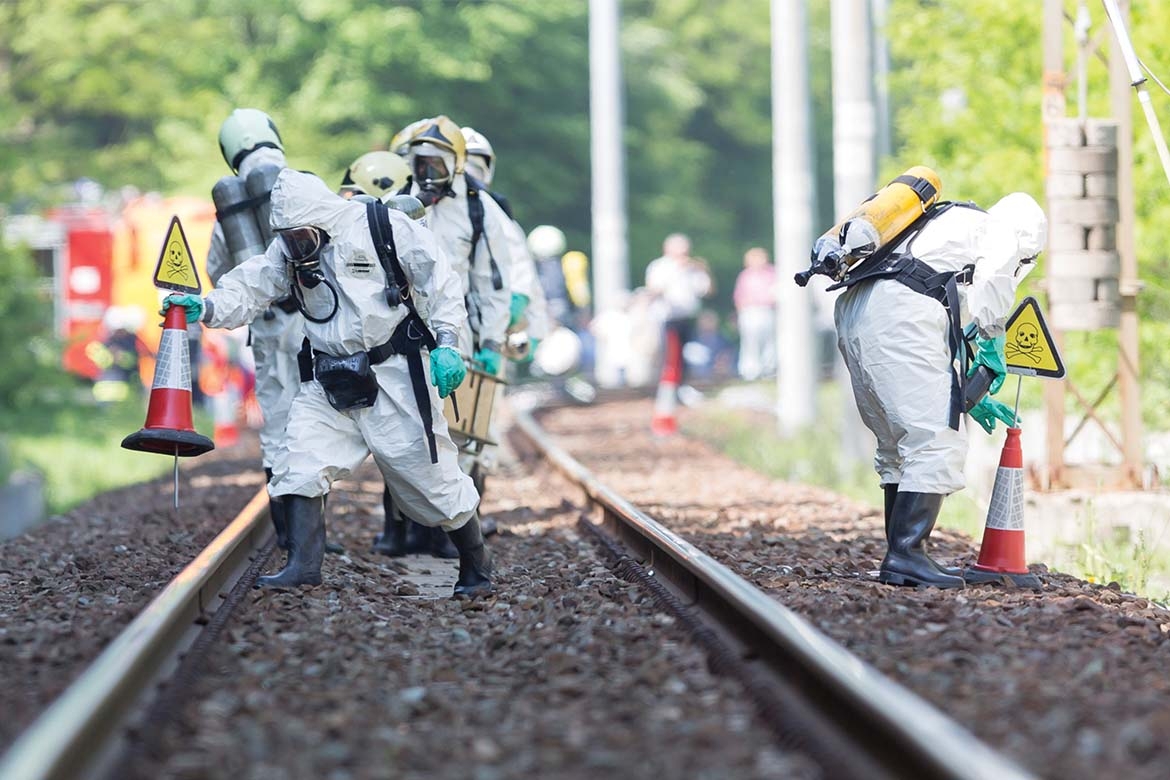 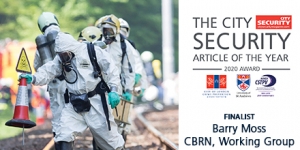 In the development of security professionals to meet the emerging chemical threat, what advice should we give first responders? We explore how security staff could assist when dealing with a chemical incident.

Is it just Novichok?

Noting Phillip Ingram’s article on ‘The Public & Private face of dealing with new threats’ in issue 69 of City Security magazine, I welcomed his view that SIA-licensed security guards could be the ‘zero responder’ at a chemical, biological or radiological (CBR) incident; by this I mean the response delivered before the specialists arrive. Phillip made a crucial point in this article in that the rise in the CBRN threat requires some thought about how the industry prepares staff adequately to cope, in that instance, with nerve agent like the one used in the Salisbury Novichok incident.

That said, nerve agents are but the tip of the chemical iceberg; try a web search for ‘UK industrial chemical incident 2018 or 2019’. Consider also the documented rise in acid attacks, the increasing incidence of chemical accidents of industrial and ‘kitchen sink’ domestic variety, chemical suicides, ‘white powder’ incidents, and the (thankfully limited in the UK) attacks using weaponised and non-weaponised CBR. The question remains, if the threat and risk is rising, what are we doing to prepare?

In late-2018, the national risk assessment process raised the chemical and biological threat levels but only classified these hazards under those two broad headings.

This feels familiar; when we started the national Marauding Terrorist Firearms Attack (MTFA) Active Shooter journey, that risk was classified under that single heading but it has subsequently been broken down to separate vehicle ‘momentum’ attacks, knife attacks, MTFA, and suicide bombing classifications; this is as a result of national experience of the variation of attack types at London Bridge/Borough Market, Manchester, Nice, Paris, Barcelona, and Berlin.

That we haven’t yet sub-classified chemical and biological into the many variations of threats we might see is hampering the development of an adequate response as it gives the false impression that simplicity of response will be required. Yet how we might provide ‘zero response’ to a weaponised nerve agent attack is manifestly different to what we would do for the myriad other potential CBR incidents and attacks mentioned above; of course there’s always the nightmare of MTFA and CBR combined.

The difficulty will always be that there is a limit to training time for staff, and that the CBR threat spectrum is potentially incredibly varied and huge, thereby necessitating training to understand the effective response required; the two will never match. That we ‘prepare’ for the last threat experienced is pretty typical, but purely reactionary, and that we are now focussing on 4th generation nerve agents as a result of Salisbury shows our risk analysis for what it is. From the almost exclusive reliance on specialist emergency service responders, it is obvious that the chemical and biological threat isn’t understood, especially in the ‘most likely’ or even ‘worst case’ forms of attack/incident that would focus ‘zero response’ preparation. If the threat is well understood, then specific focus on that which gives achievable results will be the outcome.

In emergency preparedness and management we think in terms of an all-hazards approach. This often allows the same response to be utilised no matter what form the problem may take. Obviously, this cuts down on responder preparation yet, in the case of CBR, we should consider if the generic one-size-fits-all response is suitable. National guidance under the Initial Operational Response (IOR) programme (see www.jesip.org.uk) and the recent ‘remove, remove, remove’ campaign basically break down response to a chemical attack/incident into dry decontamination as the default, and wet decontamination if the hazard is caustic.

For the remainder of the response, the principle of getting as far away from contamination as possible, as quickly as possible, is the key. Yet there are a number of other steps that security staff could assist with when dealing with a chemical incident. These are predicated on the simple need for a speedy response, which is essential if we intend to save saveable lives in the time available to do so; in broad terms, these steps are based on security staff assistingwith:

It might also be possible to issue urgent advice to limit the effect of the contamination. If security staff have a basic understanding of the effect chemicals may have, particularly those identified in the organisation’s risk assessment as being present at the site, they could provide potentially life saving advice to the victims in the initial phase of response prior to specialist advice becoming available. Furthermore, it is common for hospitals to receive contaminated self-presenters in their A&E receptions; indeed, my local hospital has had five chemical self-presenters through the doors in fourteen months.

Whilst these victims book in and are reporting their illness, they could well be dripping/re-suspending/oozing contaminant onto the reception counter, the waiting room and the triage room.

The principles behind this are fairly simple and security staff are key enablers through advice to contaminated victims regarding limiting their movement, restricting human-to-human contact, being aware of the residual contamination left behind by victims, and ensuring contaminated items are not removed from the scene.

Is a solution possible?

If an ‘most likely’ and ‘worst case’ threat assessment has identified the primary concerns at a location, then the procedures used by, and training of, security staff become a lot simpler. Local Counter-Terrorism Security Advisors (CTSAs) currently advise organisations how to ensure site-specific threat assessments inform response plans. It is a short step for CTSAs to include CBR-specific advice into their output, or for independent expert advice to be sought. Organisations already have training regimes that are becoming increasingly scenario-based. Therefore, incorporating site-specific threats into such a process would not be an undue burden within the routine all-hazards preparation regime.

There will always be elements of the response that are hazardous to security staff, but this is no different to any other threat they face when dealing with the myriad of problems resulting from any incident. Insufficient information around the CBR threat and response means that staff are currently being placed at risk due to an ill-defined CBR hazard. Consequently, they cannot respond intelligently, including keeping themselves as safe as is reasonably possible.