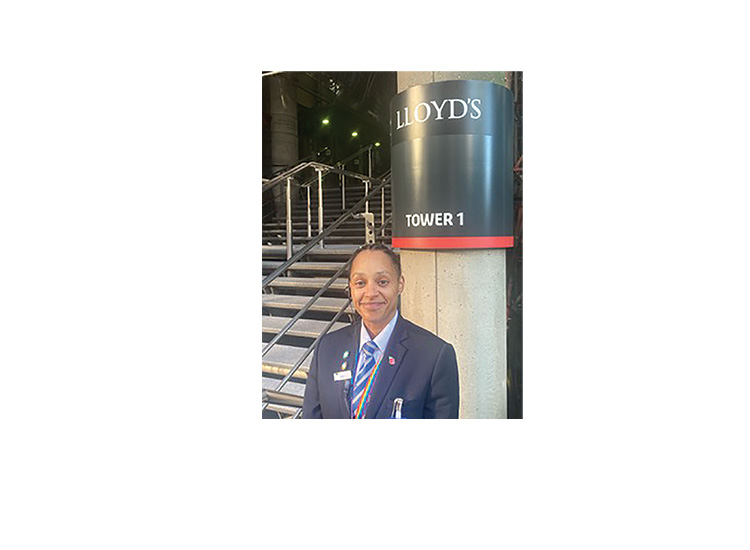 I walked into Lloyd’s of London – the iconic City of London landmark with up to 5,000 people in the building at any one time – on a sunny April afternoon and was about to head over to reception when I was met by a warm smile and “are you Graham?” – I had met Dion!

Dion’s started her career in security when contracted to work at the Palace Theatre in 2017, where Harry Potter was showing, and within three months she was promoted to team leader.

She previously worked at Sports Direct, starting in the loading bay but soon promoted to Store Manager. Her time in a busy retail store brought its challenges but provided her with the opportunity to develop a team, deliver customer service and de-escalate.

It was during her time as store manager that one of her friends had started work at Aon with Mitie. Dion liked the idea of working in a corporate environment and after speaking with her friend, she started work at Lloyd’s as a dedicated relief officer, which after six months became a permanent position as a front of house officer

In October 2021 Dion was promoted to Front of House Security Supervisor, responsible for a team of twelve, although very recently she has been further promoted to Security Operations Support Manager which will increase her team responsibility to up to 25.

Dion puts a sizeable emphasis on the training and development of her team (and herself). She believes that when you are responsible for other people’s safety and welfare,  you must be the best you can at what you do. Her people skills and the ability to engage with people at all levels are also evident when speaking with Dion.

Dion has attended and completed many training courses provided by her company and the City of London Police plus she is a Fire Marshall for the building.

She has, along with the team, dealt with many incidents, including potential intruders and activists/demonstrations. During lockdown, she thwarted the attempted theft of a colleague’s motorcycle that was chained outside the building.

If you were to give someone looking to join the security profession one tip (I ask), what would it be?

“You must have a passion for what you are doing, have an equal mix of professionalism and personal skills and when required be firm but fair.”

What is next career-wise I ask Dion. With her infectious grin she says, “Training: I would definitely like to be able to be more involved in developing others” Why am I not surprised by her answer?

Dion was a recent OSPA finalist, a recipient of two Mitie Stars and she is obviously on a career path to achieve much more. Jason Towse, MD of Mitie Security, best sums up Dion: “Dion is an outstanding ambassador for both our business and client. Not only does she epitomise what our industry and front-line heroes represent, her constant and natural desire to go above and beyond to protect people and property makes her stand out in delivering the exceptional, every day.”