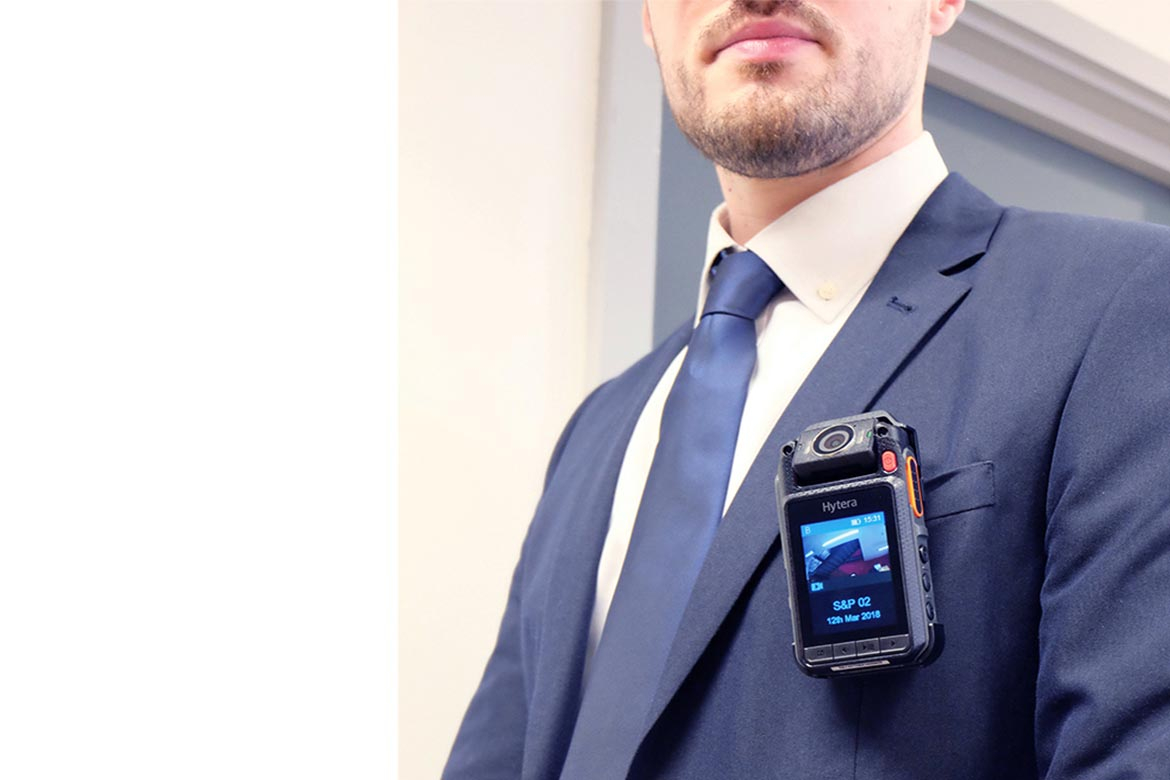 Body worn cameras (BWCs) are increasingly being issued to police officers and security guards as an evidence gathering tool and as a deterrent to anti-social behaviour. Modern BWCs are smaller and lighter than their bulky predecessors with far better lenses, much wider fields of view and a longer battery life of up to twelve hours.

The best BWCs are designed to be rugged and durable with high levels of drop and shock resistance and protection against dust and moisture ingress. Many modern BWCs now support HD (1080p) video quality and feature infrared night vision, so they can be used on night shifts and in places like clubs where the lighting conditions are constantly changing.

Some BWCs double as remote speaker microphones (RSMs) with a push-to-talk button and often an emergency button connected via a cable or Bluetooth wireless technology to a radio. BWCs have integrated Wi-Fi to enable video footage to be offloaded either in the field or when docked in the charger.

The most recent top-end models now incorporate 4G LTE or Wi-Fi technology to support live video streaming via hybrid LMR/LTE two-way radios or 4G smartphones. This provides improved situational awareness of an incident to control rooms and police commanders in the field. But the potential privacy issues and perceived extension of the ‘surveillance state’ make its deployment controversial in some countries.

Bodycams can be programmed to automatically start recording based on various triggers, such as when the officer exits the vehicle, the vehicle’s blue light bar is turned on, the radio or RSM’s emergency button is pressed, or when the officer draws a Taser or weapon.

Some modern BWCs offer ‘buffering’ technology. When the BWC is switched on the buffering mode captures video, but no audio. When switched to recording mode it will save the previous 30 seconds of video-only footage before the recording began and attach it to the recording.

A critical consideration when adopting BWCs is how the video data is treated and stored. Footage can be time and date stamped with GPS location coordinates added. Sometimes it is possible to add metadata via laptops or tablets in the field, or more usually when it is being uploaded to storage in the office.

It is important to have a flexible digital evidence management solution using tags and keyword searches to make relevant sections of video easy to find. Algorithms can be used to scan footage according to particular search terms, saving humans hours of searching.

Access permissions policies provide greater security and a record of who saw what, when, and whether the video was altered for some reason – perhaps to enhance the visual quality of a detail. It is particularly important to have a tamperproof digital solution if the video is to be used as evidence in court.

In the context of the police and security sector, bodycams have a dual function. They are a tool of law enforcement in the form of a ‘neutral’ evidence gathering device. They can also, potentially at least, be used as a means of ensuring public accountability by the police, although this is a double-edged sword as it clashes with privacy concerns.

Video footage of an incident can support the validity of the police or security officer’s version of events and demonstrate whether the officer’s actions were lawful. For example, it can help reveal whether the use of force by an officer was justified in the context or not. The recorded evidence can also be used to refute false allegations made against police and security guards.

BWCs also provide added safety protection for front-line officers and personnel, especially lone workers, who sometimes face abuse and the threat of violence. Studies have shown that bodycams can help to deter verbal abuse and aggression, as people often calm down if they know they are being filmed.

Bodycam footage can also be used for post-incident reviews to help understand what took place and to improve operational procedures. They can provide officers with additional details they may have missed during the incident. Real-life videos also make an excellent training tool. The HD video and improved audio also make BWCs an excellent interview tool, enabling witness interviews to be conducted in the field.

Before issuing police and security staff with bodycams it is important to ensure policies governing their use are put in place. In some countries the use of bodycams will come under protection of freedom and CCTV surveillance legislation. They must also abide by any relevant data protection regulations.

In short, police and security guards must act responsibly, and be seen to be doing so, when it comes to protecting people’s privacy. Countries or individual states may also determine protocols for the handling and storage of video footage and audio recordings and how long they must be kept.

BWCs can be incorporated into a wider connected intelligence network. It is possible to integrate the BWC into a single system with vehicle-mounted cameras to present a synchronised multiple point of view. Integrated gunshot detectors and Man Down alarms can send alerts to the control room along with the location of the officer.

It is already possible to integrate artificial intelligence video analytics to the BWC itself including image, facial and even aggressive gesture recognition technology. Voice activated commands are another potential future enhancement, along with 720° panoramic lenses to enable the BWC to record what is behind the officer.