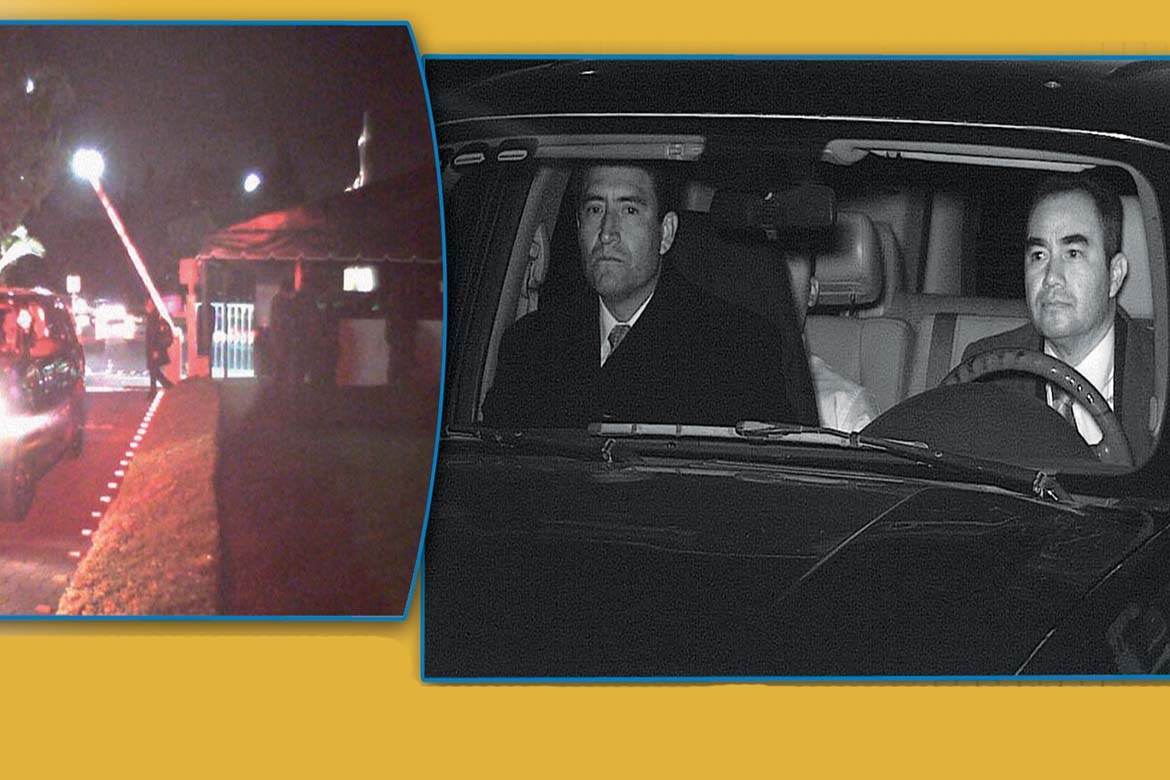 The problem of throughput…

You are a busy facilities manager/security manager in a city or confined environment; therefore, you have very limited space for traffic lanes entering and leaving your location.

You cannot afford to have traffic backing up onto public roads from your facility, but you need to balance this with checking drivers’ details and the vehicle details (with possible vehicle inspections) whilst still ensuring security is maintained at your location.

Currently, it is most likely that you operate an access control system (personal card or vehicle based tag and automatic barriers) and you may have a separate additional check by a guard on the vehicle.

Whilst the card or vehicle tag system speeds up operation, it doesn’t stop a different driver using someone else’s car or card to gain access to your facility, thus fully compromising your perimeter/entrance security.

In the case of higher security locations, you may operate by using guards to check both the driver’s (and passengers’) ID and the vehicle number plate against the guard’s database and knowledge of who is allowed on site. And in the highest security areas or in time of heightened threat levels, you may require the vehicle and its underside to be searched (usually by mirrors on handles and by eye).

Studies have shown that this manual process of a guard checking credentials results in a relatively slow throughput: at best, throughput is approximately 6 vehicles per minute, per lane, with each vehicle requiring 10 seconds for basic ID check (this does not allow for under-vehicle check).

If there is a need to visually check the underside of the vehicle, that can add 20 to 60 seconds depending on vehicle size.

The only solution using guards is to increase the number of lanes entering and leaving, which is both expensive and often impossible in city areas where space is just not available.

The problem of security…

In addition to low throughput, the traditional method of using a guard for manual checking may not offer the best security for either your facility or for your security personnel.

Traditional ID checks are relatively difficult because of the steps involved, as for each vehicle the guard must carry out a range of checks and inspections, including ID card check for all occupants of the vehicle and checks of its contents.

For good security to be maintained, and in busy periods, this may entail the guard having to repeat the process several hundred times per day and never failing in the process or checks.

Adding electronic assistance such as card readers can verify the card to be authentic and even call up a picture of the cardholder on a local monitor, but it still needs the guard to visually verify the person and that all adds more time to the equation.

Recent terror attacks prove that whilst the inside of the facility may be secure, the traffic and personnel outside present a route in and a target in themselves.  Improving throughput is important for the security of both the site and the personnel.

Most importantly, as the guard’s attention is divided between facility safety and their own personal safety, the safety of everyone on the site is not optimised.

The answer to slow throughput…

In an ideal world, every security guard would have a photographic memory and would recognise both the driver and the vehicle, be able to distinguish between normal and abnormal behaviour and any new information, like access being revoked for a particular driver.

With such a good memory and ability to access live and changing information from memory, the guard would be also able to wave authorised personnel and vehicles through and easily know when to stop unauthorised people and vehicles.

If the guard could do all the above, instantly and accurately, and all the time, both throughput and security would be greatly enhanced simultaneously.

Obviously, guards like this are very hard to find … and it is impossible to rely on them not to have to take time off or be put under duress or compromised in some other way.

But augmented with the right technology, every guard can have optimised capability to carry out the job in a secure and speedy manner, without making mistakes or missing vital information, using a combination of facial recognition and capturing the registration plate.

What does facial recognition offer?

In a large population, recognising everyone by sight is a rare human gift, but this is exactly what facial recognition does. Recent breakthroughs in academic research have finally enabled facial recognition technology to achieve its potential, which is to have the same discriminatory power (accuracy) as a single fingerprint.

Today’s best algorithms can successfully recognise a person’s face as being distinct from hundreds of thousands of other faces. Its accuracy far surpasses the capabilities of most humans. In terms of face images, the algorithm is robust to variations in illumination, resolution, background, pose, expression and occlusion.

On a basic laptop computer, the algorithm successfully recognises a face in an image file within one second, even when using a database of several million other faces.

By selecting the most similar match for a current camera image and requiring a minimum threshold for similarity, it is easy for the algorithm to recognise a particular person or determine that the person is unknown (not in the database).

Furthermore, the database can include lists of authorised personnel as well as various ‘watch lists’ if required, such as known protesters, criminals, and suspected terrorists. In this way, security personnel can be alerted early and in a co-ordinated manner when a threat appears.

Earlier facial recognition systems relied on images being taken in quarantined environments to give suitable image quality (think of having your photograph taken for your passport) and therefore required the subsequent images taken from other camera sources in future to be of similar quality and view … this was never going to be viable in the real-world scenario.

It certainly wouldn’t have supported cameras on streets (in hugely varying lighting conditions and weather) or trying to look through darkened glass of cars or reflective windscreens on vehicles.

In the real world for vehicle gates/barriers and roadside operation, the system must be able to capture and recognise a face through a windscreen, even when the windows are tinted, day and night, rain or shine, and at some distance.

Getting a good image under those conditions requires an optimised camera designed for this process and with a specialised and optimised illuminator.

Fortunately, that technology has been successfully developed and is currently deployed in use at hundreds of sites worldwide. It can show driver and passenger faces through the heaviest of tinted windows and is not affected by many differing weather conditions up to distances of 15 metres.

Two-factor authentication increases security greatly by improving recognition accuracy of authorised drivers and passengers. For the system to fail, both detectors (face recognition camera and registration plate camera) must fail. Hence, the probability of error for the combined recognition system, using two detection methods, is the product of the individual detector probabilities of error.

For example, if both facial recognition camera and registration plate camera have a 95% probability of accuracy, the dual-detector (dual camera system) has a probability accuracy rate of 99.75%

In addition, multiple detectors increase the robustness of the security system. If there is a technical problem reducing capabilities of one piece of equipment, the other parts of the system can still provide some security assurance.

Registration plate readers also use watch lists of known vehicles, including those owned by authorised employees, and, if required, can use those known to be associated with protestors, criminals and suspected terrorists.

Generally, for operation at a specific location, two cameras are required, one for facial recognition and one for registration plate reading. The two cameras must be directed at different angles and positioned in different locations, so often two discreet mounting poles are used (if the cameras cannot be fitted to the building’s fabric at the entrance).

If rear-seated passengers are to be detected, an additional two cameras is normal, and if the underside of the vehicle is to be captured and available for instant comparison in future, a scanning set of cameras is fitted on the roadway.

To fully automate the system, a pressure sensor or beam device can be used to detect each passing vehicle and trigger the cameras at appropriate times, allowing the system to automatically:

All of the above takes less than 3 seconds.

If the database of authorised personnel is available, the system will immediately check driver, passengers and vehicle images … this is instant.

If the images of vehicle, registration plate and driver/passengers are not in the database already, they can be automatically captured and stored (enrolling the driver with the vehicle’s details) whilst security is assured using the manual standard operational process by the guard. Once the guard is satisfied that the driver/passengers and vehicle should be granted access and be enrolled on the system as authorised, this can be done quickly and immediately, and in future the system will automatically check and grant/deny access on the basis of the updated information given to the database.

In this way, the system is self-learning and a database can be built up of authorised personnel and their associated vehicles.

In the relatively rare case that an unauthorised driver and a vehicle must be turned around at the gate/barrier, the guard will be able to annotate that unauthorised driver’s photo and vehicle registration by clicking an icon on the photo, and the database can automatically record/add that person to a ‘watch list’.

This method of creating a database through use is akin to machine learning. It makes the system quickly capable whether facilities have existing data or not (very useful for building databases of visiting delivery vehicles or maintenance contractors) whilst eliminating the problem that an existing database might contain old or otherwise bad data.

Over time, enrolment can be tapered off, updating information for authorised drivers only occasionally to maintain current images.

In addition to the added security described above, should the threat level or security requirement warrant it, the system can be augmented to operate with ‘automated foreign object detection’ under the vehicle and X-Ray of the vehicle itself to detect anomalies inside the vehicle.

Drivers are unlikely to object to this use of facial recognition technology because they get immediate benefits: Faster Throughput and Better Security.