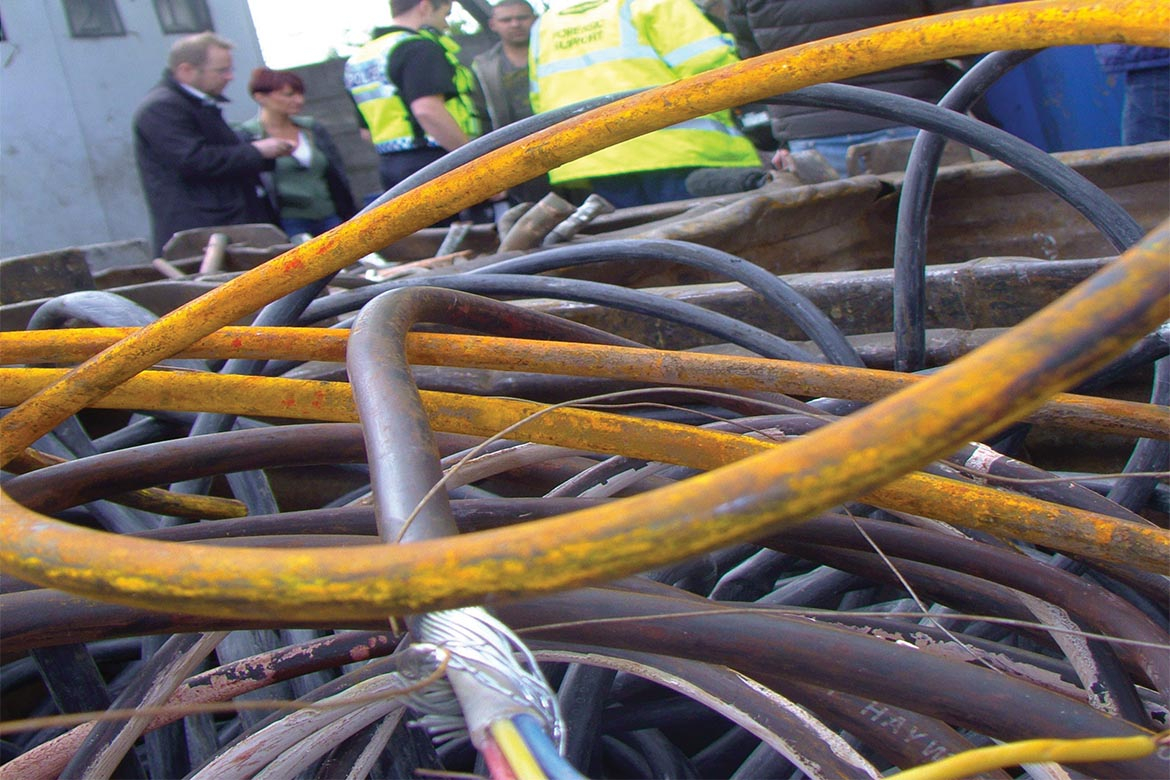 Cable theft from the railway and underground network is being driven by world commodity prices. Theft of cable has had a significant impact on railway operations.

How metal theft affects its victims

Metal theft, in all its forms, is often a crime many perpetrators perceive as a victimless crime. However, over the last 18 months metal theft across the country – and across all industries – has rocketed, with 2011 seeing new records set for the level of thefts in all sectors.

Metal thieves have caused misery for countless people across the country whether it is through stolen lead from roofs, stolen railway cable resulting in delays and cancellations or stolen power cable causing widespread power loss.

The cost of metal theft is enormous with millions of pounds of damage caused alongside the disruption which impacts on the local and national economy. There is also a human cost with more than 10 people dying in the past year as a result of metal theft.

British Transport Police Deputy Chief Constable Paul Crowther, the Association of Chief Police Officers (ACPO) lead for metal theft, said, “Metal theft is a blight on society and sadly it has been having a greater and greater impact on communities in recent months.

“The railway has experienced significant issues for some time, but throughout 2011 we saw criminals diversifying and targeting metal from other areas including power cables, utilities pipework, telecommunications cabling, residential properties, businesses and even vehicles.

“We are all working to make life more difficult for thieves through target hardening, legislation change and stricter controls at the potential point of sale for the thieves – unscrupulous scrap metal dealers.

“Despite this there are still some criminals who are prepared to take risks to steal metal.”

Part of this activity sees BTP officers, together with other forces and a variety of partner agencies, visit scrap metal recyclers to further educate owners about what to look out for when people bring metal into their yards.

Through Neighbourhood Policing Units, advice is also given to residents and businesses on how to make their metal more secure and more difficult to steal. Roadside checks are also being carried out to target those using the road network to transport stolen material.

DCC Crowther added, “Our extensive work with scrap metal recyclers – working with the British Metals Recycling Association to bring in a voluntary code of conduct, educating dealers about the methods used by thieves and showing dealers what stolen metal could look like – has made life more difficult for thieves and we will continue this work to further frustrate criminals.

“But the thieves are still operating and we are aware that there is a minority of metal recyclers operating in an unscrupulous manner. As such we will target those dealers who continue to flout the law and will use all legal means – as well as powers available to partner agencies – to clamp down on the thieves themselves.

“The primary legislation for police – the 1964 Scrap Metal Dealers Act – doesn’t keep up with today’s criminal activity. For instance, while scrap metal dealers are required to register with the local authorities, there’s no incentive for local authorities to register them.

“Similarly, they’re supposed to take a name and address from individuals as well as vehicle details, but there’s no requirement to take any actual ID.

“Currently, people can simply give a name and address and walk away, which provides a high degree of anonymity to the criminal. This in turn means that the material is very difficult to trace and, once it finds its way into the industry itself, it quickly becomes legitimised as it’s traded up between the various tiers. It’s almost impossible to prove where it came from and, if you can, that the person that’s currently holding it has criminal knowledge of its origin. “

However, legislative changes are now being proposed.

Earlier this year, amendments to the Legal Aid, Sentencing and Punishment of Offenders Act were proposed which sought to remove cash from the industry, increase financial penalties and provide greater powers of entry for police.

In June, Richard Ottoway MP introduced a Private Member’s Bill, a Scrap Metal Dealers Bill, to re regulate the scrap metal industry and introduce the measures we need. The new bill proposes licences administered by local authorities and funded by licence fees.

The proposed bill will oblige scrap metal dealers to complete detailed records of transactions, including photographic ID of the person to whom the payment is made, registration of vehicles used to deliver the metal, description of the metal purchased and receipts. These records will need to be made available for a period of two years and sellers of metal will also be required to provide ID at the point of sale. The proposed bill will also make it a criminal offence of trading scrap metal using cash, which will take away the ease of conversion of stolen goods. It will by its very nature implement traceability.

In the meantime, the Association of Chief Police Officers has rolled out Operation Tornado across several regions of England and Wales.

This operation see those selling scrap metal to participating dealers required to provide proof of their identity – either a photo card driving licence including an address, or a passport or national ID card supported by a utility bill, which must be under three months old and show their address.

Tornado reduces the incentive for thieves to steal and sell-on metal as the new measures removes the anonymity that the Scrap Metal Dealers Act has supported for so long.

And the early signs are good – in those areas in which Tornado has been in operation for some time all police forces have registered reductions in the level of offending.

DCC Crowther added, “Operation Tornado is one of a number of measures currently being explored to restrict the sale and movement of stolen metal. It has been designed not to inhibit those dealers that operate legitimate businesses, but to remove unscrupulous dealers who operate outside the law.”

How you can help.

For further advice and information call 0800 405 040 and ask for the Crime Reduction Department.

The loss of your cable could cause significant delay and added expense to your project.

Head of Media and Marketing,