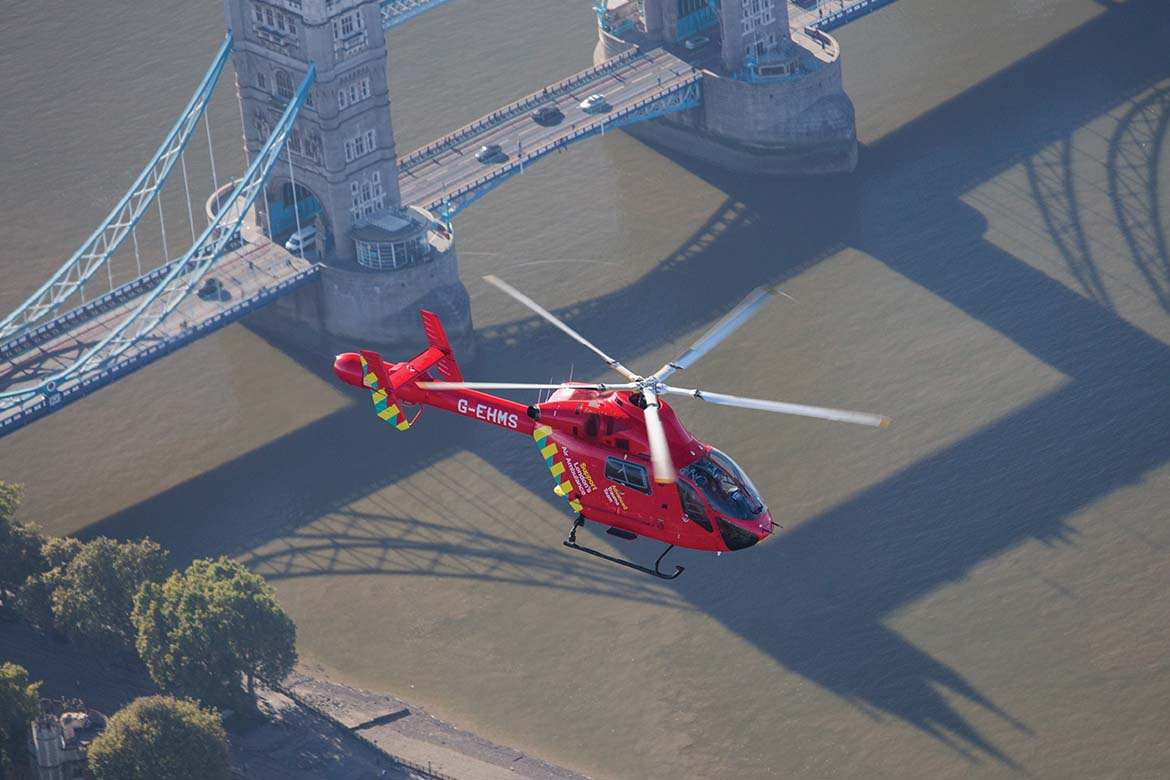 In early 2016, a second helicopter becomes operational for London’s Air Ambulance. We spoke to Medical Director, Dr Gareth Davies, and Chief Pilot, Captain Neil Jeffers, about the service, the impact of the second helicopter and how security teams can provide support during an air ambulance mission.

The speed of a helicopter means the London’s Air Ambulance advanced team can be by a patient’s side up to eight times faster than a response car and they aim to be available to fly every daylight hour possible. To achieve this, a second helicopter is crucial.

Gareth explains, “Helicopters require considerable maintenance; inevitably this means that many days of the year we simply don’t have access to one. With a second helicopter, we can continue our vital work without delay. It gives us the resilience to operate in all hours of daylight.” The newly acquired MD902 Explorer, together with extended daylight flying hours in the summer months, will enable them to reach an estimated 400 additional patients by air each year.

The service, based at The Royal London Hospital, has been operational since 1989. It has pioneered medical innovations that have impacted trauma care throughout the world. This includes carrying a doctor on board at all times and performing advanced medical interventions, normally only found in the hospital Emergency Department, such as open heart surgery (thoracotomy), with world leading pre-hospital survival rates of 18%.

With this national and international reputation for excellence, many doctors are keen to work on London’s Air Ambulance, Gareth reveals. “We attract a lot of applicants for posts; senior doctors from all over the world are keen for the unique experience and training we provide. This means we get to work with the best of best. People probably don’t realise they are being treated by some of the best doctors in the world.”

Captain Neil Jeffers, Chief Pilot at London’s Air Ambulance, has worked for the charity for more than ten years and conducts approximately one hundred emergency landings per year in one of the busiest airspaces in the world, ensuring the advanced trauma team gets safely to the side of critically injured patients.

Neil describes the challenges. “Being a pilot at London’s Air Ambulance means you get to know the city’s landscape very well and where the aircraft can land. However, trauma can happen to anyone and anywhere – so we never know when or where the next mission will be.”

The frequently asked question by Londoners is how do you find a good place to land in this heavily urbanised and populated landscape? Neil answers, “You work closely with the co-pilot to decide from the air on the most suitable place to land. Bridges, box junctions and multi-storey car parks are good places to land, so are sports pitches and fields. We often also land in busy, high profile locations such as Trafalgar Square and Horse Guards Parade.”

Of course, the ever-changing London skyline means there is a lot to keep up with, as Neil points out. “Cranes get higher, trees get taller, and buildings get developed. The skyline is constantly evolving and all of our pilots go through continuous extra in-house training to overcome the constant changes.”

London’s Air Ambulance is often at the forefront of any major incident in London and liaises with the other emergency services on the scene.  They have a well-exercised understanding of the structures used. Gareth describes the approach. “All emergency services follow the same Gold, Silver, Bronze command structure, so when we get on scene, we try to meet the Silver Command from the Police, Fire and Ambulance and work out we how we can assist.”

Gareth is convinced of the benefits of businesses operating within the same approach. “You know exactly what level you are speaking to and it’s a quick way to get round the issue of not knowing names and ranks. It has been very helpful at incidents, in particular on the railway, where they have mimicked this structure.”

It’s clear that London’s Air Ambulance is treating the most seriously injured and ill people in London and the wellbeing of the teams involved is critical. “Some of the scenes we witness and what has happened to the people involved are quite harrowing. It is important we acknowledge and address this,” says Gareth and continues, “We have a healthy, open culture where we debrief every mission and go over every detail from top to tail, seeing how we could do it better, what we could improve. During the debrief people are able to express their feelings, this is an inherent part of our culture and the process.”

Gareth believes the London’s Air Ambulance teams find the best support comes from each other. “If you’ve been underneath a train with a patient who has been trapped there for an hour, in cramped and dangerous conditions, you want to talk to someone who knows how scary and isolating this is.”

The partnership is completed with the financial support coming to the charity. “There is a complete spectrum of support that individuals and corporates can offer. We like to think of all patients as members of our family,” says Gareth. “The sponsorship we receive is part of that partnership and that family.” As part of this, CIS Security have established a fundraising partnership with London’s Air Ambulance. In place since October 2014, it has helped raise over £24,000 between company donations, events and staff fundraising.

Carl Palmer, Executive Chairman at CIS, says, “I was moved to support the charity by the incredible difference that it was making to the lives of people in London.”  He added, “Every other person I speak to seems to know someone whose life has been touched by the Air Ambulance, and that means lives have been saved, or in some cases, extended to allow loved ones to say goodbye. That, to me, is a powerful thing.”

Gareth was keen to thank all the supporters of the charity. “We simply wouldn’t be here without them. We’d be waiting in emergency departments for people to be brought in a much worse state.”

It’s clear that all those living and working in London in return would like to say a big thank you to London’s Air Ambulance for their invaluable life-saving work.

To find out how you can support London’s Air Ambulance, please contact:

How can Security Teams help?

Gareth highlights the importance of their help. “All our patients have a time-dependent injury or illness, and so we need to get to their side as quickly as possible to start treating them. We have the same drugs and equipment that are available in an emergency department. Every second or minute we waste can affect the outcome for the patient – this speed is a big part of their care.”

He explains some of the simple things the security community can do to help his team get to the patient quickly: