Kidnap and ransom: a global trade 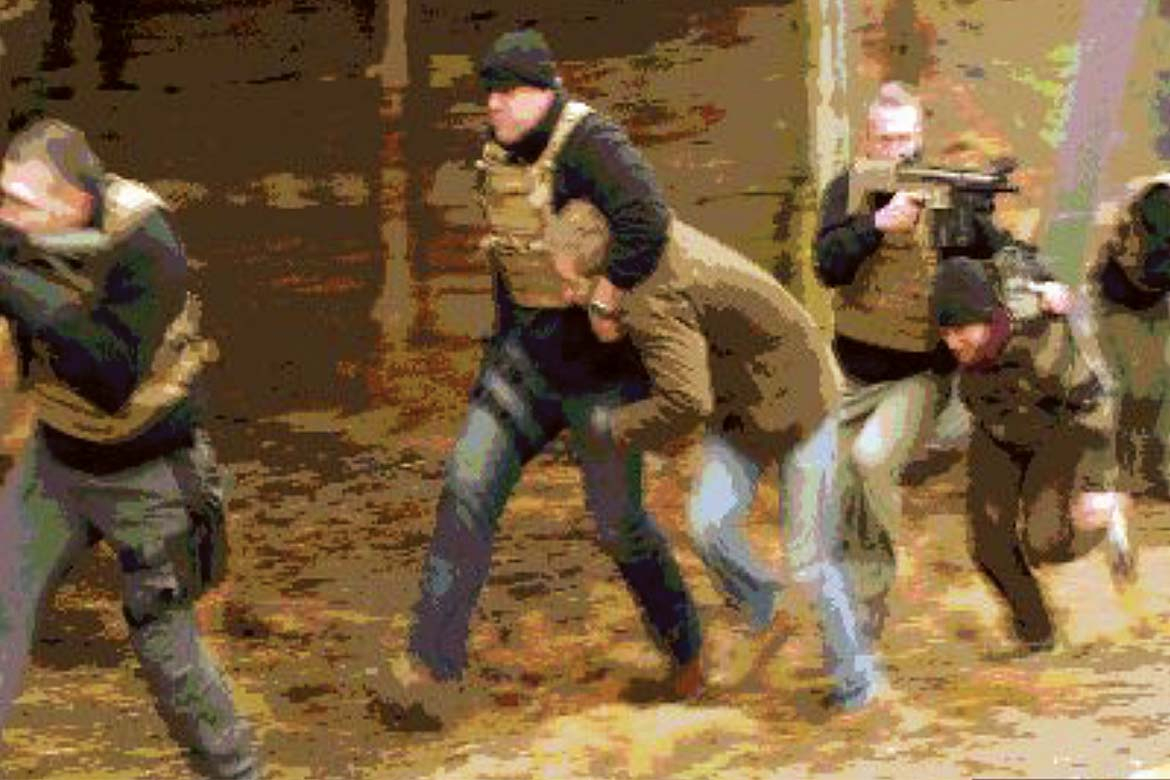 The reality, unfortunately, is poles apart from these misconceptions, with the global threat of being kidnapped increasing year on year. The business model of Kidnap and Ransom (K&R) is being copied and developed across the globe, just as any other successful business template would be.

Kidnap in itself is as old as the hills, with cases often found in the Greek and Roman Empires with prominent political movers and shakers of the day finding a loved one abducted and held in return for political favour or financial reward.

The term to kidnap is a relatively new one, dating back to around the fourteenth century.

However, the act of kidnap goes back thousands of years, particularly when we focus on the abduction of slaves and brides in the ancient empires. Indeed this area of kidnap has prevailed to this day in one form or another.

To further understand the increased spread of kidnapping in recent times, we must look in more detail at the types of abductions and the people behind them.

Political kidnaps are often high profile, such as the Aldo Moro abduction by the Red Brigade in Italy in 1978. These cases are normally aimed at governments to extort some form of political concession. This invariably makes them potentially the most dangerous for the victims, as the demands cannot always be met by the government bodies involved. There is often a cross over with political kidnapping and those cases of a religious root, such as the Terry Waite case in 1987.

Religious kidnaps, where the religion of the victim or the kidnappers is a main factor in the kidnap, will ultimately have some form of political demand, but will often have developed as a means of financial gain. There are a large number of kidnap cases now cropping up in Syria, mainly around the media. It is likely that in most of these cases, the victims were seen as a means to financial gain, a product to be taken and then sold on, perhaps several times. This is now becoming a model for even more kidnap cases in many areas, with local criminal gangs acting on behalf of known terror groups in a trading role, often with no political or religious affiliation to the end group. Both political and religious kidnappings have the potential to go on for several months or even years.

Previously in some hostile areas, kidnapping was primarily politically motivated. This, however, is no longer the case, with many other factors, but mainly financial gain, being the main objective. This leads us on to the largest area of kidnap, financial gain. This can take many forms, but generally kidnappers target local businessmen and their families, who are perceived to be financially well off in the local region.

Often the ransom demand is relatively low as the kidnappers’ aim is to set a demand and receive payment in as short a period of time as possible. These types of cases have spread globally, mainly carried out by low key criminal gangs who want an easy target, who is perhaps rich (in local terms) but does not have the budget for a full protection team or other security measures. The criminal gangs would aim to turn these cases around within a very short period of time, from a few days to perhaps several weeks.

The next level for financial kidnap is the targeted high net worth individual. Again carried out primarily by criminal gangs, but often of a more sophisticated nature. This type of kidnap will normally require a lot more reconnaissance and planning, so would possibly have a financial backer or investor. The gang would have profiled a potential victim for his perceived negotiated ransom payment from his family, employer or insurance cover. This type of targeted kidnapping for a high ransom is rare, mainly because of the costly nature of setting the abduction up and the fact that most high net worth individuals are now very security conscious, with close protection teams, armoured vehicles and very sophisticated security systems and procedures in place. Cases of this nature do not normally extend for a long period as the targeted victims are selected on their ability to pay the ransom demand within a short period of time.

This brings us to the bottom end of financial kidnap, the Express Kidnap. This type is most definitely on the rise in many regions across most continents. The victim, who could be a businessman or student backpacker, will be tricked or abducted into a car, then taken around banks and ATMs and forced into withdrawing the maximum limits on all accounts, credit cards, travellers cheques etc. The kidnappers are only after a quick financial fix and are not normally geared up for a period of twenty-four hours or more. Once all cash and valuables have been extracted the victims are normally released, often unharmed. There are, however, many cases where the victim is not only robbed but also beaten, tortured and raped before being dumped naked at the roadside.

Express kidnaps occur mainly in towns and cities, as that’s where the banks are. They often start with picking the victim up at the arrival airport, but they can also be selected at hotel check-in or even followed into their private residence. These cases are normally only a one-day affair; however, there have been incidents where the victim is held for several days to allow the kidnappers to extract the daily maximum cash withdrawal from all bank and credit cards.

Maritime kidnap also falls into the financial gain sector of this business, with large ransom payments being levied at ship owners for the return of the ship, its cargo and the crew. The main leverage the kidnappers have is the fact they have the crew, as well as high net worth property that the ship owners will potentially lose large amounts on, if held for any length of time. The cases of maritime kidnap and ships being taken has been on the decline for the last year or more; however, the concept of maritime piracy has been copied and rebranded in many regions and will therefore be with us in one form or another for the foreseeable future. These cases can be over within a few days but are more likely to run for several months or more.

Another form of kidnap that is on the rise is the Tiger kidnap. This entails the criminal gang targeting a victim to demand that their family or loved ones carry out a preplanned criminal activity for them.

This is the ransom payment, with the victim’s family charged with carrying out a robbery, murder or even planting a bomb. The criminal gangs will specifically target the victim to force the “key” to carry out the crime. These kidnap cases are normally well planned and are therefore not the remit of low-level criminals. This model of kidnap has been copied across the globe with a large amount of success. The length of kidnap is not normally very long as the kidnappers will be on a time line to achieve the perceived payout or criminal action.

The virtual kidnap is a scam or pretend kidnap scenario where the victim’s family is tricked into believing that their loved one has been abducted. These are normally carried out by low-level criminal gangs, who will demand a small ransom payment. This is normally due to the short window of opportunity they have to accomplish the con.

The last areas of kidnappings all involve the victim as the product, and not always for financial gain. Bride, slave and child abductions are all increasing forms of kidnap. All three have been around for thousands of years in many various forms. Bride kidnaps are a form of forced marriage, particularly found in many countries in Africa and central Asia. The slave kidnappings are greatly driven now by the international sex industry, which spreads to all corners of the globe. The cases of child abduction and the believed origin of “Kid Nap” are very diverse, from involvement with the sex trade to marriage disputes, particularly with parents of different origins.

Why and who is doing it

The main reason for kidnap is for financial gain in one form or another. This is often down to the “Rich man Poor man” global imbalance. Your perceived wealth makes you an automatic potential victim in over 90% of countries that you might do business in. You will be profiled for your cash, by the clothes you’re wearing, the iPhone you are talking on, the leather luggage your wife bought you and the 007 glow in the dark with built in shark repellent watch that you always wear on missions (business trips). Sometimes it could be blamed on wrong time wrong place, but this is often a poor excuse for not pre-planning and mitigating the risks in each region and country you visit.

The perpetrators of the kidnaps, well they’re normally businessmen too; only their product is you!

Given more time and pages we could look at the statistics on a country and region basis but, to be honest, the list of types of kidnap above could happen anywhere in the world. The top ten countries fight with each other year in year out for the number one spot. However, it is practically guaranteed that Nigeria, India, Mexico, Pakistan, Yemen, Afghanistan, Iraq and a large portion of South America will always make the league tables. They now have competition from other countries for their placement in the top ten, from the likes of Venezuela, Sudan (North and South), Syria, and Libya etc. Many of the figures surrounding K&R will vary depending on who’s writing them, such as the number of kidnaps per year: 20,000 per year, 30,000 per year, even more in some cases, have been quoted. The undeniable fact is that the global trade in human kidnapping for ransom is on the increase.

How does a company or individual who lives in the Western world, and is therefore most likely to be in the top 3% when it comes down to wealth and earnings globally, mitigate against becoming a victim of kidnap? Well, you can take out an insurance policy, which is most definitely a good idea, you could perhaps adapt your working regions so you don’t visit any of the “bad-land,” but these hostile areas or “bad-lands” are spreading along with the kidnap business model. Another option is to take professional training to teach you or your employees about the risks, how to recognise them and how to prevent you becoming one of the statistics of kidnap.