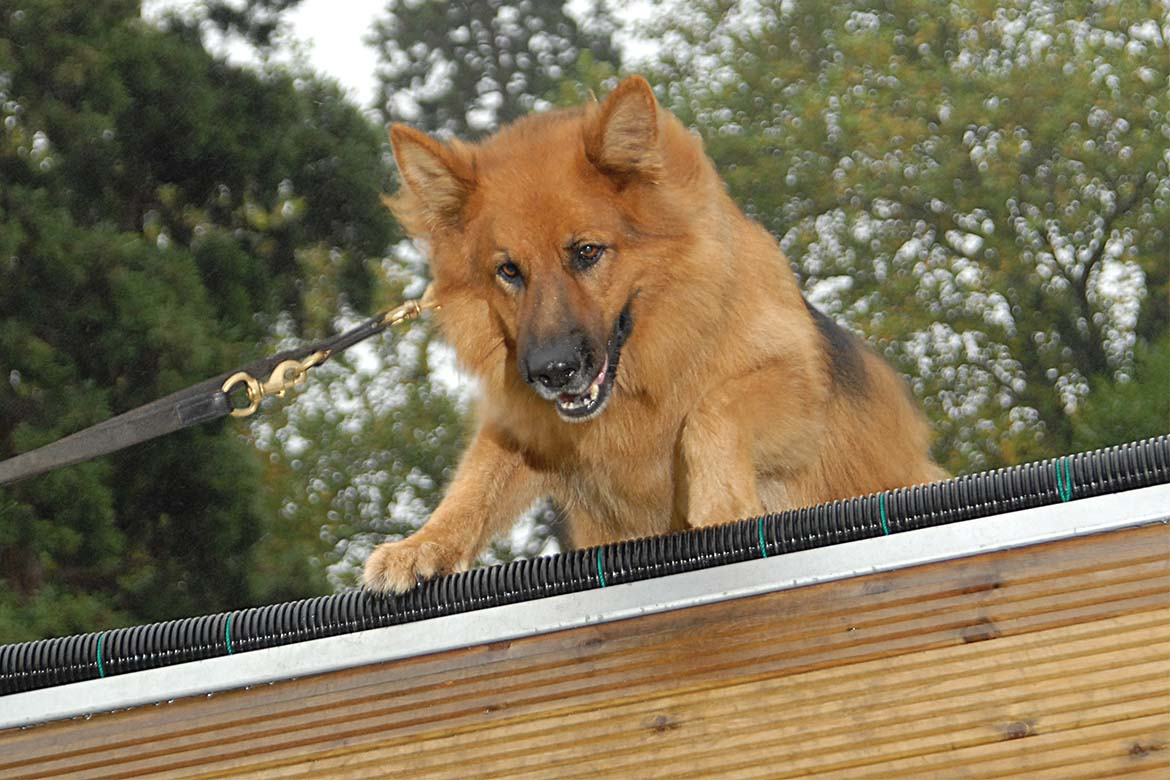 It’s a dog’s life…how good guard dogs are trained to obey and protect.

Ali Tod is having a tricky day. Eager two-year old German Shepherd, Barron, is supposed to be demonstrating his obedience in a series of tests, but today the playful canine is not playing ball; instead he’s choosing to creep forward whenever his handler’s back is turned.

It’s a futile game – and one in which there can be only one winner. Ali has a discreet word with Barron’s handler and the dog is made to repeat the task until he gets it right. Fifteen minutes later and Barron is rock still: a short command from his handler and he comes running, completing the task in the way it should.

It’s a job well done for Ali Tod, a retired senior instructor at the Metropolitan Police Dog Training School and the man in charge of Ward Security’s Dogs Division. Responsible for the training and welfare of 30 dogs, all of which are trained in general purpose security or explosives and narcotics detection, he’s used to the odd bit of ‘showboating’ from his dogs.

He also knows that, when it comes to the real thing, he can rely on the dogs and their handlers to perform. “There is an expectation on handlers to attend training, but unlike other companies where the handler has to pay for training, at Ward Security it is all provided as part of the job,” he says. “There is a minimum amount of training required but the vast majority of trainers achieve a level of competence far in excess of these minimum standards.”

And there’s no doubt that business is booming for the Dogs Division, with several prestigious contracts currently in negotiation.

In his role with the Met, before which he’d served for 22 years with the City of London Police before transferring as a full-time instructor, Ali has seen dogs in action for more than 20 years and is well aware of the advantages that using dogs in specific situations – many of them high risk – can have. Most obvious are the physical advantages that dogs offer: a patrol dog can identify a sound’s location much faster than a human can, as well as hear sounds up to four times the distance that humans are able to. And, while we might think we have a good sense of smell, it’s nothing compared to our canine friends: a patrol dog’s sense of smell is about 36,000 times more powerful than a human’s.

“Dogs have the ability to find intruders, even on patrol when perhaps a normal security guard may miss them, because their sense of smell is so enhanced,” says Ali. “They also offer the most effective visual deterrent.

“Intruders, vandals, or people wanting to steal, damage goods or property, will think twice knowing there’s the possibility of coming up against trained dog patrols.”

It’s clear that patrol dogs are psychologically demoralising to criminals; well-trained dogs show controlled aggression against anyone who confronts their handler. And, as anyone who’s witnessed a bite test will know, given the command, a dog will simply not let go of an offender until he’s told to.

Using dog patrols can be more cost-effective, particularly if a company has large open areas to protect (parkland, industrial parks etc.). “If you do have suspects on the premises or someone missing, a dog can cover the ground a lot faster than a person can,” says Ali. “In this situation, you can use one dog in place of five or more people, offering customers a more efficient, cost-effective service,” he says.

But it’s the combination of physical presence and special abilities in situations such as airport security where dogs really come into their own, whether it’s providing general purpose patrol or specialist services like bomb and drugs detection.

“If the public see dogs in a high security area, then there’s a perception of greater safety,” says Ali. “Whether you’re searching or not doesn’t really come into it – it’s about having that added presence and peace of mind that dogs can provide.” Ward Security has conducted a number of specialist searches for the Metropolitan Police and a number of City institutions.

When it comes to specialist searches, dogs are extremely flexible; they can move easily, unlike mechanical instruments, and they’re not likely to break down. They also offer a more cost-effective solution – particularly when things deviate from the norm.

Of course, it’s important that the dogs are trained to recognised standards. NASDU (the National Association of Security Dog Users) is the organisation that promotes welfare, standards, training and education within the security dog sector. It maintains nationally recognised training and operational standards for security dogs, their trainers and their handlers; security companies who adhere to NASDU Inspected status can demonstrate the highest levels of operational efficiency.

Ali, who has been an instructor since 1998 and is a fully accredited ACPO (Association of Chief Police Officers) General Purpose, Explosive Detection and Narcotic Detection Dog Instructor, says this can help clients make the right choices for their dog security provision. “If you say your dogs can provide highly-technical skills like bomb and drugs detection, then it’s important that the dogs are trained with the real thing,” says Ali. “It’s important to ensure that dogs are actually worked on proper explosive and that individuals examine the training records of these animals. Don’t take someone’s word for it!”

NASDU standards also govern dog welfare and the all-important relationship between handler and dog, something which Ali says is critical for optimum performance. “All our dogs live at home with their handlers – they see them more than their own partners. Everything needs to be audited and recorded, from vet treatment down to worming and flea treatment.”

And, while Ali admits that a dog team might be more expensive than static guarding, he says the efficiencies that a dog can bring to a security situation, well outweigh the costs involved, offering not only a more effective but more cost-effective security solution.

“Just make sure you choose a NASDU recognised provider, and don’t base your choice on the cheapest price. It might just come back to bite you!”