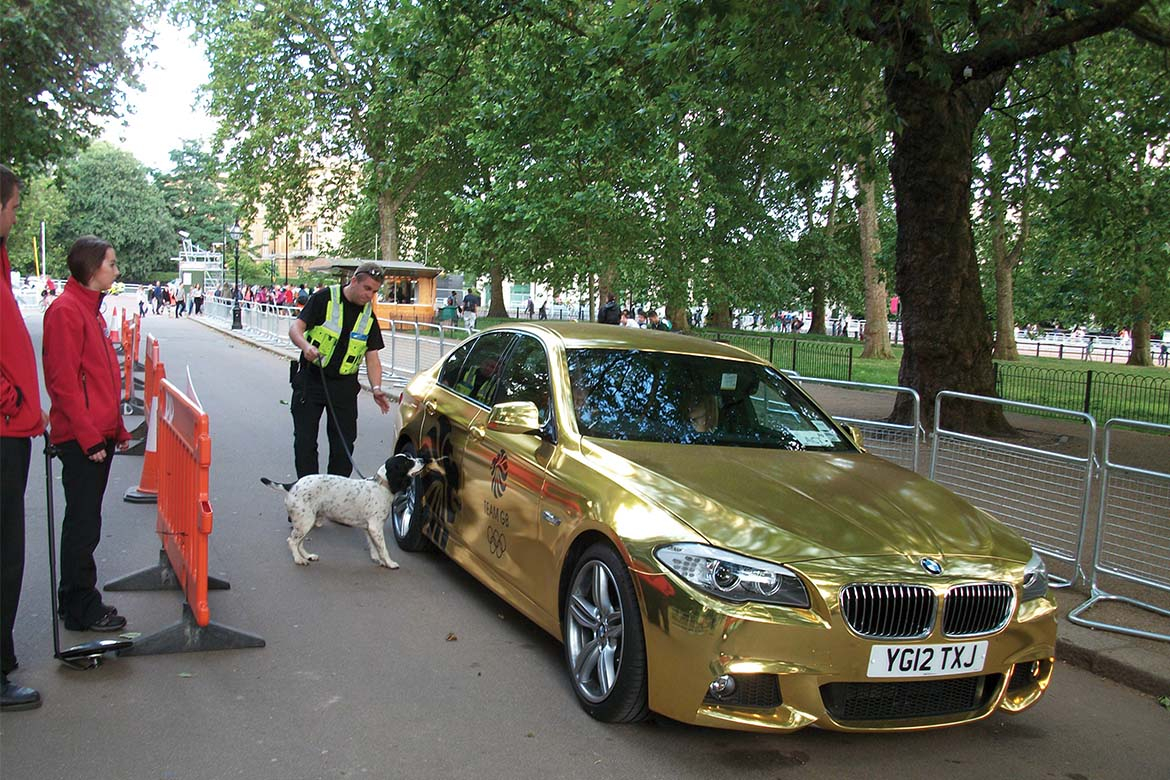 Why employ an Explosive Detection Dog?

I arrive at a mid-terrace property in South Wales; the owner has advertised a dog for sale on the internet. As I stand in the kitchen talking, I am aware of a small black scruff, jumping up at the window. After several minutes looking at this bouncy dog, I am led out of the back door and into a tiny back yard, to be greeted by a small black dog who immediately deposits paw prints all over my trousers and jacket.

As I try to brush off the prints, I notice the paving slabs can barely be seen for dog faeces. There’s a small wooden shed in the corner of the yard, strewn with rubbish, torn plastic sacks and broken window glass: this is home for the little black spaniel bitch, Pip. That was on Saturday 25th February 2012, a day that I will not forget as Wales were playing England in the Six Nations. It’s a match that, as a proud Welshman, I would never normally miss, but Chester, my current explosive detection dog, was approaching his 12th birthday and I needed to find his replacement. A dog I could train and have operationally ready for the London 2012 Olympic Games.

I decided to give the owner the £210 he had asked for Pip. I would normally have taken time to assess a potential sniffer dog and carry out suitability tests, but on this occasion I let my heart rule my head. I’m pleased I did.

Life as an Explosive Detection Dog

Twelve months on and I hope that Pip has forgotten about her miserable existence before becoming a “bomb dog”. During her training she has been introduced to dozens of new and exciting environments; train stations and ferry terminals, schools and building sites, even Trafalgar Square. Not once has she been fazed, something I still find astonishing given the start she had in life. In order for her to carry out a role as an Explosive Detection Dog (EDD), it was necessary to put her through her paces rigorously, as she is expected to carry out searches in almost any environment, without being put off by the location or anything going on around her.

During the past eight months Pip and I have travelled the length and breadth of the UK carrying out explosive searches. Vehicle checkpoints, rugby and football stadiums, colleges, office blocks, theatres, post rooms, aircraft, ships and exhibition centres are just some examples of the day-to-day searches that are now part of Pip’s life. Since becoming operational, she has carried out 129 explosive detection searches, not bad for a dog that at one point in her life had such a bleak future. Chester is now happily retired and Pip has turned out to be a remarkable little search dog.

Today, Pip is a fully trained and fully operational EDD. Following many weeks of training she can detect all of the current explosive threat scents which might be found here in the UK, from trace explosive scents to bulk quantities of explosives.

But it doesn’t always turn out so successfully. Had Pip not developed into such a gifted sniffer dog, she would have been added to my growing collection of dogs which haven’t made the grade. Finding a sniffer dog is a very difficult process, but it is a challenge I relish. I would estimate that out of ten dogs tested and evaluated, only three have the potential to start a course of training, and there is no guarantee that once a dog starts its training, it will complete the course.

So, why employ an Explosive Detection Dog?

Quite simply, an EDD remains the most consistent and reliable method of detecting explosives. In the current security climate, there is an ever-increasing demand for an EDD team. With its versatility, an EDD team is a real asset for a private company or government department. A dog team is not only a deterrent, but quicker, more effective and significantly more accurate than a human search team. What one machine can search vehicles, aircraft, buildings, luggage, open areas, people and even a route through the streets of central London? Only a detection dog. Detection dogs will be here for the foreseeable future and, all being well, Pip will be retiring in 2020, giving me a few years to look for her replacement.