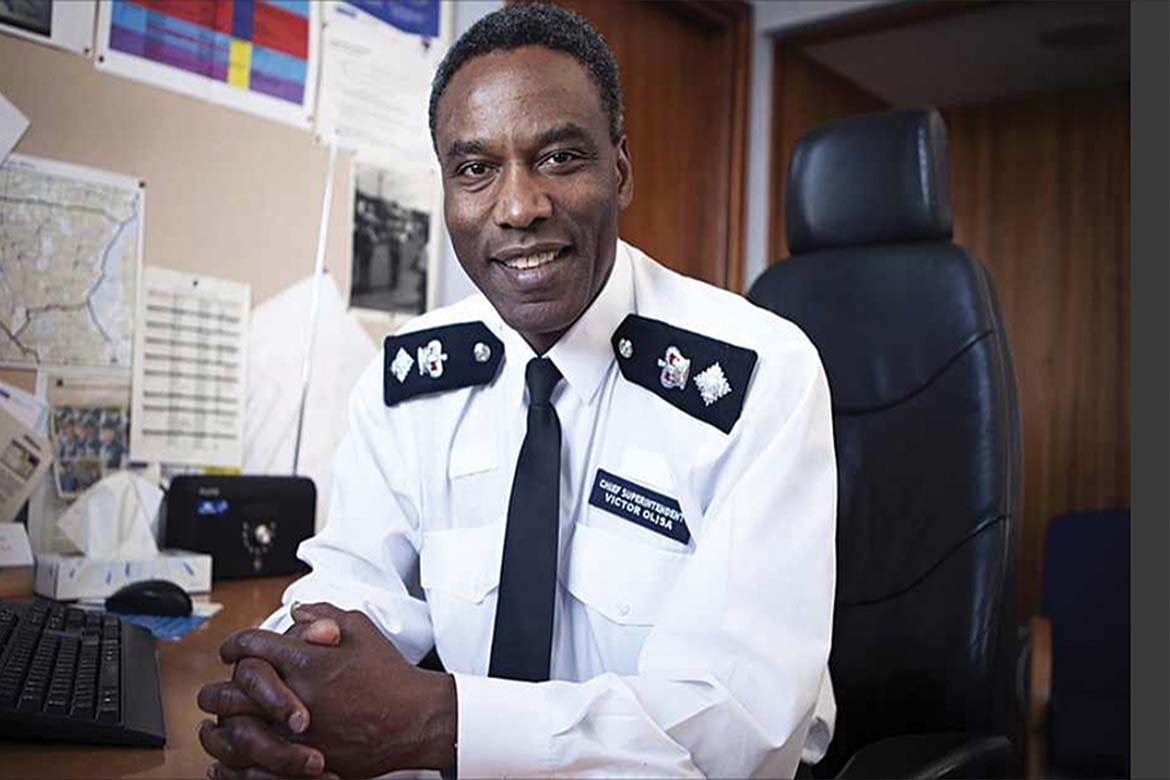 After a lead role in the BBC TV documentary “The Met: Policing London”, we caught up with Victor Olisa, Borough Commander at Haringey, to hear about the response to the programme, his career and approach, including the central part he played in reforming Stop and Search.

We found an officer with boundless enthusiasm and strong ideas about how to police this outer London borough with its inner city levels of criminality, population density and diversity.

For Victor, the key challenge for Haringey is how it is perceived. “The narrative about the place can synthesise into negativity, as an unpleasant place, not a good place to go.”  Certainly it is a borough of extremes in terms of wealth and social status from Tottenham to Highgate. “But there is a strong community feel here, people love it and identify with it. It is vibrant and diverse with some inspiring people.”

The good news is the billion-pound regeneration programme to transform the Tottenham High Road area that stretches from Seven Sisters to the rebuilding of the stadium for Tottenham Hotspur. “It will be the most modern and magnificent stadium in the country.” On top of this, Haringey is one of the Mayor’s housing zones. This will bring massive regeneration. “It is a huge opportunity and we should use it to enable widespread social regeneration, bring a greater level of ownership, enhance the pride and self-confidence of local people and to change the negative narrative of ‘outsiders’ about Tottenham.”

As part of a police career spanning more than thirty years across three forces, Victor spent 13 years in the City of London Police, which included the era of the IRA bombs of 1991 and 1992. “This led to great innovation, including what is today the Automatic Number Plate Reader (ANPR) and other Counter Terrorism initiatives.” He spent three years in the fraud squad. “This was brilliant work and my team was the first to make a million-pound seizure of cash.” During this time, Victor also carried out the fieldwork for his PhD in Criminology, interviewing 51 chief superintendents across 11 forces.

An area of policing that has been under close scrutiny is Stop and Search. During his time at the Home Office Criminal Justice Race Unit, Victor played a key role in reforming this. “We have seen tremendous change and improvement in the approach to stop and search. There is no doubt its use was disproportionate in the past, with the ratio of stops on black people to white people being 8:1, nationally. The approach must be based on outcomes, results and the quality of the interaction.”

Following his move to the Metropolitan Police, Victor was able to get involved at an operational level. In 2011, the newly arrived Commissioner wanted a radical review of Stop and Search and to achieve an outcome arrest rate of 20%. “Most boroughs are now reaching that target. I was in the right place at the right time to help effect the changes needed.”

Although the filming of The Met took nearly a year, it didn’t have a great impact on Victor’s day-to-day role. “The only times I noticed the film crew were when they plugged in the microphone and when the director would ask for something to be explained.” It covered a period of tension for the area, and the Met, including the outcome of the Inquest into Mark Duggan’s death. But, as tense as it looked, Victor says, “At the time, it actually felt worse than that; there were other difficult and complex matters to deal with as well as a lot of other day-to-day issues.” Overall, he felt it was a fair representation: inevitably the main outcome was to be good entertainment, but it also helped to bust apart the misapprehensions about the role of borough commander and, more broadly, the role of the police. “I think it had a significant impact internally; as borough commander people think you are detached – aloof. Lots of people have said thank you for showing what policing is about and showing that a borough commander does more than sit in an office.”

The episode showed the, sometimes difficult, relationship the Met has with the diverse community it serves. “For the first episode the director was trying to explore the impact of race and capture the emotional impact it has on the relationship between the police and the people of London and how it plays out in many areas of life. It was well edited and had a strong message.”

Indeed, one of the challenges for policing is to be truly representative of the community. Victor is pragmatic about the approach needed. “Encourage all members of the community to try policing as an occupation because it is a secure, relatively well paid job. It is easy to burden people with the idea of making a difference or being a role model for your community. If people are able to do that – fantastic; if not, they should just be left to do a great job.”

Policing is in the family with an uncle and grandfather who were in the Nigerian police. This gave Victor some insight into the challenges he may face. Although he had completed a degree in biochemistry, a career in policing looked a lot more exciting to the 22-year-old Victor, and he has not looked back.

As with many successful senior officers, there was a sergeant early in Victor’s career who made a big impact. “I have been really fortunate to have worked with some fantastic supervisors, including my first sergeant, in Guildford, who was brilliant: he was strict and supportive; taught me my trade – discipline, respect, knowledge. At the end of the shift he was always there, booked everyone off and asked about his or her shift. He made a massive first impression – and it goes with you and shapes the way you develop.”

When asked about the attributes needed to succeed in a career in policing, he summed up his approach: “Be open minded, prepared to learn, have self-confidence and self-belief, master your trade and it’s vital to enjoy what you do and get results.”