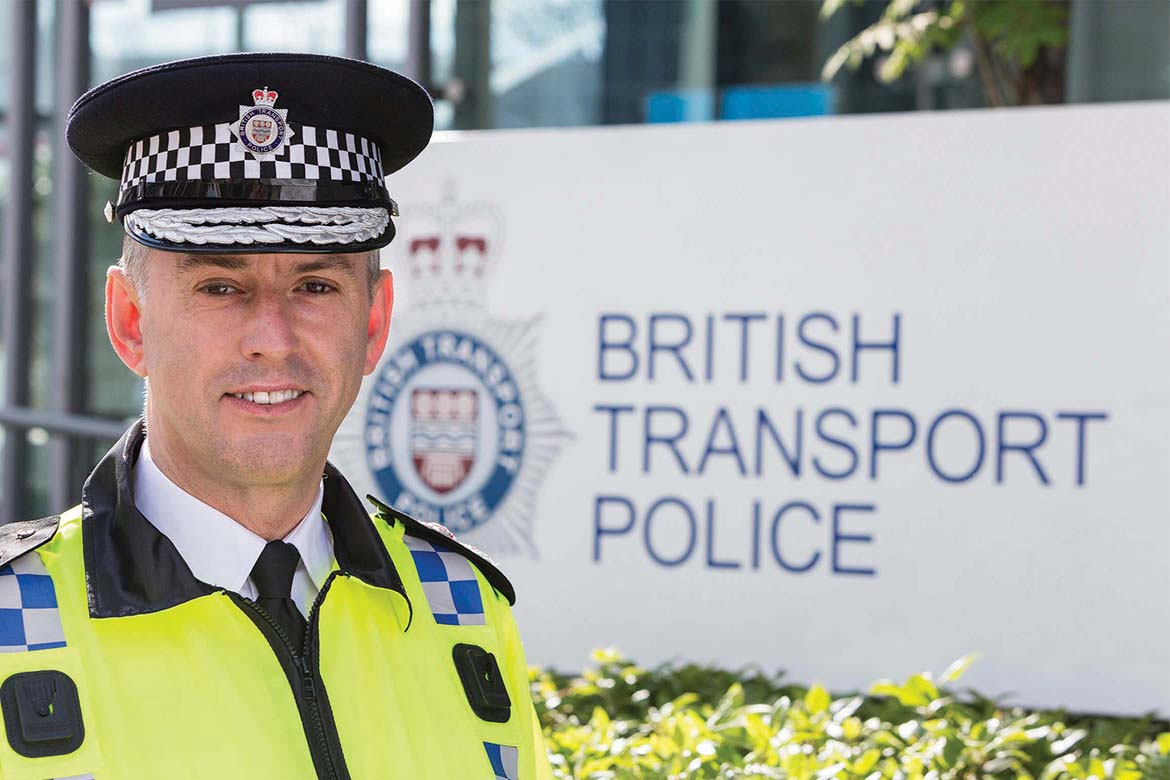 From protecting against terrorism, dealing with serious rail incidents and tackling football hooligans, to preventing suicides and investigating increasing reports of sexual offences, the challenges are many and varied for British Transport Police and its Chief Constable, Paul Crowther.

We met with this quietly-spoken chief officer, whose steely determination and eye for detail is helping lead BTP to deliver innovative and sophisticated approaches in all aspects of policing the national rail network, while keeping a grip on the business imperative to keep this vital part of the national infrastructure flowing.

In his 34 years at BTP, Paul has seen enormous changes, as it has grown in size, stature and professionalism. It is an organisation that is proud of its differences and specialisms, especially its commercial astuteness. “We have to identify the value in what we do and monetise it. Our stakeholders are business people, so we must be able to demonstrate the value of our work.” In common with other police forces, BTP is also being asked to increase efficiency and reduce costs. “We have already driven out considerable cost savings and driven down the unit cost of policing.”

Closely linked with this keen commercial awareness are BTP’s significant policing responsibilities across the entire rail network, including London Underground: its core function is to protect life and to reduce disruption caused by crime and other incidents.

As part of this critical role, BTP is doing a huge amount to combat terrorism.  “It is an open public transport network – impossible to have airport style security – so we must implement a range of measures and contingencies. New attack methodologies and capabilities continually emerge and our response is to develop multi-layered tactics and preventative initiatives.”

“We carry out extensive evaluation with skillful decision makers balancing risk. We can respond appropriately and avoid bringing the system to a standstill unnecessarily.”

Since early 2012, prior to the Olympics, BTP has deployed armed police officers at the busiest mainline railway stations. “First and foremost these are police officers, who just happen to be armed; they should still be engaging and accessible.” BTP constantly assesses the public reaction to armed officers. “Almost exclusively people find them reassuring. There was some consternation when they were first deployed, but now they have become routine.”

The customer is crucial to BTP. As part of crime prevention efforts, it aims to increase the confidence of passengers and staff. One particular blight was robbery. A new operating model has driven down robberies by 78% since 2004: it rarely happens now. In fact, currently there are only 16 crimes per 1 million journeys.

The new methodology involves long-term analysis – over 5 years – and then to deploy to hot spot locations over a consistent and controlled period. “We have seen an overall reduction in crime of 11%, with exceptional figures in some locations, such as a 31% reduction at Leeds mainline railway station.”

But BTP does not want to sit on its laurels. For the coming years, it has been set some challenging targets: 20% reduction in crime, 20% reduction in disruption, 10% increase in confidence – all by 2019.

Report it, Stop it

One initiative designed to increase confidence is focused on tackling sexual offences. BTP liaised with Transport for London, whose safety and security survey revealed that while one in 10 Londoners experienced unwanted sexual behaviour on public transport, more than 90 per cent did not report it to police. The resulting campaign encourages victims to report these incidents and sends clear messages to offenders that they will be caught.

An important part of Paul’s responsibilities is as National Police Lead for Suicide Prevention, a natural role given the particularly the high number of suicides (326) and attempted suicides (200+) across the network per year. “Railways attract vulnerable people – they can be seen as warm, light, safe havens.”

BTP is using the same problem solving techniques for suicides as other incidents. “We have a whole array of data about the groups of people likely to try to harm themselves, times of day and routes. Using these problem solving tactics has driven down suicide incidents. “By this point last year there were 935 life saving interventions, we are already over the 1,000 mark this year.”

A new approach to football hooligans

A sizeable minority of travelling football supporters continues to cause problems. “They invade carriages, behave in sexist, racist and homophobic ways.” As part of a new way to tackle this, BTP officers are wearing body-worn video cameras. This is a further initiative in partnership with the Behavioural   Insights team, which looked into what is driving bad behaviour. “A significant contribution was the anonymity of being away from home, the ‘what goes on tour, stays on tour’ mentality. With this technology, we can say, ‘you are not anonymous’. We have a rapid review team and social media team. Our mantra is, ‘Play up on Saturday and you’ll be in the cells by Thursday’. Your family and possibly your employer will know.”

Partnership working is incredibly important to BTP. “We work in a commercial environment, so we are naturally drawn to this way of working.” One example is the strong programme for Special Constables, sponsored by employers, with BTP leading the way. “We are aiming for 300 of our own support staff who are training to be Specials; this brings multiple benefits of giving them an insight into working on the frontline and gives us 300 extra people we can mobilise when needed.” In terms of wider partnership, BTP is a key player in Project Griffin, and Paul is a trustee of CSSC.

It is clear that Paul Crowther is immensely proud of the organisation he leads. “It has been the fulfillment of my career to become Chief; BTP is an outstanding organisation, full of innovative people.” And equally proud of policing, “This isn’t just a job, you have to believe in what you are doing and commit your life to it – it is truly vocational.”