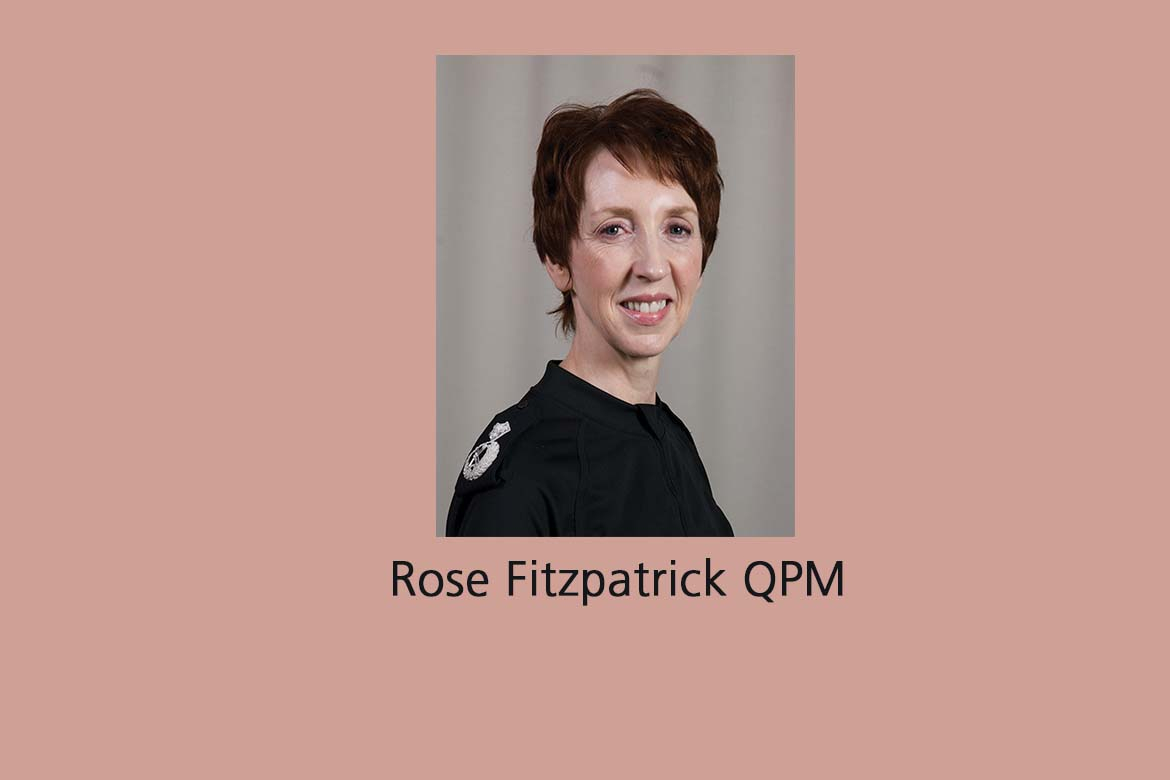 Rose Fitzpatrick QPM, Deputy Chief Constable of Police Scotland, is the most senior female police officer in Scotland, having been in post for over four years. In our recent interview with DCC Fitzpatrick, she shared the key learning from having been part of the senior team that led the transitional work for this new enterprise, talked about her early career and her approach to policing today.

Rose began her policing career with eleven years in the City of London Police, followed by fourteen years in the Metropolitan Police, where she achieved the rank of Deputy Assistant Commissioner.

She has fond memories of her time in the City, including the two years she spent on the beat as a Police Constable: “I learned to engage with the public, problem solve and work in a team.  There isn’t a day goes by that I don’t rely on that learning.” Equally, she benefitted from working in a relatively small organisation which treats people as individuals. “One of my aims in policing now is to remember that everyone who works for us is an individual with their own skills, hopes and aspirations.”

In the Metropolitan Police, Rose was the first female Borough Commander in London at Tower Hamlets. “There were some really stark differences.  On one side of the street was the business community alongside the City of London and on the other side were some extremely deprived areas and one of the largest Bangladeshi communities outside Bangladesh.”

Rose developed her understanding of local policing here and the need to build good relationships: “It really is about taking into account the local communities; the ethnicities; the geography; and to identify the needs of the community on a day-to-day level.”

Rose and her team were able to bring about some real improvements in the relationship between the police and young men from the Bangladeshi community with whom there had been a history of tension. “We needed to help them believe that the police were there for them. At that time, they would not come to us if they had been victimised. We worked really hard at improving relations. We got to the point where we were able to hold specific recruitment events for the Bangladeshi community with full support of the East London Mosque, followed up with buddy mentoring for young people. This stands out for me.”

So how did this senior police officer from London make the move to Scotland?

“Every so often in anyone’s career, a professional opportunity comes up that is pretty unique and is so great that you think, I want do that.” She was fascinated about the challenge of taking eight police forces and two policing organisations (Scottish Police Services Authority and Scottish Crime and Drug Enforcement Agency) and bringing them together into a single organisation: “There was a real sense of starting an enterprise together.” The fact that Rose’s husband is Scottish and they had always intended to live in Scotland further enhanced the opportunity.

There is quite a history of officers moving across Hadrian’s Wall and Rose says, “Scotland is a very welcoming country and I felt personally welcomed.” The transition was an interesting one, “Having spent all my policing career within the M25, the occupational hazard now is looking at mountains, instead of looking where I’m going!”

For Rose, it is a joy to police the variety that Scotland offers: “Stretching from as far north as Shetland, with a massive focus on energy and oils, right down to the Borders, which are incredibly rural and agricultural, to the Western Isles where you can look west across the Atlantic to the USA, to the east with Edinburgh, a world heritage site.”

She has found that Scotland is extremely proud of its police service, with a strong sense of connection between the service and the community. Rose told us about her police colleagues on the islands: “Their partners work in the local community, their children go to local schools, many of them volunteer with mountain rescue or in the coastguard, they are a very proud and resilient community.”

But Rose does not underplay the challenge of the transition. “I moved from a place where I had an effective professional network, I knew how things worked formally and informally, the culture of organisation.” She describes the resilience needed: “You need to be able to run a marathon, with the ability to sprint every now and then.”

Rose Fitzpatrick is responsible for all territorial local policing for Scotland and its population of 5.2 million people. Despite being a national service, the local delivery must be effective and engaged. Rose is proud of the balance achieved while recognising that, “not everything can be about the central belt: the corridor with Glasgow at one end and Edinburgh at the other”.

Rose explained how demands for policing are changing, with an increased amount of calls relating to vulnerability. “We get around 7,400 calls per day, 20-25% them (about 1,500) are crime driven. The rest are related to vulnerability. For example, 84 people are reported missing every day, many of these are elderly or frail, or related to dementia.”

Moving to a national police force

Police Scotland came into being on 1st April 2013 and Rose says, “During the last four years, we have been on an extraordinary journey together.” The development continues: “We have done the transitional, practical work and now operate in a consistent way.” She explained that the next stage is for the transformational work. “The exciting work is just beginning. Many organisations are at the same stage now, with the need to move to the next level to address austerity, cyber, globalisation, international challenges, terrorism and serious and organised crime, all requiring us to think in a very different way.”

The benefits of a national police force

The move to a national police force has brought many benefits, not least the ability to achieve a more consistent service, higher standards and equal access.

Rose explained how the structure brings many advantages: “In previous days, if there was a murder, for a small force this would involve a massive shift of local policing resource to support that investigation. Now we can carry on running local policing without moving resources and with more equitable access to specialist investigation teams.”

She shared a further example. “One year ago, there was significant flooding in some parts of Scotland. A Local Area Commander told me she had all the resources she needed within an hour, where it took two days previously.”

But the best advocates of the newly formed service are people who have experienced it and those who hold the service to account.

One example is the victim of domestic abuse.

“Previously, a woman victimised by a man who picks on vulnerable women and who moves between police areas would be difficult for legacy forces to tackle. Now we have a single database and a consistent approach to domestic abuse. It is a priority. We are extremely proactive in this area and look for previous and past partners with the aim of reducing harm. We have brought to justice several serial and long-term perpetrators. They are now in prison, serving long sentences. We can say without doubt that we have prevented domestic murders and serious sexual violence, because of this approach.”

Learnings for other organisations

We asked Rose to share some of the learning from the past four years that other organisations could benefit from. She began by focusing on planning: “Of course, at some point you must press the button and just get on with it, but time spent in planning is never wasted; if you can, double the time you spend on that. “ Second, she identified that

“Communication is critically important, both internal and external, you can’t do enough, telling people what is happening, what your intention is, how they can contribute and what you expect to happen next.” This includes celebrating success and Police Scotland focused on that in January with the Scottish Policing Excellence Awards.

The need to engage and involve people is a key area for Rose, as she explained: “If the case is sound, people will see it and will understand why it’s necessary.” Of course, a police force has many stakeholders to consider.  Not least national and local government. In Scotland, there was a clear political will which enabled legislation and change to take place. “We had national government support, including the commitment for Reform Funding.” Without these, it is unlikely the move to a national force would have come about.

As one of the most senior female police officers in the UK, and the most senior female officer in Scotland, Rose’s views on supporting women’s progression are clear. “We all have responsibility in this area. For me, it’s a little too obvious to say that it’s just an issue for senior women. I have a personal responsibility to help people up the ladder behind me. And I’m very lucky to work with a team of senior officers who believe it is just as much their responsibility too.”

Rose believes women have come a long way and should not forget the considerable progress made. The celebrations for the 100 years of Women in Policing in 2015 highlighted this progress, and one encounter, in particular. “I witnessed a woman from Falkirk, who many years before had to leave policing when she got married, speaking to a probationer constable who had been a teacher and was a mother with two children, who had just come into policing.” The difference in experience is clear.

Police Scotland innovates in its entry process for women and ethnic minorities. One such example is the removal of the requirement to hold a driving licence after learning that only 60% of women in Scotland have one. It was a barrier. Additionally, they are looking into the assessment centre, including the fitness test: “There are reliable alternatives to the dreaded bleep test. We need to go back to the principle of what is occupationally relevant; there are different standards of fitness required for different police jobs. We are looking at the best and latest research on how to properly assess people.”

Advice for the twenty-seven-year-old Rose

We finished our interview by asking Rose what advice she would give her 27-year-old self to best prepare for her policing career. “You’re here because of what you offer, you don’t have to become a different person. Learn to do your job, stretch yourself. But you are at your best when you are you, be yourself. And don’t over-prepare!”