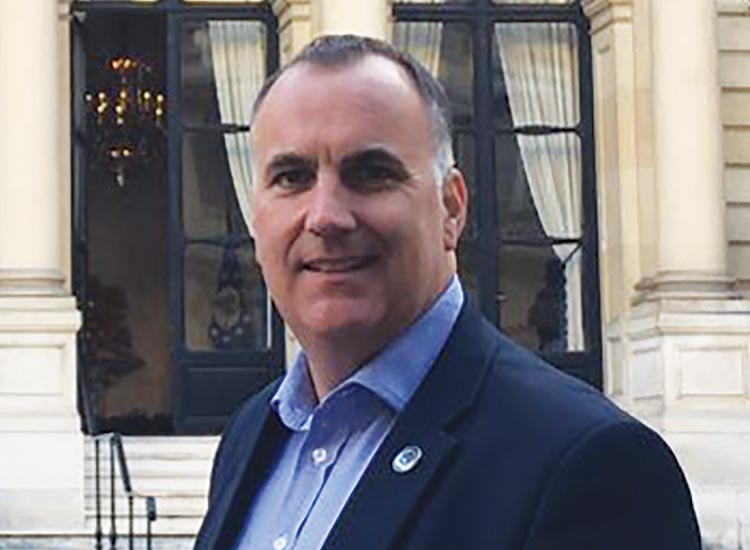 We met with Peter Lavery FSyI– the Chair of the Security Institute and City of London Crime Prevention Association committee member – to find out what makes him tick, his background, experience and his views on security, the Institute and his plans for taking it forward in the next three years.

Peter has an extensive background in security-related roles including 22 years in the British Army with the Royal Military Police and 11 years in corporate security.

His original aim at 16 was to join the police, but at the time, they were asking for more life experience than he had. He was a member of army cadets so decided to join the Royal Military Police and sign up for the regular police later. As it turned out, the diversity of opportunities within the RMP led him to stay for 22 years.

“The roles and responsibilities within the RMP are very similar to those of a normal police officer: community policing, intelligence, counter terrorism. You have the same legal training, follow the same laws of the land. Policing a garrison is very similar to policing a small town.”

His service included numerous roles including executive protection, CT security advisor and investigations. He deployed to many locations including Northern Ireland, Bosnia, Croatia, Beirut in Lebanon, Kinshasa in the Democratic Republic of the Congo (DRC) and three tours of Afghanistan.

Peter can also draw upon extensive corporate experience: After leaving the military, he joined De La Rue, who are responsible for the production of UK Sterling currency inside the Bank of England. He has held a number of senior risk and security roles including Director of Country Risk & Governance at Colt Technology Services, a multi-national telecommunications company and Regional Security Manager at Chicago Mercantile Exchange (CME) Group – a global markets company. His current role is EMEA Security & Business Continuity Manager at Cushman & Wakefield (a global commercial real estate services company).

These roles have given Peter a deep understanding of risk and security management and, in particular, an interest in counter terrorism and this remains a key focus for him. He has also developed an understanding of why he works within this field. “I am strongly motivated to do a good job and to keep people safe. It’s in the DNA of any service member or anyone working in security to protect people. Also, I am driven by working with other people with a similar passion for improving the situation and making things safer. You have to contribute otherwise you know everything will stay the same and we will not improve.”

An opportunity to give back

This strong drive to improve the situation has led to a long involvement in voluntary roles within the security sector. This began at De La Rue who asked Peter to represent them on a number of security and resilience related committees. He began by contributing to security standards around CVIT (cash and valuables in transit). He says: “The volunteering piece is where there’s an opportunity to give back.”

He is a board trustee on the CSSC (Cross-Sector Safety & Security Communications): “It is an amazing initiative that provides a free security communication service to business.”

He is a committee member of the City of London Crime Prevention Association “a highly regarded organisation which for many years has held monthly meetings to share police updates and crime prevention information, has supported important crime-related initiatives and been pivotal in CSSC, Project Griffin and City Security magazine.”

Peter believes his involvement in these roles outside of his day job enables him to have a wider perspective on issues and this is a direct benefit back to his employer.

“When you are involved with groups like the London Resilience Forum and their role in a co-ordinated multi-agency response to major incidents, be it terrorism, extreme weather, flooding or COVID-19 or Brexit, then you can take the experience back to your organisation, where that diversity of thought provides a lot of benefit back to the business.”

In particular, he outlined his reasons for his support of the Security Institute: “It’s an organisation that wants to effect change for the better; it wants to help further professionalise those in security and wants to contribute to standards.”

It’s clear from talking to Peter that he is a highly collaborative leader: “I have benefited from working with high performing teams throughout most of my career: military and corporate. Where this has not been the case and I’ve been in a position to influence or lead, I’ve developed them into a high performing team.”

He went on to say “I am a collaborative individual who is driven by working with other people that are similarly motivated to effect change. You may be the person in charge and ultimately responsible, but if you have good people around you who are subject matter experts in their particular fields: you need to listen to them. You may not always agree with them, but they will always bring in valuable perspectives.”

Role of the Security Institute

In January 2021, Peter Lavery FSyI became the new chair of the Security Institute, taking over from Professor Alison Wakefield PhD CSyP FSyI at the end of her three-year term.

Peter outlined three key strengths of the Security Institute for him: the membership, the education opportunities offered and the initiatives to drive development and improvements in societal security.  He discussed each of these further:

“A significant strength of the Security Institute is the membership: the breadth and quality of experience of those individuals is far ranging.”

He further explained: “The core of the membership are within the protective security realm; in physical security and personal security, looking after people and physical assets, but we also have many members who are cyber, information and technical security specialists. We all recognise that we want to be rounded security professionals, to have a good understanding across the security risks for whoever we are employed for; whether that’s the government, public, private or voluntary sector.

Our membership want a good understanding of a number of subjects and not just security. There’s plenty of people, me included, who have business continuity, resilience and crisis management as part of our normal day jobs.”

We discussed education provided by the Institute: “We offer the opportunity to engage in many ways: our website, our chat rooms or in special interest groups, at our physical events when we can and, at the moment, virtual events almost on a weekly basis. If you are looking to develop, perhaps for a new role, or studying for a security qualification, we have something for you. As well as this, the Institute freely allows people that are non-members to use its CPD programme and to be able to evidence their CPD.”

In terms of developing societal security, the Institute conceived and instigated the UK Security Commonwealth with Emma Shaw as the first Chair. The UK Security Commonwealth are some forty-two organisations which collaborate on major issues: “As the largest professional membership body in the UK for security practitioners, we liaise with our sister organisations to help contribute and give back to society.”

Goals for the security sector

So how can the Security Institute, with Peter at its helm, encourage the security sector to continue to evolve? In his view, the pandemic is an opportunity for the sector to show its worth: its ability to support and protect the wider public. But he is clear that improving perceptions remains a priority: “Despite the government recognising security officers as key workers, this is not necessarily recognised by the public. Security officers are on every street and in many incidents will be the first people to react and protect the public.” In response to this, last year the Security Institute in partnership with the BSIA and the Security Commonwealth joined forces to run an awareness campaign to highlight the essential role that security officers play in public life, and to increase respect and recognition for their capabilities.

For Peter important changes to protective security are imminent: “We are at a pivotal moment for security in this country. The Manchester Arena attack in 2017 and the current public inquiry will most likely be a catalyst for legislative change for the security sector around protective security.” This legislation, prompted by the Martyn’s Law campaign, will place new Protect Duty requirements on owners and operators of ‘publicly accessible locations’. Peter believes it will allow for meaningful consultation and an opportunity to better protect UK citizens. “We will see new legislation which will enhance the role of the security sector and especially security officers on the frontline. Once in law, it could be an enabler to raising standards and awareness.” It could impact other factors such as pay. “Security officers are effectively on a minimum wage and we want to see the living wage as a minimum. We hope over time that businesses will more fully recognise the key role that security officers are playing.”

This new legislation will mean changes for local authorities and security services and how they interact with the security sector to protect publicly accessible spaces: “Collaboration clearly does happen, but perhaps not as uniformly as it should and the legislation is likely to lay down some requirements to ensure this.”

The Security Institute is a champion for diversity and inclusivity in security, having launched an Inclusive Security Special Interest Group last year to help promote positive change within the sector. Peter says: “We all recognise in the industry that there’s more that can be done to attract the best people and value different backgrounds and experiences. Through the SIG, we will be launching a campaign called #OurSecurity this year to get the conversation going more actively across our profession.” The Institute is also asking corporate partners to share their diversity and inclusion policies to demonstrate their commitments and serve as role models to other organisations.

Some vital lessons learnt from the pandemic are wellbeing and resilience: “Many people are working at home sometimes leading to feelings of isolation and anxiety. Conversely security officers are working as normal without the usual interactions but have to remain alert and motivated while by themselves for long periods of time”. Peter acknowledged that both these scenarios are putting pressure on individuals: “We have to double down on what we can do around wellbeing. On a positive note, I’ve seen lots of businesses more than go that extra mile to look after their people.”

Given Peter’s challenging job and voluntary roles, how does he look after his own wellbeing? “My two top priorities are clear: my family and the day job.  Having a very supportive partner is critical and this year my wife and I will be celebrating our 25th wedding anniversary.”

Peter also described the importance of supportive colleagues who continue to provide essential advice and support: “Throughout your career, there’s always a number of people along the way who guide you and give you counsel. There are certain significant individuals who really help you on your path, inspire you and give you opportunities to contribute.”

It is clear that Peter Lavery is an exceptionally experienced, personable and collaborative professional who is highly motivated to drive development and improvement within the security sector. With him as Chair, the Security Institute has a bright three years ahead.

Read previous articles from the Security Institute, City of London Crime Prevention Association and updates on the CSSC in our Police and Partnerships category.