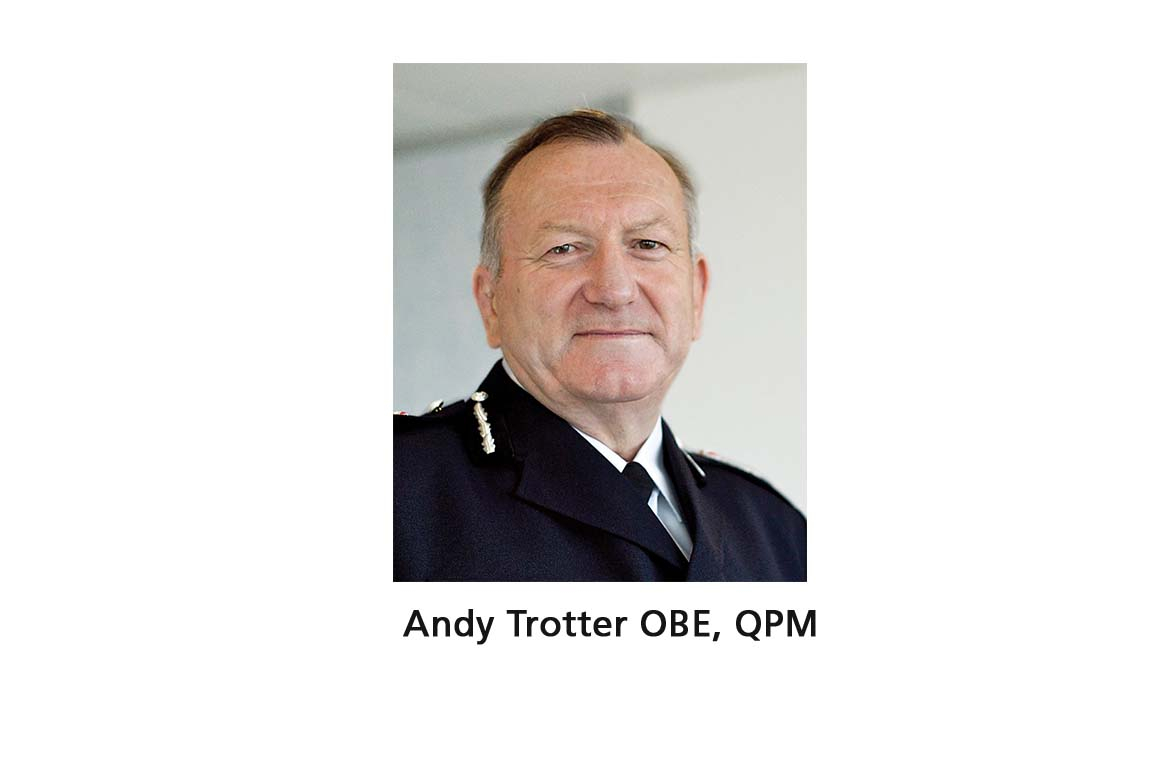 Leading a 4,200 work force responsible for policing the railways of England, Scotland and Wales, Chief Constable Andy Trotter OBE, QPM, needs broad shoulders. We met with him at British Transport Police’s (BTP) Head Office in Camden, to discuss his approach to crime and counter terrorism and his views on the security industry.

What comes over immediately is that Andy is someone who likes to lead and to keep a strong grip on business. He says, “every organisation needs a driver, really clear goals, and I am very clear want I want to do here”. His approach to policing is positive, “With the right energy, drive and enthusiasm, as a rural bobby or running a large police force, we can make a difference.”

With around 2,800 officers and 1,400 support staff, covering the British rail network and the London Underground, BTP’s priorities are similar to any other police force. “Policing is Policing,” says Andy, but with a couple of significant added complexities. BTP is not funded by the Home Office, but by the rail operators, so Andy explained his challenge is to provide public sector policing in a private sector environment, on a vital part of Britain’s infrastructure.

This, of course, means Andy has officers from Inverness to Truro. “We deal with every other police force in England, Wales and Scotland, with every Crown Prosecutor and every Procurator Fiscal.” BTP are involved in every aspect of British policing and the majority of national events, including the Olympics, in which BTP played a major part.

A key difference for BTP as a police force is the number of fatalities they deal with. They strive to handle these carefully, with dignity and empathy, but also, crucially, swiftly. “In contrast to motorways, our clear-up target is 90 minutes, start to finish, remembering it could be a crime, so proper investigation, proper evaluation, at speed is essential.” They are acutely aware that delays can cause huge distress to thousands of people up and down the country who are relying on the railway system.

Another key challenge is travelling football fans and, although, the vast majority are peaceful, Andy points out, “We can’t ignore the significant number who do misbehave; set piece battles are rare, but general bad behaviour can be very intimidating.” There is no levy on the football clubs and Andy estimates it costs BTP £2.4m to police travelling football fans. It is a complex responsibility, “We can’t be at every location, but we use good intelligence, good planning and flexibility, predicting what may occur.”

Their approach is not confrontational, being firm and fair when intervening, but it is a major challenge, with many officers on their own on trains, a long way between stations.

BTP are also the national lead on metal theft, including cable theft. They have brought together a number of agencies, not only police forces, and seen a dramatic fall in this crime. For example, live cable theft incidents have declined by 55% from April 2012 to January 2013.

Counter terrorism is a key priority for BTP and they are involved at every level of planning and response. Of course, the very nature of trains and tubes means they are crowded places. “But the system must run, Britain must go about its business; the safest rail system is one that does not go, but that is not an option.”

Andy believes that dealing with terrorism is a part of continuum; you create a prickly environment for all types of crime, for bag thieves, for indecent assault, for the terrorist.

“If you are an alert officer, you know your people, the railway staff, the shop keepers, you know how people generally behave, and our experienced officers can pick out unusual behaviour.”

A key part of BTP’s approach is their own behaviour and how front-line officers intervene. “We are very strong on how we behave, we are polite and helpful, we look after people, protect them, carry buggies up stairs.” The training of front-line staff is another crucial aspect of their approach to terrorism. London Underground has invested significantly in training on staff alertness, including how to control a platform and how to identify a suspect package. “There are many, many suitcases on the Underground every day; the fact that someone has left one, does not make it suspicious.”

We also discussed Andy’s views on the private security world. “We have seen very positive developments in private security; it has become a very strong player.” He believes this is a result of not just legislative changes, but the self-imposed discipline of industry.

Philosophically, Andy has no problem with a bigger role for private sector in policing. In his own area, he believes the private sector has taken some of the weight off the police. “They are well organised, well regulated and flexible. We carry out combined operations and share intelligence and are happy to do so.”

He is an enthusiast for outsourcing the regular and routine functions. But he takes a cautious approach, “I like a good deal, but I don’t want to be first in this arena; I want to see what succeeds and what difficulties arise.” He adds, “if they can find efficiencies, then so can I”.

He wants to be an intelligent customer, “We are in business too and we want a good deal. I’m looking for public sector ethos, with private sector mindset.”

He has clearly relished all his roles. “I like being in charge, making a tangible difference, from being a rural sergeant in Kent, Divisional Commander at Plumstead, Deputy Assistant Commissioner in Westminster and here.” And with his six children and seven grandchildren, there is never a dull moment!