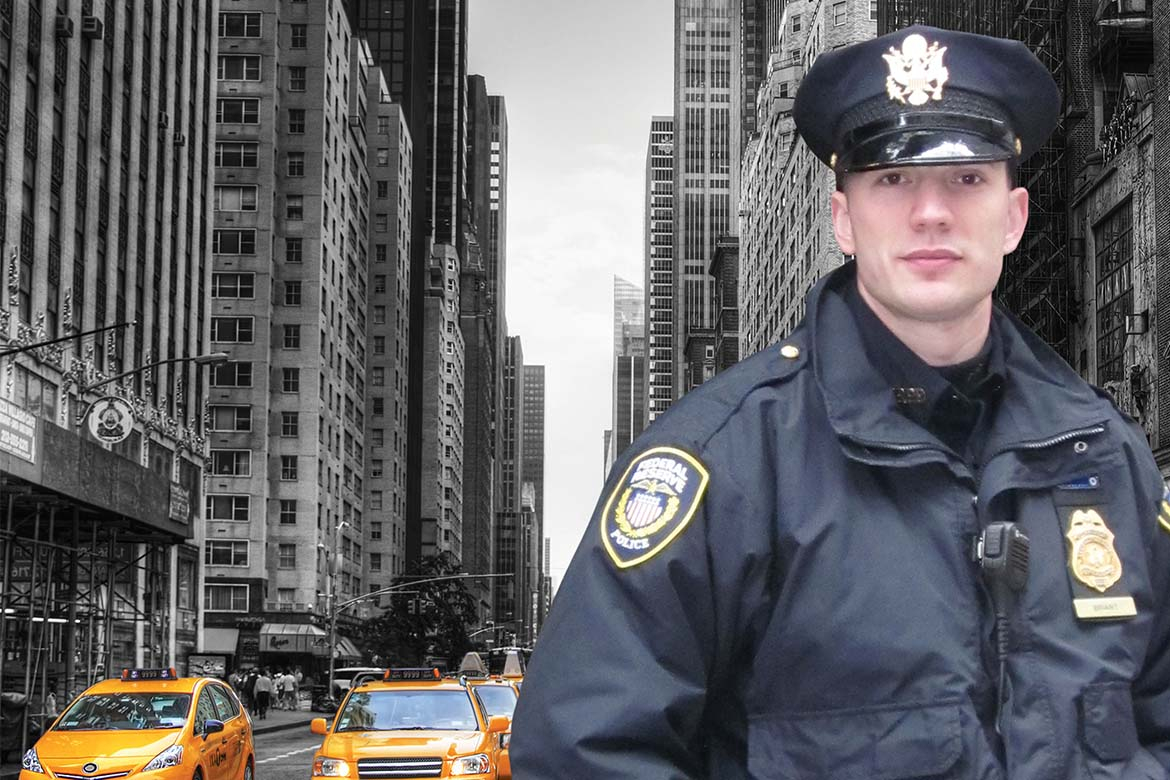 Standing guard outside the garage at the New York Fed one Tuesday afternoon, Officer Chas Briant is a long way from home. More than 3000 miles, in fact.

Briant is one of 13 cadets to graduate from the Fed’s Police Academy this year. But while most of his peers came to the Fed from law enforcement units located within the area, Briant began his journey patrolling the streets of London for the UK’s Metropolitan Police. He would still be there, too, if it weren’t for a chance encounter with a woman who would one day become his wife.

“Everyone refers to our relationship as something out of a movie,” said Kelly Briant recently. “That’s exactly what it’s like.”

The two met overseas at an indoor soccer tournament in 2009. The way Briant tells it, he was out celebrating after a game.

“As Englishmen do, we were out having fun,” he said. “We were trying to find our way home, but took a wrong turn. When we heard American accents, we decided to explore.”

Briant and his teammates soon came upon the American team’s living quarters and began making friends. It didn’t take long for him to win over Kelly’s heart. “It was like we knew each other our whole lives,” she said.

The two kept in touch in the months that followed and ran into each other again at the same soccer tournament a year later. Several months later, Kelly asked Briant to come to New York. And much to her surprise, he did, leaving behind a seven year career at the Metropolitan Police.

“Chas was extremely excited before coming to the United States,” said Clive Taylor, a constable in the Metropolitan Police. “Especially as he was going to be living with a beautiful girl, Kelly, that he had fallen madly in love with.”  Moving to New York City wasn’t easy, though. The Brixton native says at first he had difficulty adjusting to the pace of life here and would often get confused walking around. To make things worse, he had no job.  Briant was forced to work stints as a doorman in lower Manhattan and at a Midtown pharmacy to make ends meet.

Enrolling at the Fed’s Police Academy

“It was a huge change from being an officer to selling candy, but I was just pleased to have a job,” he said.  But the job Briant wanted was one in law enforcement. And after a few dead ends, he came to learn about the police force at the New York Fed.

After a rigorous application and screening process, Briant got the call he was waiting for.

“He was excited to go to another police academy and experience the camaraderie that comes with it,” Kelly said. “All he wanted to do was be a cop.”

Like all recruits, Briant was instructed in U.S. law surrounding the Fourth and Fifth Amendments, and had to undergo a rigorous nine week program that included training in firearms, defensive tactics, anti-terrorism, and first aid. Candidates also endure various physical fitness tests. In one, Briant set the Bank record with 137 consecutive pushups.

“He was really an exceptional recruit,” said Sergeant Miles Hallett, who oversees the Fed’s Police Academy.

If Briant was up to the task physically, he might not have been completely ready for Fed police duty. “The biggest difference is looking down at your hip and seeing a gun,” he said, referring to his time as an unarmed Metropolitan Police officer. “It was a huge change for me.”