Senior security officers look ahead to 2013 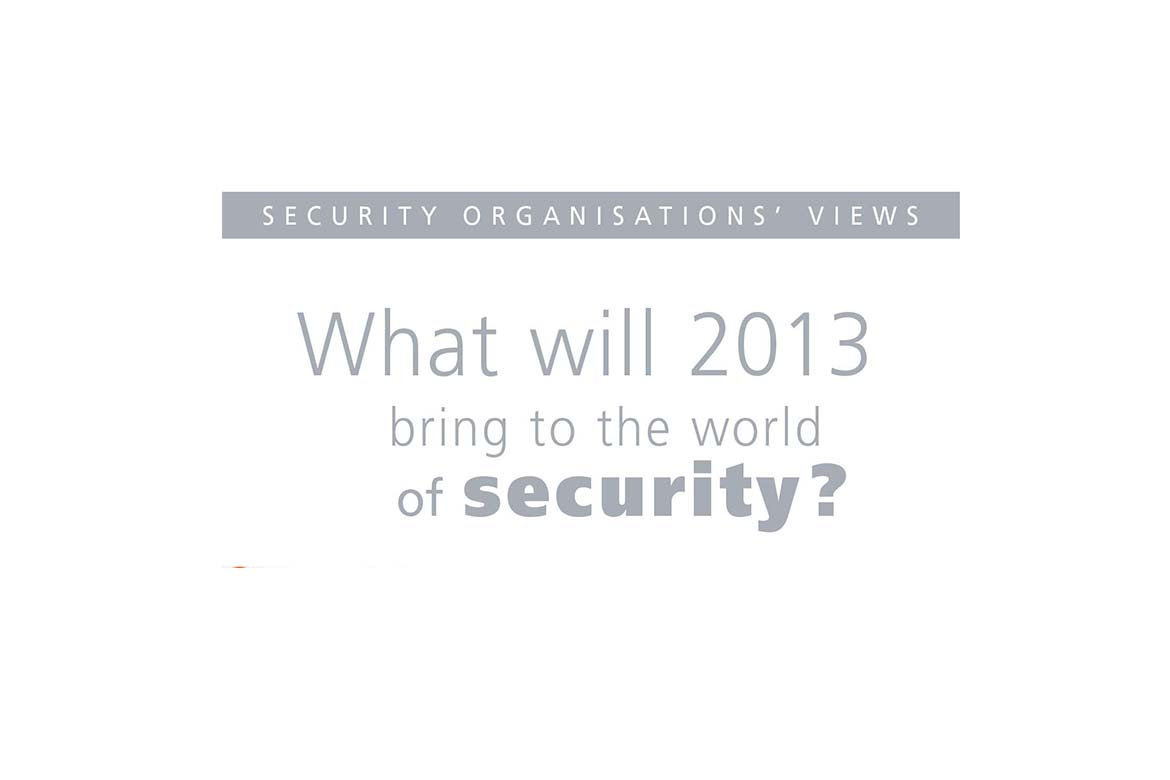 What will 2013 bring to the world of security?

We asked the following senior thought leaders from security organisations for their views on the challenges and opportunities for the security sector in 2013:

2012 was probably the most demanding in Policing and Preventative terms for a long time, the aftermath of the August 2011 disturbances, the Queen’s Diamond Jubilee, the Olympics plus the ever increasing threat from cyber crime added to our business-as- usual society crime related issues. Well done everyone for getting us through this period and placing us in a strong position to deal with all that 2013 may throw at us.

The creation of CSSC (Cross-sector Safety and Security Communications project), maximising on already established partnerships, Project Griffin to name but one of many, was both a success and a pathway for the future.

There are no boundaries, local, national and international where this can’t go. It is yet another example where the City of London Crime Prevention Association has aligned itself to a preventative initiative which is both interoperable and internationally transferable. The CoLCPA and City Security magazine are proud to be engaged in the future of this unique initiative.

The decision to distribute the magazine on a national basis was clearly right and we hope you find it beneficial and thank you for your continued support.

I am confident that we in the private sector can support our Law Enforcement colleagues and our communities in any challenges we may face going forward.

The constantly evolving world of technology ensures the world never stands still. Policing is no exception to this rule. In 2012 the City of London Police has been at the forefront of the national response to cyber crime, with the National Fraud Intelligence Bureau handling tens of thousands of reports of internet-enabled fraud. The force is also working beyond our shores to confront what is fast emerging as a major threat to global societies, with our Economic Crime Directorate now part of an international law enforcement / government / private sector alliance working to improve cyber security.

The challenge for cyber policing in 2013 is to continue to get to grips with the devils we know whilst accepting and expecting to come face-to-face with the devils we don’t. It is also about understanding how technology which is being exploited by the criminals – social media, smart phones, cloud computing – can be put to good work by law enforcement. Businesses have a role to play in this as well.

A major priority for me, as always, is to keep the City safe for businesses and residents.

Our security partners continue to play a vital role and I look forward to building on that relationship in 2013, and to contribute towards making City offices an better place to do business.

Keeping company and personal data secure may require the investment of extra time and cost the organisation additional money, but this is a very small price to pay to keep cyber criminals out.

Our main focus will remain the protection of the public – that is first and foremost what the SIA is about. In doing that we will be working towards: a new focus on business licensing; ensuring that there are standards for fit and proper businesses across the industry; and improving the way we deliver our services – making them more accessible and straightforward for those working in the industry.

The Home Office has launched proposals for a new regulatory regime for the UK’s private security industry, which will be subject to final approval from ministers. We encourage all enforcement partners, security suppliers, security buyers and front line staff to give their views on how the industry should develop. The consultation paper is available on the Home Office website: www.homeoffice.gov.uk/publications/about-us/consultations/private-security-regulation/ and closes on 15 January 2013.

A famous Chinese curse says ‘May you live in interesting times’. 2013 will be interesting. At the strategic level, the Middle East will continue to boil with all its inherent broader security implications. We should not be complacent after the success of the Olympic Games and we must keep our guard up.

Operationally, I do fear that austerity measures will begin to bite visibly next year. Crime rates, having been declining, may start to rise as reductions hit home and fewer police officers and resources are available to provide security. Tactically, there will be no better time to fit an intruder alarm and use all the latest technologies to improve the security of homes and businesses.

NSI’s priority will be re-engagement with insurers and an emphasis on the value of standards and certified company solutions.

I hope to see a new industry owned hallmark of quality emerge as we transition to the future regulatory regime.

As an academic, my best gauge of security trends is the admissions to our security related courses. We are experiencing growing university applications, and an apparent lowering of the average applicant age with more frontline security officers in their 20s joining our bachelor’s degree, a pleasing step towards private security becoming a first choice career among the young. We are seeing more serving police and military personnel with a few years’ service still remaining thinking ahead to future private security careers by undertaking a degree. Finally, I am pleased to note a small but growing number of senior practitioners coming to us to extend their education to professional doctorates.

I believe these trends reflect not only the tougher economic climate and increasingly competitive job market, but also an improving image of security as an interesting and diverse career area with progression opportunities, and the fact that security work is becoming more complex, wide ranging and intellectually engaging.

On the emerging trends in security, key challenges and opportunities for the New Year… Security is emerging as a profession but just like many other emerging professions, there are too many conferences, too many certificates and awards and vested interests and there is a danger of diluting the message.

What will be the major threats to protect against? In my opinion the greatest threat to businesses will be Cyber and the “insider” who in most cases goes undetected, remaining below the radar until such time they get greedy and/or make a mistake.

How do you think the economic climate will affect the security world? Security has always been seen as a below bottom line expense and in particular Contract Guarding will always be the first area to be targeted when cuts are made. With fewer funds it will be more important to get the business cases right and don’t forget to put the intangibles on the balance sheet.

What are your priorities for 2013?

ASIS UK will be concentrating on providing value for money for its members and driving hard to rationalise and amalgamate the academia contribution to the professionalism of the security industry.

A positive trend to have emerged over the last couple of years is the increased professionalism within the security industry thanks to credentials such as the Security Institute’s Chartered Security Professional designation. This will continue throughout 2013.

The major threats to national security will still be from terrorism and organised crime, whilst antisocial behaviour will continue to impact on our daily lives. The reduction in police numbers will exacerbate these threats and make the role of private security operations more important. Radical Islamists such as al-Qaeda will continue to pose a danger both globally and here in the UK, while organisations such as the English Defence League and the Occupy movement will need to be closely monitored.

We noticed that during 2012 security budgets were cut – a trend likely to continue during the coming year. This means that organisations are going to have to work leaner and smarter to protect their people and property via a combination of manned guarding, state-of-the-art technology such as video analytics and HD cameras, and remote monitoring.

As the 2012 London Olympics fade in the memory and the reality of the Government’s announcement in 2010 of a “phased transition to a new regulatory regime” starts to become more of a reality, the contract manned guarding sector of the industry reaches a crossroads.

I believe strongly that the voluntary Approved Contractor Scheme has been a success and the real proof of this is that it has at least 725 member companies. The ACS gives us, for the first time, a benchmark with which to compare the performance of one company against another. There is still room for improvement and we should always need to know, for example, that a member’s annual inspection score is automatically adjusted to take account of any poor performance which has occurred. The industry needs to stick with an improved version of the ACS and not just try and make changes for changes’ sake.

The further shaping and refinement of a new regulatory regime for the UK’s private security industry is one of the key developments expected for our sector in 2013.

Recently, the British Security Industry Association has welcomed the Home Office’s release of a consultation document, which seeks the industry’s views on the proposed new regulatory regime, which encompasses a new scheme of business licensing. This is a long-awaited development in the transition process, as the industry has previously reached agreement with the Security Industry Authority on many aspects of the future regulatory regime.

The BSIA is anxious not to lose the momentum it has achieved through its involvement in the Security Regulation Alliance. The Association is in the process of consulting its members on this pivotal set of proposals, and will be seeking further clarity in 2013 with regards to identifying the Government’s proposed timescale for the scheduling of the requisite primary legislation.