Russian invasion of Ukraine – likely to continue through 2023 and beyond 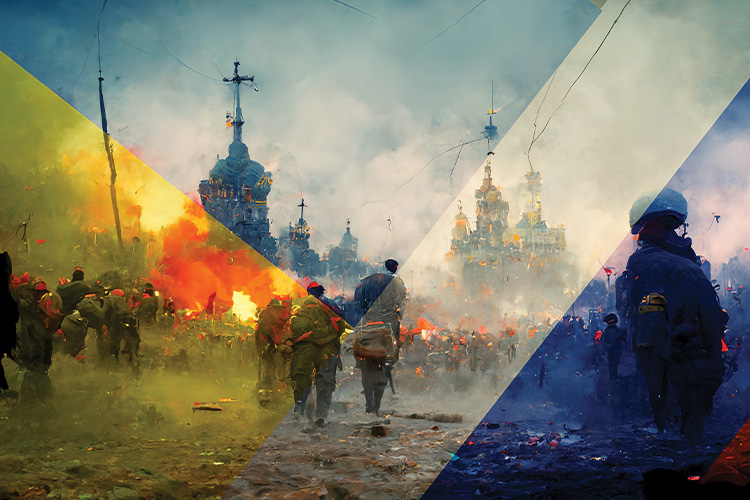 Russian invasion of Ukraine – likely to continue through 2023 and beyond

The Russian invasion of Ukraine began in February 2022 and is likely to continue into 2023 and beyond. Here Philip Ingram, who had a long and senior career in British Military Intelligence, reviews the conflict to date and provides his insights into what might happen next.

Putin’s aim when he started his Special Military Operation in February was to topple the increasingly West-leaning Zelensky government. His secondary aim was to open a land bridge between Crimea, annexed in 2014, and Russia, via what has become known as the disputed Donbas Region.

With vastly superior troop numbers on paper, and different command structures, Putin launched his attacks and plucky Ukraine, war- hardened by eight years of fighting Russian backed separatists in the east and emboldened by Western training and weapons such as the UK’s NLAW anti-tank missile, defended.

Militarily, Russia was found wanting: their command and control was poor, their equipment unreliable, logistics and troop motivation close to non-existent. Their ability to conduct what are known as combined arms operations, fighting tanks, infantry, artillery, and airpower together, proved impossible, embarrassing many western analysts but embarrassing the Russian military and political leaderships more.

Ukraine defended its capital and government, giving ground in the east and south, trading space for time, and it used that time to defeat Russia’s main effort of capturing Kyiv. Ukraine continued to defend, forcing the Russians to pay a high price in equipment and personnel for every village captured in the south and east.

Ukraine used the time they gained to plan their counter offensives, to train on and deploy new western equipment, including longer- range NATO 155mm artillery and, of course, the infamous HIMARS missile systems.  Ukraine knew the Russian weak points, their logistic bases and their command headquarters and put the HIMARS missiles to good use destroying those whilst preparing their counter offensives.

Be under no illusion, Russia has lost every objective it has set itself in the conflict so far, and Putin is quickly trying to change his goalposts for something he can label

In late summer, Ukraine launched an attack towards Kherson in the south, using social media to suggest this was the expected main counter offensive. Russia rushed to reinforce its positions there, the bluff worked, and Ukraine launched its main attacks further north towards Kharkiv, recapturing 3,000 sq km in days, when it took the Russians months to gain the same territory.

The Ukrainian counter offensive has switched back to the Kherson area in the south as troops in the north secure the re-captured ground and wait their next move.

Putin’s response was to deliver the referendum on Kherson, Donetsk, Luhansk and Zaporizhzhia joining Russia, with his pre-decided results, to mobilise 300,000 reservists and increase the economic war on the West by blowing up the NordStream 1 and 2 Gas pipelines. At the same time, he increased his nuclear threat rhetoric, hoping he could hold what he had till winter, allowing the 300,000 to be trained and equipped and deployed, but to what effect? Ukraine has already defeated Russia’s best units and troops; the reservists are merely more lambs to the slaughter.

He is pinning his hopes on Western support dissolving over a fuel crisis-filled winter in Europe with a nuclear threat hanging over the world. However, China and India have warned him to be careful. They still want Russian gas and oil but also want to keep some relationship with the West.

Underpinning where we are is the fact that Ukraine has the initiative on the ground and is giving the world a masterclass in combined arms operations. It will likely push the Russians much further back before winter sets in, recapturing more territory, further embarrassing Putin and stimulating unrest in Russia.

The issue with winter is three-fold. First, in the run up to winter the ground gets soft, making the use of armoured vehicles off road difficult and therefore favouring defensive operations (the Russians).

Second, the cold and its impact on less reliable military equipment, on personnel and morale, favouring those with the initiative (the Ukrainians); and third, the impact on an increasingly power-sapped Ukrainian people, as he targets power infrastructure. However, Ukrainian preparation and national resolve could triumph.

Putin, increasingly isolated, could then decide to use a tactical nuclear device, (not that any nuclear device is tactical in its effects outside the battlefield). He could try to send a message, ‘Negotiate and accept what I have captured, else the next one is on Kyiv, or Kherson.’ If he did, international condemnation would have to include China and India, for their sakes, and his isolation would be complete.

NATO and the West’s response would probably be conventional and against Russian troops in Ukraine, but once a foot has been placed on the nuclear escalation ladder, it can be climbed very quickly. We are entering the most dangerous phase of Putin’s folly.

However, there is much more for Ukraine to do before that decision point is reached and it is probable we will see the conflict continuing through 2023 and possibly beyond. Putin’s increasingly aggressive rhetoric and economic war against the international community will continue to escalate.