Hurricane Sandy in the Big Apple 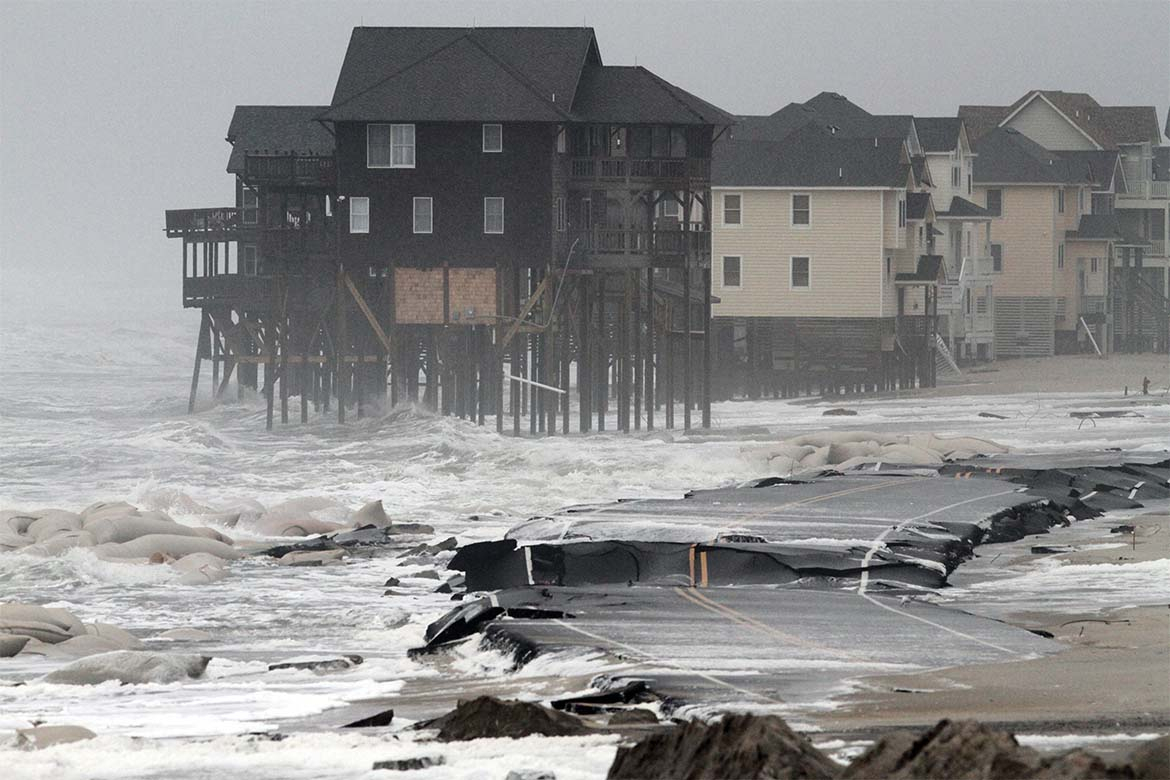 How U.S.’s largest coastal city survived the superstorm of the century.

In October 2012, Hurricane Sandy, a 1,000-mile wide massive extra-tropical storm, unleashed its fury on the east coast of the United States and centered much of its anger and impact on New York City.

It was unlike any other storm in the city’s history, and tragically 43 New Yorkers lost their lives.

This storm was the product of a confluence of weather elements that resulted in a worst-case scenario for the City. Sandy’s arrival coincided with a full moon that gave rise to astronomical high tides, and its path was altered when it collided with a second weather front that caused it to turn towards New Jersey, putting the city on the northeastern side of its winds. These factors led to the massive surge that hit many beachfront neighborhoods.

Water levels at Manhattan’s southernmost tip, the Battery, reached an unprecedented 13.88 feet – a scenario that the U.S. Federal Emergency Management Agency (FEMA) estimated had a less-than-one-percent chance of happening.

By the U.S. National Weather Service’s (NWS) forecasts, Sandy was expected to be a strong Nor’easter, a classic Northeast winter storm, with surge levels approximating that of Hurricane Irene, which averaged about four to eight feet. The forecast characterized the surge as a piling of water building slowly over a predicted 24-hour period as opposed to a strong surge with rapid inundation of water that typically characterizes hurricane storm surge along the U.S. coastline. In reality, Sandy contained both the relentless piling of water typical of the Nor’easter and the surge of a strong Category 1 hurricane.

Just after low tide ocean water reaches up to the damaged section of NC 12 just north of the Mirlo Beach area of Rodanthe on Hatteras Island on Monday, Nov. 19, 2012. The road was damaged by storm surge from Hurricane Sandy. A temporary sand road was built to the west of the right of way, passable only by four wheel drive vehicles. Access to that stretch of sand road was closed to all traffic intermittently due to ocean overwash.

To be sure, New York City has faced many major emergencies and even life-changing events, but the city has never experienced in modern times an event that damaged so many areas and impacted so many residents. Each phase of response and current recovery has taken a massive and coordinated effort.  Sandy taught us that response and recovery from a super storm required the City’s response to get big enough fast enough to handle the myriad issues we faced – almost all of which arrived at the same time as Sandy did. This necessitated the City having in place the task forces, agencies, space and structures long before Sandy’s arrival to deal with the critical issues in the aftermath of the storm, including dewatering, power restoration, debris removal and residential support.

Preparing for the worst

As Commissioner of the New York City Office of Emergency Management I am paid to be a pessimist. I look to the worst-case scenarios and plan for them. And plan we did. Preparations for this storm did not start the week before Sandy arrived; they started in the wake of Hurricane Katrina which devastated the City of New Orleans in 2005. NYC OEM studied the reports and analyses of Katrina and built the largest and most operational coastal storm plan in the country. In 2007 OEM issued the NYC Coastal Storm Plan. This detailed plan is really a series of plans that guides the City’s storm tracking and decision making, response and recovery from the hazards that large scale coastal storms, like hurricanes, bring.  The plan is “operational” because it addresses not just what we need to do, but how we get it done.

The decision to activate the Coastal Storm Plan was made by the Mayor at executive-level briefings first at City Hall and then at OEM headquarters in Brooklyn. As Sandy approached, each of the plan’s component parts were activated – from evacuation considerations for the general population to health care facilities to sheltering to recovery efforts including task forces centered on downed trees, debris, power restoration and the care and feeding of our residents. This plan guided New York City through a very difficult period: evacuations were ordered for more than 370,000 residents across many coastal communities and 65 evacuation centers and 75 shelters were opened, supplied and staffed.

Certainly, life-safety was the first and foremost priority before and after the storm. Thirty-six hospitals, nursing homes and adult care facilities were evacuated and patients and residents relocated. Post-Sandy, the Police and Fire Departments initiated aggressive search, rescue and security operations. Further supporting our efforts, Urban Search and Rescue Teams conducted door-to-door searches of 30,000 homes in impacted areas before switching to an unprecedented humanitarian mission. Our federal partners, our communities and many others joined with us to execute the operation.

The storm surge and high winds led to an enormous loss of power across the five boroughs of New York City. Over 700,000 customers lost power across the five boroughs. The storm’s impact on our power system was so pervasive that it destroyed existing power capability in a significant number of hospitals, nursing homes, adult care facilities, public housing residences and beyond to the level that restoration would require much more than simply getting the utilities back up and running. It would require tedious, time-consuming and difficult rebuilding of the electrical systems within almost all of the flooded basements of these structures.

Debris immediately became a big issue. It was strewn across streets, on private property, in parks and public places, on beaches and in our waterways. More than 40,000 buildings and homes were destroyed or severely damaged and many others burned to the ground. Some residences would have to be completely demolished. More than 20,000 trees and limbs were knocked down throughout the city; 200,000 cubic yards of sand washed from the beaches into the streets and neighborhoods, and 3,500 cars and boats were destroyed. To date more than 2 million cubic yards of debris was generated by Sandy’s impact. To put that in perspective, it took only 62,000 cubic yards of concrete to build NYC’s iconic Empire State Building.

An unprecedented life sustainment and humanitarian mission began in mid-November. The National Guard and volunteers, with support of City agencies, visited every residential unit in the impacted areas. Teams handed out information, food, water, heaters and blankets. As it got colder those impacted were offered warmer places to stay, such as hotel rooms. Residents were checked on multiple times until their homes had heat and power. In all, the teams made some 140,000 visits.

Lastly, more than 19,000 homes have had power and heat restored at no cost to the homeowner through an innovative program called NYC Rapid Repairs, which has allowed many of those affected by Sandy to remain in their homes and begin rebuilding their lives where they lived before Sandy’s destruction upended them.

Sandy taught all of us that major catastrophes, whether natural or man-made, will present challenges of enormous proportion. Being prepared for the unknown occurring under inconceivable pressure is what we all need to expect. Getting big enough fast enough is the goal. In order to be able to accomplish this goal, we in the emergency management field along with our agencies, elected leaders and partners in and out of government need to establish the mechanisms and have in place structures, locations and technology that can be flipped on as quickly as needed to become large enough to pay attention to the emerging issues and solve them. We need also to have the relationships, agreements and acceptance from our colleagues that this planning is essential, potentially to our survival.

I am convinced from our work in New York City during Sandy, and from the lessons we have learned and will learn, that governments along with all of their partners and supporters can meet the massive and multifaceted challenges of high-impact events with a massive and organized response and recovery effort. It will all start with the activations of the substantial operational plans that already exist and the opening of the Emergency Operations Centers extant in all of the major population centers around our country. The effort will be coordinated by the fiercely resilient and innovative emergency managers who have the training and skills to think and act big when needed. We can and will get big enough fast enough to protect those in our charge. We have no alternative.