Homeland security in the Asian and African markets in 2013 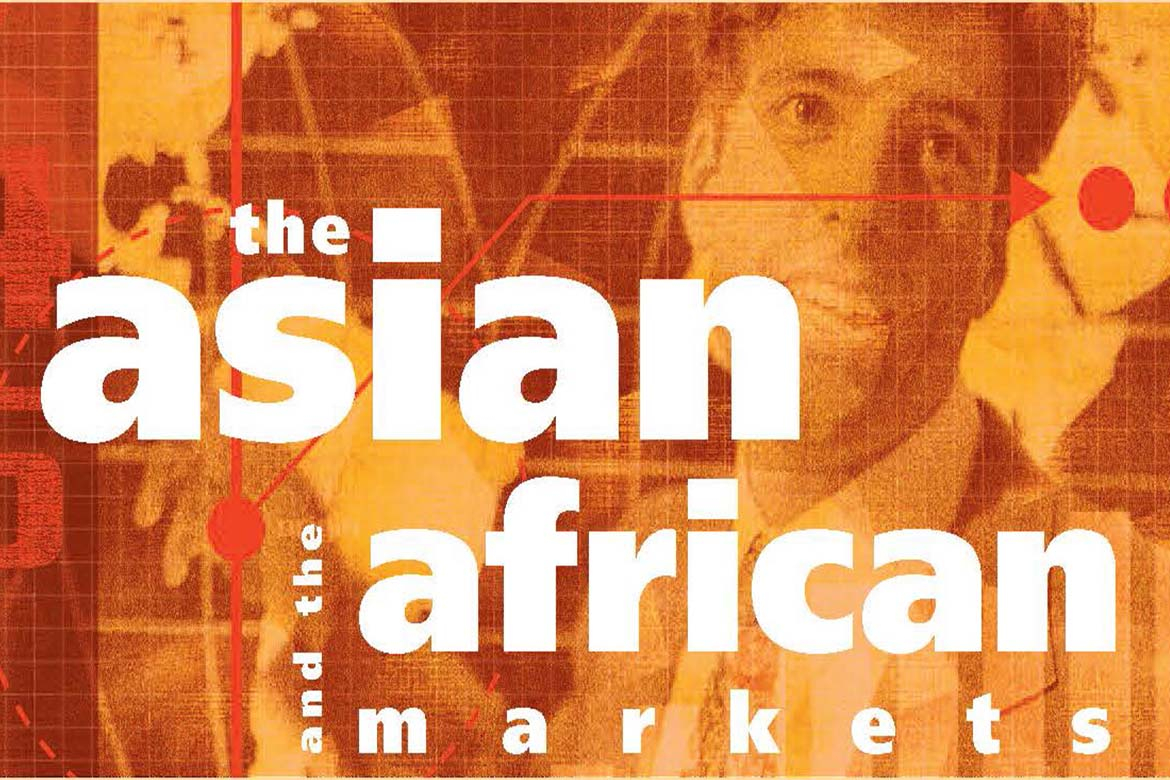 The Asian and African markets

Asia is now the most coveted homeland security and defence market in the world, a market valued in excess of $1 trillion. Now all eyes, including those in Asia, are turning to Africa. Along with many US and European firms, China and India are in fierce competition to win over key African homeland security contracts. With steady growth and increasing potential, especially in the security markets, the continent has become an attractive option to companies worldwide looking for unparalleled growth opportunities abroad.

Together, Africa and Asia cover 50% of the world’s landmass and make up 22% of the world’s defence market; these are two homeland security and counter terror markets which cannot be ignored.

Along with the fast pace of growth in these economies comes the ability for consumers to purchase newer and better security solutions and technologies. Increased investment creates the need to protect infrastructure critical to the economy, especially in the energy and tourism sectors.

Exploring Asian markets, with a global focus on India

Asia, as the current driver of the global economy, has new and challenging security needs, which is creating immense opportunity for the homeland security and defence industries. With a population of over 1 billion people, the 3rd largest purchasing power parity in the world, and alongside its political and Ethno-religious tensions, India is now facing constant threats both internally and externally. Although the revamp of the Indian homeland security infrastructure has been underway for over 10 years, the past few years have seen modernisation undertaken with a sense of urgency, especially since events in the past decade have revealed its underlying vulnerability, such as the Mumbai attacks in 2008.

More recently, the Indian government has overseen enormous investment in the counter terror and homeland security arena. India is now transforming from a purely defence market into a homeland security market. This is due to large scale growth in infrastructure and foreign investment and concerns to keep borders safe. More specifically, HLS forces in India are substantial in size, approximately equal to the active military troops of the US, UK, Germany and France combined. Therefore, modernisation of these forces has created a huge demand for new equipment, tactics and training.

Securing critical infrastructure, including tourism related infrastructure such as airports and hotels, has become a national priority.

India has 60 airports, most of which are undergoing modernisation and security redevelopment. Mainly due to internal threats, paramilitary and police forces of Central and State Governments are likely to be the biggest spenders in coming years. According to studies, the 2010 market for electronic security products (surveillance, CCTV) for private industry was almost $800 million, growing by an impressive 26% a year. The incredible pace of change cannot be ignored.

Why Africa as a potential market?

Graph showing the Military Expenditure in Africa in Billions of Dollars. Africa’s growth in this field has continued to grow over the past 7 years, reaching almost 40 billion in 2012. North Africa continues to make up an increasing percentage of the continent’s total expenditure.

Due to years of rapid growth and development, certain Asian and Middle Eastern markets are already considered mature; already “emerged”. However, the view of Africa is a continent rife with conflict, stifled development and poverty. This view is quickly changing. The IMF predicts that no continent will grow as quickly over coming years. Foreign Direct Investment (FDI) into Africa increased by 5.5% last year, reaching $38 billion, despite the total to developing countries falling by about 7%. The increasingly interdependent relationship between Asia and Africa has served as one catalyst for Africa to develop the necessary economic and homeland security infrastructure required for further investment and development. Africa is now the major centre of a global competition, with China and India at the forefront, all attracted by the mineral resources and investment opportunities available.

Just as Asian countries have done, it is expected that over the next few decades, African countries, fuelled by economic growth and compulsion to protect critical economic assets, will spend robustly on the development and consolidation of their security architecture and invest heavily in modernisation of their armed forces and law enforcement agencies.

According to the Israel Export and International Co-operation Institute, African homeland security spending is expected to reach $344.5 billion in 2022 up from $178 billion in 2010, with “significant growth in aviation security, communications, data and cyber security and counter terrorism”.

Opportunities for international companies to win contracts in Africa are now growing faster than ever before. The modernisation of existing security systems and defence in African inventories can be just as important as the procurement of complete new security systems. Modernisation is a key opportunity for African governments as they are constantly competing to attract more tourism, which includes securing infrastructures such as airports, hotels and embassies.

Currently, the urgent security issues which need facing across the continent are broadly similar to those facing Asian countries: critical infrastructure, including energy security as a focus; border security and crime control; and, thirdly, counter terror. Whilst militarised violence has decreased around Africa, criminality has increased. Africa has become a major transit hub for drugs trafficking across the continent and into Europe, commodity smuggling including oil bunkering and blood diamonds, and illegal weapons trade. Marine piracy has seen an overall decrease but it is still a critical security issue. International forces have been deployed extensively to counter this; however, they have been cut down substantially over the last few years. Therefore, there is an urgent need for localised forces to train and deploy homegrown trained forces.

North Africa’s military expenditure increased more than any other region in the world (in terms of average annual expenditure) with approximately a 14% increase between 2009 and 2012. Algeria is the top spender on defence and homeland security in Africa; over the period 2003–12, spending increased by 189%, reaching approximately $10 billion in 2012. Such an increase has been linked to the terrorist threat by terrorist group AQIM, who target military and police in deadly attacks. This has caused the Algerian government to strengthen border cooperation with Mali and Libya. The government has increased military personnel to patrol borders in 2012 and increased surveillance and checkpoints to track drug trafficking, arms trading and militant groups.

In 2013, terrorists called the Signatories in Blood attacked a BP plant in Algeria, which killed almost 80 people and is considered the worst attack in the oil and gas industry in modern history. This attack and many others have driven the government to invest in an even larger defence budget, and imports from global markets are increasing.

Increasing global energy demands and rising prices mean the necessity for increased exploration in high-risk areas, like North Africa. The global market for oil and gas infrastructure security is expected to be worth $28.44 billion, according to market analyst Visiongain. Thus, especially in North Africa, the market for security products and services, especially those aimed at protecting critical assets in Upstream, Midstream and Downstream industries, is displaying immense growth.

West Africa also faces serious security issues, is continuously increasing its homeland security and defence budgets, and West African states have begun to increase imported security solutions from international companies. Like North Africa, West Africa supplies the global market with a large share of oil, gas and mineral resources. A threat to both domestic and international economies is “oil bunkering”, the illegal theft of oil.

On the coast, the Movement for the Emancipation of the Niger Delta has been targeting international oil companies from kidnappings to attacks on pipelines and thefts of millions of dollars’ worth of oil.

Like other West African nations, piracy is a serious issue, not only causing millions of dollars in theft and damage, but many fatalities every year. In the North, religious extremist and terrorist group, Boko Haram, is notorious for attacking civilians, police and government.

Nigeria is expected to invest heavily in surveillance and intelligence technologies such as electronic identification, e-passports, automated border crossing systems and CCTV systems.

An important way to navigate these markets is to find a partner, whether that be a governmental partner, local partner who is already manufacturing in the market, or an international partner to share contacts and experience. It is useful to mitigate genuine risks, to build real relationships on the ground, gain reputation and to have local people involved who understand domestic culture, who know the requirements.

An important first step before considering entering these markets is to make the right contacts with key buyers and decision makers in the country, and find out if there is a market there for your product or service. Summits and exhibitions are growing every year in scale, as it is easier for buyers and suppliers to meet in one location rather than spend months travelling in search of business partnerships. According to Mr Jim Catchpole from Strongfield Technologies, the “prime benefit is networking, we have brand new companies, and we recommended they go to the conference. If you start thinking of the time and money, the 2-3 months you would need to get around a country like India to meet all of these people, you can meet them all in one place, which makes it worth the investment”.

Summits and conferences can provide an insight into the Asian and African markets and can offer talks, networking and exhibitions, bespoke matchmaking services, private meetings, and consultancy services.