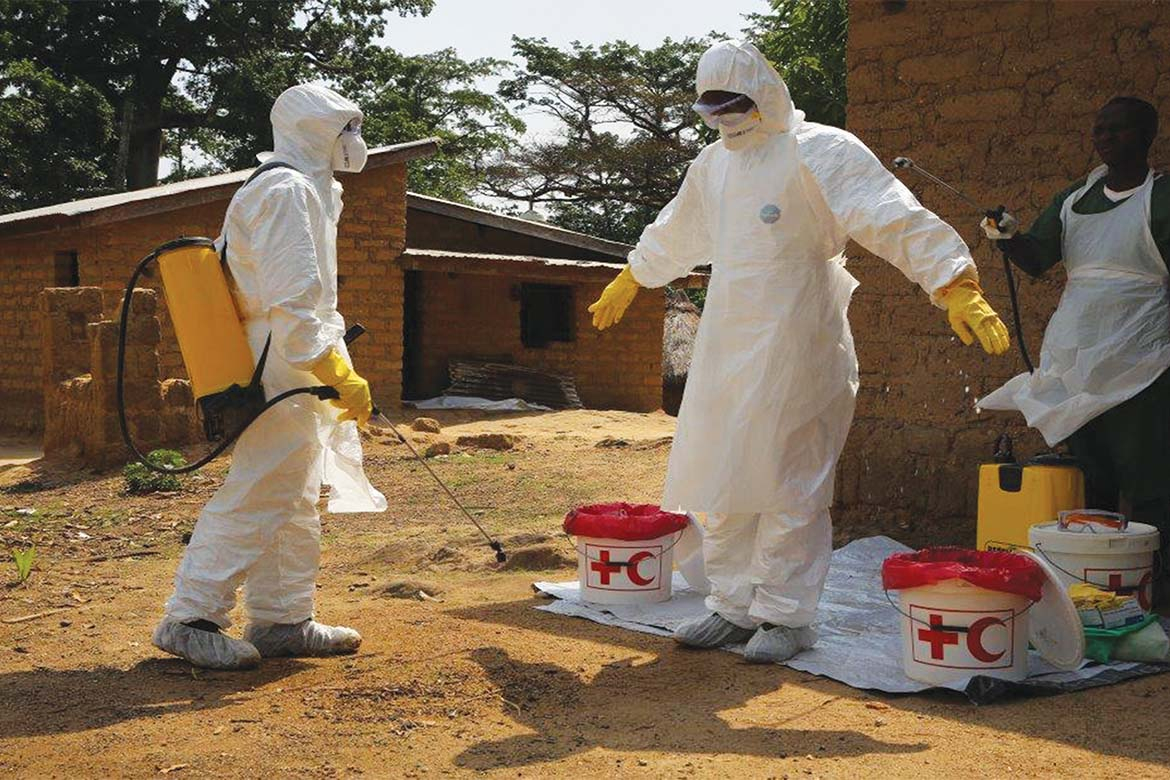 How to deal with Ebola – a global threat

The current Ebola outbreak in Africa serves as a reminder that we cannot take for granted the security of our borders from such events. It has become clear since the outbreak started that there was no clear international response strategy in the initial stages. Local Medical Centres had to face the outbreak head on with limited financial support. In some instances Ebola ward nurses were not paid the extra few dollars of ‘danger money’ for them to work with patients. Consequently the nurses did not turn up for work, which left the doctors to treat patients whilst clearing up body fluids from the floors – some doctors contracted the virus and died. This is a case where tactical mistakes have strategic consequences.

Even now, some 11 months into the outbreak, the UN, MSF and other NGO organisations are still struggling to contain the virus, which has the potential to continue to gain a significant foothold in populations in West Africa. According to the WHO and CDC, the peak of the virus is likely to be in the late spring or summer of 2015. This leaves the world exposed to the potential for viral transmission from aid, media or other workers returning home and migration of the indigenous populations looking for safe havens and ‘better’ medical care. In recent weeks it has been reported that there has been a downturn in the number of reported cases and deaths from the virus in the region.

This information must be taken in context. From our experience on the ground supporting media and NGOs, the reality is that local people are not going to the care facilities as they fear them and are unable to undertake the ritual burial procedures once victims are admitted. It has meant that Ebola has potentially ‘gone underground’ and the ability of the world’s health agencies to monitor and contain its progress has been impeded. This, coupled with recent events in Sierra Leone where thousands of ‘quarantined’ people left their homes to find food, has prevented aid agencies from meeting the demand for food to reach the most affected. Some reports predict that if the outbreak is not contained by the end of December then much, if not all, of Africa could be affected and Ebola will be an issue that we will all have to live and respond to for many years.

We have been engaged with the Ebola issue since the outbreak started.  It is clear that a lack of preparation and inability of the International Community to respond in the early stages has contributed to the virus gaining a hold. Corporately we must learn from this and take appropriate steps to implement polices, procedures and training in order to mitigate the effects of an event that directly affects our own businesses and personnel, either in Africa, or even on our own doorsteps.

The time to invest in refreshing current policies, procedures and training is now. The financial effects of not planning and preparing could be serious in the short and long terms. In addition, there are equally or more serious implications for corporate managers who could be accused, including in court, overseas or at home, of not fulfilling their duty of care to their staff, customers or other third parties should deaths result directly from inaction.

Together we have developed a portfolio of risk assessment tools and courses to help support organisations in their planning, implementation of policies and operational delivery. We believe the following responses can create a cohesive and robust response for an organisation:

Knowledge and awareness among all staff are an essential ingredient, as is empowerment at all appropriate levels.

Do not underestimate the time it takes to appropriately train and inform people.  Practical training includes Personal Protective Equipment, Personal Hygiene Procedures, Work Place Security and Decontamination Procedures, and this training is best deployed as a result of defined ‘triggers’.

Policies, procedures, equipment and swift diagnosis should be deployable at short notice in order to support the health care and security teams supporting your employees. There are capabilities available now that can provide a diagnosis within the hour, enabling swift and decisive actions to be taken with regards to the way in which a patient is ‘contained’ and treated.

Many of the symptoms of Ebola are similar to other illnesses; the key is rapid identification in order to dispel scaremongering amongst employees and other personnel that may have come in to contact with the patient.

A review of current policies, procedures and decision-making tools should be carried out in order to ensure swift and appropriate actions are taken. These should be driven by a risk assessment approach, and the risks should be assessed in the light of the threats to the people and the business. Many, or most, large businesses operating globally or regionally out of the UK are sustained not just by the staff in the headquarters country, but more and more by the host country or regional staff in the overseas areas of operations. Those staff are the ones who travel within and between countries and, therefore, in an Ebola context, are the ones most like to catch Ebola; if they do, then they cannot work, and if they cannot work then the business fails.

A review of insurances and corporate responsibilities should be undertaken in order to ensure adequate protection.

Action needs to be taken now, and enacting an Ebola response at the earliest opportunity will ensure an organisation has the ability to take timely, well-informed and appropriate decisions in order to safeguard both the business interests and its employees and affected third parties.

Part 2 -Time to prepare and communicate

For any potential crisis away from home soil, whether terrorist, natural disaster or plague, all sorts of precautions and preparations are required, and this is not the article to rehearse all of those. However, just for illustration in this particular crisis, it is sensible to identify or even contract with one or more medical air evacuation companies, preferably one based in the developed country where the corporate client is headquartered. Such companies can not only offer the obvious practical support but will also be up to speed with the latest national, or even sub national, rules affecting the arrival of suspected or actual Ebola victims, or even those who just happen to have returned from an area that might have been affected.

They will also know what the alternatives are if the primary destination is not accepting such people. With that thought in mind, you may recall Nurse Kaci Hickox, who returned to her home in Maine after treating people in Sierra Leone, to an enforced quarantine despite having no identifiable symptoms and a negative test. The Governor of Maine was pursuing legal action to have her isolated at home, even while she was defying the ban and cycling to and from the shops accompanied by a cavalcade of reporters.

Amusingly as the story was portrayed, there was a serious message: people can be scared easily, and, who knows, sometimes with good cause. Fear can undermine common sense unless the community, whether of a nation or of a company, is informed using clear communications backed by demonstrable risk assessment and risk mitigation measures.

The State of Maine was a response ‘guinea pig’ in this story, and cannot be blamed for working with the best information available at the time, but with hindsight how much better it would have been had it stated the following clearly in advance:

The risk assessment would be informed by experience: how many cases; the provenance of such cases; the capability to contain an outbreak and how quickly; the realistic likelihood, nature and impact of the spread of Ebola from one case, two cases, ten cases, a hundred cases or more in Maine. And so on. If all knew the required response in advance, then most people would agree and comply. Most people would know and accept that a new problem like Ebola required an element of untested planning, but the information given out in advance would be the key to a manageable response by the authorities.

At the time of that event, about 5,000 had died of the disease in West Africa, but only nine had been treated for the virus anywhere in the USA. From a risk perspective that and the other factors, even including that she was an Ebola nurse and that the 21 day incubation period had not ended, might have caused the authorities to judge that the risk of an outbreak was too low for a full home quarantine, and that the risk to close family members was best handled by close family common sense.

Ebola in a corporate context

To put that into a corporate context, one has to look not much further than the approach we all took to the various Avian flu and MERS threats, and that many companies are still taking. The response was and is considered to be a business continuity one. That approach identifies triggers and consequent responses.

For example, as a simplified illustration, if there is an outbreak somewhere in the world and if there is a chance that it could affect our company, we review our plans. If one person catches the virus in one of our countries we increase our precautions and advice.

If there is an outbreak elsewhere in the country, we start to thin out the staff so that some non-essentials work at home. If the outbreak comes nearer to us, then we open up a recovery building and split the key staff between there and HQ. Next step: split up the key staff further and send some of them to work from home. And, the rest of the story will be familiar to many, we head towards a close down, passing whatever key functions we can to our offices, factories and distribution centres in other cities or countries. All that needs to be in place with people informed, briefed, trained and tested well in advance. The Ebola threat demands the same approach; the difference is mainly in the perception that Avian flu is ‘familiar’ and Ebola is a particularly nasty way to go.

We are committed to working with our clients to deliver the most effective training, preparation, and business continuity solutions that enable maximum flexibility, whilst maintaining and protecting the workforce to ensure that business can continue in the most effective and efficient manner.

The two companies have been working jointly for some months, using their respective capabilities to prepare and train clients to minimise the risks of their operations in or near Ebola affected areas.