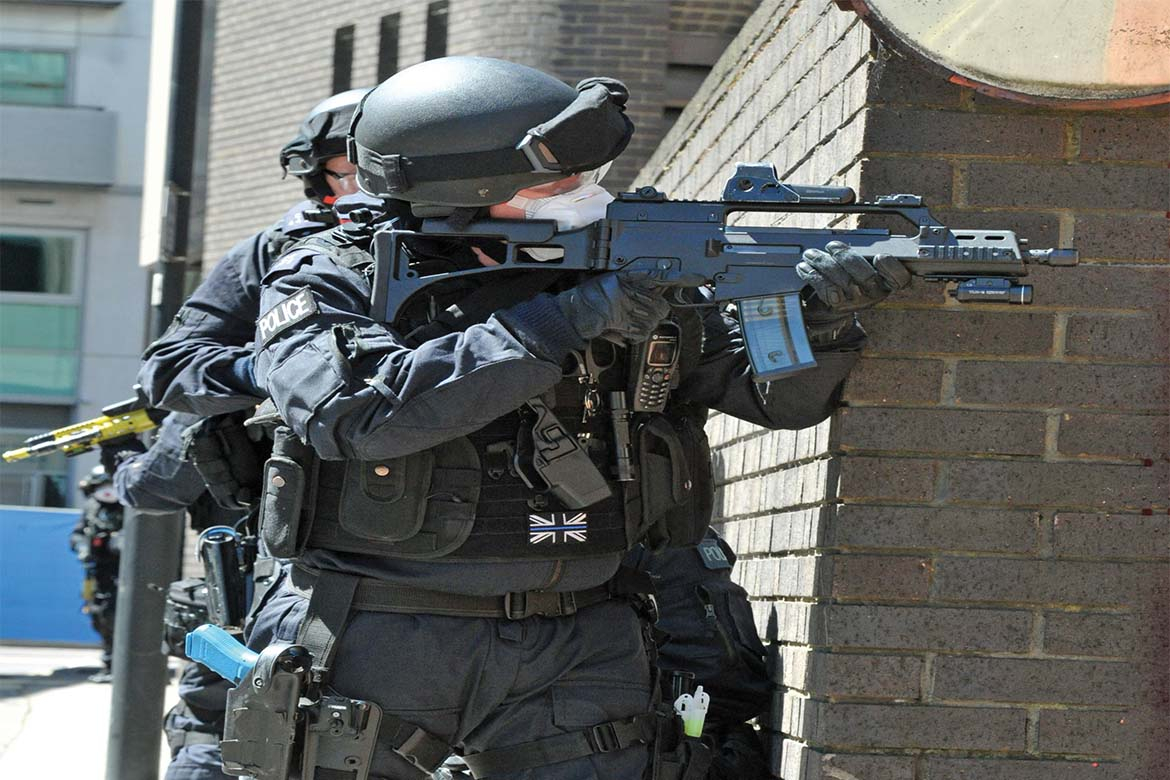 The prospect of armed attacks by terrorists will remain on the threat landscape for the foreseeable future.

Although firearms incidents have always featured as a potential scenario, events in Europe have brought this prospect much closer to British shores. Regardless of whether an attack is committed by a lone actor or more organised groups, both have the potential to cause significant casualties and widespread fear which is, of course, the essence of terrorism itself. This article suggests measures organisations can take to improve their contingency plans for armed attacks, drawing on the example set by the authorities.

In the United Kingdom the Civil Contingencies Act requires that statutory responders collaborate and there are long-standing arrangements in place to exercise contingency plans in simulated terrorist scenarios. The value of these is in ensuring they are relevant to contemporary threats and as a consequence firearms attack simulations are increasingly delivered in urban environments. Inevitably, they become high profile events, attracting significant media and public attention.

In June 2015 an exercise which had been six months in the planning was staged at various sites in London involving armed gunmen. This took on added significance as it occurred days after the awful attack in Sousse, Tunisia. On the eve of the exercise, the Prime Minister advised the House of Commons that, “Over the next two days our security forces and emergency services will stage a major exercise to test and refine the UK’s preparedness to deal with a serious terrorist attack.”

Delivering an exercise involving automatic weapons, in the heart of the capital, at a time of an existing Severe threat was a complex and hazardous task. However, if an exercise is going to have value it should aim for realism so that participants are immersed and true learning is gained. The media were given a degree of access to activity at the disused Aldwych underground station and it was widely reported that all of London’s emergency services, Whitehall partners and resilience agencies took part. Since then other cities, notably Glasgow and Manchester, have conducted similar exercises and in the current climate they are likely to continue.

What are the lessons that organisations can draw from these events?

The emergency services work hard to develop their contingency plans but confidence in operational effectiveness can only be gained once plans are tested. Although the authorities are mandated to conduct full scale live exercises for businesses they are highly disruptive and a time-consuming distraction. If not managed carefully the focus can shift to delivering an “exercise event” rather than the true purpose which is to assess whether plans are likely to work in a real scenario.

Testing should be seen as a programme of continuous improvement

The starting point is to have detailed contingency plans with clear explanations about the roles and responsibilities required. There are various ways to develop individual competence and to validate plans.

Frequent table-top exercises, delivered in numerous forms and aimed at various command levels, are extremely valuable, continually posing “what if?” type scenarios in various configurations. These can be aimed at single site locations, multi-tenanted buildings and so forth. It is also possible to introduce a degree of realism and time pressure without causing substantial interference with core business. The key point is to test capacity and capability to deliver the stated intention of the plan. As lessons are learned arrangements should be refined, developed and the cycle begins again.

The reality is that a terrorist attack will never match the neat contours of a polished plan. Firearms and weapon attacks are fast moving events which present a myriad of challenges to contend with. The authorities have issued “Stay Safe” guidance and advice based on the principles of “Run, Hide, Tell”. Therefore, an important consideration is the initial reaction.

It’s imperative that first responders, in any organisation, are equipped with knowledge, skill and authority

They have to be able to think rapidly and flexibly so they make the correct tactical decisions to minimise harm.

To achieve this takes a degree of investment in raising the capability of frontline security teams but also empowering them with confidence to act and the authorisation to direct the entire organisation in the immediacy of a critical situation.

A particular challenge is to maintain effective communication

Testing in advance helps to reveal the flaws or barriers impeding the information flow. This is applicable at two levels. Tactically, it is vital that viable arrangements exist to swiftly warn and inform those caught up in the incident, but thereafter, informed strategic briefings will need to be provided upwards and frequently internationally for companies with global operations.

In all cases messaging must be accurate and relevant. Yet it is reported that executive boards struggle to find the time to devote to exercising and the reasons for this are understandable. However, given the current threat picture, which shows little likelihood of abating any time soon, the question is can organisations afford not to exercise?

Even in the direst of circumstances there is always scope to take positive action where there has been the foresight to adequately plan and prepare.

Former Detective Chief Superintendent and member of the Security Institute